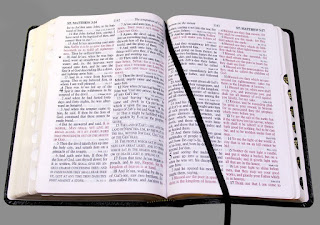 Gen 40:1 It happened after these things, that the butler of the king of Egypt and his baker offended their lord, the king of Egypt.
Gen 40:2 Pharaoh was angry with his two officers, the chief cupbearer and the chief baker.
Gen 40:3 He put them in custody in the house of the captain of the guard, into the prison, the place where Joseph was bound.
Gen 40:4 The captain of the guard assigned them to Joseph, and he took care of them. They stayed in prison many days.
Gen 40:5 They both dreamed a dream, each man his dream, in one night, each man according to the interpretation of his dream, the cupbearer and the baker of the king of Egypt, who were bound in the prison.
Gen 40:6 Joseph came in to them in the morning, and saw them, and saw that they were sad.
Gen 40:7 He asked Pharaoh's officers who were with him in custody in his master's house, saying, "Why do you look so sad today?"
Gen 40:8 They said to him, "We have dreamed a dream, and there is no one who can interpret it." Joseph said to them, "Don't interpretations belong to God? Please tell it to me."
Gen 40:9 The chief cupbearer told his dream to Joseph, and said to him, "In my dream, behold, a vine was in front of me,
Gen 40:10 and in the vine were three branches. It was as though it budded, its blossoms shot forth, and its clusters brought forth ripe grapes.
Gen 40:11 Pharaoh's cup was in my hand; and I took the grapes, and pressed them into Pharaoh's cup, and I gave the cup into Pharaoh's hand."
Gen 40:12 Joseph said to him, "This is its interpretation: the three branches are three days.
Gen 40:13 Within three more days, Pharaoh will lift up your head, and restore you to your office. You will give Pharaoh's cup into his hand, the way you did when you were his cupbearer.
Gen 40:14 But remember me when it will be well with you, and show kindness, please, to me, and make mention of me to Pharaoh, and bring me out of this house.
Gen 40:15 For indeed, I was stolen away out of the land of the Hebrews, and here also have I done nothing that they should put me into the dungeon."
Gen 40:16 When the chief baker saw that the interpretation was good, he said to Joseph, "I also was in my dream, and behold, three baskets of white bread were on my head.
Gen 40:17 In the uppermost basket there was all kinds of baked food for Pharaoh, and the birds ate them out of the basket on my head."
Gen 40:18 Joseph answered, "This is its interpretation. The three baskets are three days.
Gen 40:19 Within three more days, Pharaoh will lift up your head from off you, and will hang you on a tree; and the birds will eat your flesh from off you."
Gen 40:20 It happened the third day, which was Pharaoh's birthday, that he made a feast for all his servants, and he lifted up the head of the chief cupbearer and the head of the chief baker among his servants.
Gen 40:21 He restored the chief cupbearer to his position again, and he gave the cup into Pharaoh's hand;
Gen 40:22 but he hanged the chief baker, as Joseph had interpreted to them.
Gen 40:23 Yet the chief cupbearer didn't remember Joseph, but forgot him.

Mat 20:1 "For the Kingdom of Heaven is like a man who was the master of a household, who went out early in the morning to hire laborers for his vineyard.
Mat 20:2 When he had agreed with the laborers for a denarius a day, he sent them into his vineyard.
Mat 20:3 He went out about the third hour, and saw others standing idle in the marketplace.
Mat 20:4 To them he said, 'You also go into the vineyard, and whatever is right I will give you.' So they went their way.
Mat 20:5 Again he went out about the sixth and the ninth hour, and did likewise.
Mat 20:6 About the eleventh hour he went out, and found others standing idle. He said to them, 'Why do you stand here all day idle?'
Mat 20:7 "They said to him, 'Because no one has hired us.' "He said to them, 'You also go into the vineyard, and you will receive whatever is right.'
Mat 20:8 When evening had come, the lord of the vineyard said to his manager, 'Call the laborers and pay them their wages, beginning from the last to the first.'
Mat 20:9 "When those who were hired at about the eleventh hour came, they each received a denarius.
Mat 20:10 When the first came, they supposed that they would receive more; and they likewise each received a denarius.
Mat 20:11 When they received it, they murmured against the master of the household,
Mat 20:12 saying, 'These last have spent one hour, and you have made them equal to us, who have borne the burden of the day and the scorching heat!'
Mat 20:13 "But he answered one of them, 'Friend, I am doing you no wrong. Didn't you agree with me for a denarius?
Mat 20:14 Take that which is yours, and go your way. It is my desire to give to this last just as much as to you.
Mat 20:15 Isn't it lawful for me to do what I want to with what I own? Or is your eye evil, because I am good?'
Mat 20:16 So the last will be first, and the first last. For many are called, but few are chosen."
Mat 20:17 As Jesus was going up to Jerusalem, he took the twelve disciples aside, and on the way he said to them,
Mat 20:18 "Behold, we are going up to Jerusalem, and the Son of Man will be delivered to the chief priests and scribes, and they will condemn him to death,
Mat 20:19 and will hand him over to the Gentiles to mock, to scourge, and to crucify; and the third day he will be raised up."
Mat 20:20 Then the mother of the sons of Zebedee came to him with her sons, kneeling and asking a certain thing of him.
Mat 20:21 He said to her, "What do you want?" She said to him, "Command that these, my two sons, may sit, one on your right hand, and one on your left hand, in your Kingdom."
Mat 20:22 But Jesus answered, "You don't know what you are asking. Are you able to drink the cup that I am about to drink, and be baptized with the baptism that I am baptized with?" They said to him, "We are able."
Mat 20:23 He said to them, "You will indeed drink my cup, and be baptized with the baptism that I am baptized with, but to sit on my right hand and on my left hand is not mine to give; but it is for whom it has been prepared by my Father."
Mat 20:24 When the ten heard it, they were indignant with the two brothers.
Mat 20:25 But Jesus summoned them, and said, "You know that the rulers of the nations lord it over them, and their great ones exercise authority over them.
Mat 20:26 It shall not be so among you, but whoever desires to become great among you shall be your servant.
Mat 20:27 Whoever desires to be first among you shall be your bondservant,
Mat 20:28 even as the Son of Man came not to be served, but to serve, and to give his life as a ransom for many."
Mat 20:29 As they went out from Jericho, a great multitude followed him.
Mat 20:30 Behold, two blind men sitting by the road, when they heard that Jesus was passing by, cried out, "Lord, have mercy on us, you son of David!"
Mat 20:31 The multitude rebuked them, telling them that they should be quiet, but they cried out even more, "Lord, have mercy on us, you son of David!"
Mat 20:32 Jesus stood still, and called them, and asked, "What do you want me to do for you?"
Mat 20:33 They told him, "Lord, that our eyes may be opened."
Mat 20:34 Jesus, being moved with compassion, touched their eyes; and immediately their eyes received their sight, and they followed him.
Email ThisBlogThis!Share to TwitterShare to FacebookShare to Pinterest
Newer Post Older Post Home