From Gary... The Gates of Hell 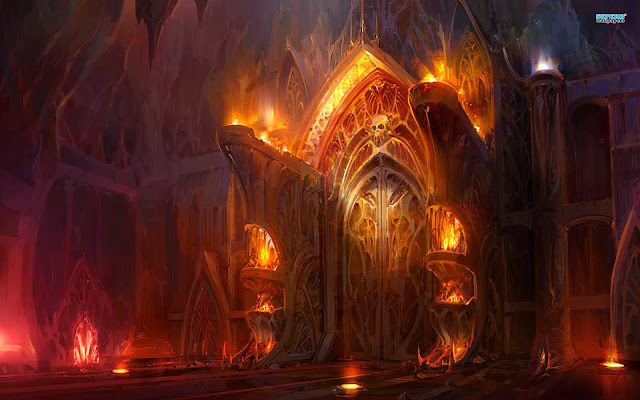 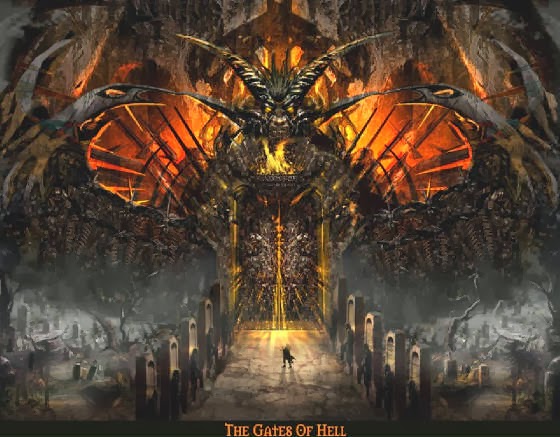 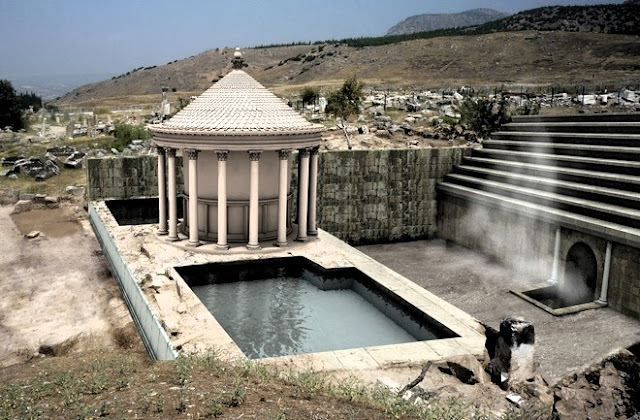 This morning about 7:30, as I sat down at the computer, I looked out my window and saw that the sky was a weird color orange.  A menacing, brownish orange with tints of red to add an ominous portent to the scene.  It was a little unsettling, but then it disappeared as the sky turned black and the rain began.  Since it was obvious that my dogs would have to wait for awhile (before their morning walk), I began thinking about my topic for today- and then I saw the bottom of the three pictures shown above.  It is a picture of the ancient site of the gate of hell in heiropolos, Turkey.  For some information about this, see the article at Wikipedia:  http://en.wikipedia.org/wiki/The_Gates_of_Hell.  Then I found the top two pictures, which are, of course, an artist's idea of what this might be.

Luke, Chapter 16 (LITV)
19 And there was a certain rich man; and he was accustomed to don a purple robe and fine linen, making merry in luxury day by day.  20 And there was a certain poor one named Lazarus who had been laid at his porch, being plagued by sores,  21 and longing to be filled from the crumbs that were falling from the table of the rich one. But coming, even the dogs licked his sores.  22 And it happened, the poor one died and was carried away by the angels into the bosom of Abraham. And the rich one also died and was buried. 23 And being in torments in Hell, lifting up his eyes, he sees Abraham afar off and Lazarus in his bosoms. (emp added GDR) 24 And calling he said, Father Abraham, have pity on me and send Lazarus that he may dip the tip of his finger in water and cool my tongue, for I am suffering in this flame.  25 But Abraham said, Child, remember that you fully received your good things in your lifetime, and Lazarus likewise the bad things. But now he is comforted, and you are suffering.  26 And besides all these things, a great chasm has been fixed between us and you, so that those desiring to pass from here to you are not able, nor can they pass from there to us.  27 And he said, Then I beg you, father, that you send him to my father's house;  28 (for I have five brothers, so that he may witness to them, that they not also come to this place of torment).  29 Abraham said to him, They have Moses and the Prophets, let them hear them.  30 But he said, No, father Abraham, but if one should go from the dead to them, they will repent.  31 And he said to him, If they will not hear Moses and the Prophets, they will not be persuaded even if one from the dead should rise. (emp added GDR)

Which of the three pictures most accurately represents reality?  Right now, only God (and of course, those consigned to Hell) know.  That there will be a judgment and a condemnation of some is a basic tenet of most of the major religions in the world.  How not to get to that place of torment is a matter of controversy in this world, but I choose to listen to Jesus (verses 29-31 above).  I pray that neither you or I will never enter the gates of hell and to avoid that awful fate, I encourage you to read your Bible and do what it tells you to do!!!  Scared yet?  We all should be, because HELL is a real place and once sentenced there, you are there FOREVER!!!  Where to from here?  Well, in this world, attitude is the beginning of EVERYTHING!!!  If you are interested in your eternal fate, start by reading the first Gospel Sermon and taking it from there!!!  And remember, be careful out there....

8 Be sensible, watch, because your adversary the Devil walks about as a roaring lion seeking someone he may devour;  9 whom firmly resist in the faith, knowing the same sufferings are being completed in your brotherhood in the world. (emp added GDR)
Email ThisBlogThis!Share to TwitterShare to FacebookShare to Pinterest
Newer Post Older Post Home