Beauty and something beyond the sky by Gary Rose 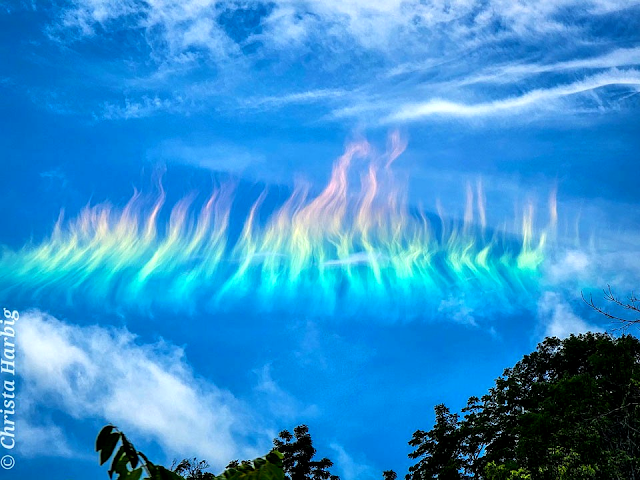 One of my favorite heavenly sights is that of a fire rainbow and this one is undoubtedly the very best one that I have ever seen. It really looks like that the rainbow is actually on fire; magnificent. As I looked at this rainbow, I remembered the words that John Denver sang in his “Rocky mountain high” song. I found this video on you tube with John singing and some beautiful pictures of Colorado – you might enjoy it, I did. 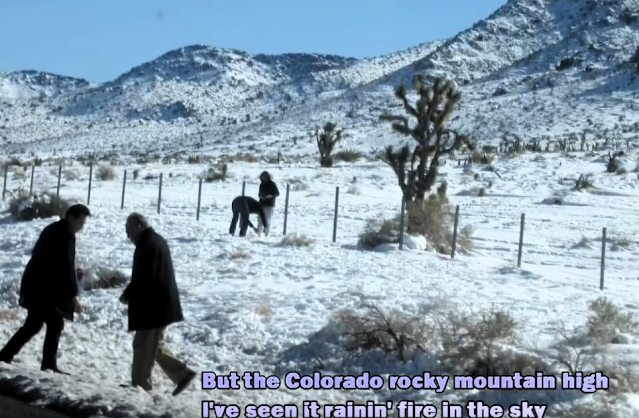 As beautiful as the rainbow is and those wonderful pictures of Colorado, I can only image the splendor of God in heaven and to be able to see Jesus, to look at him face to face and ask him questions. David, the great king of ancient Israel must have thought similar thoughts as he wrote the following…

1, By David. Yahweh is my light and my salvation. Whom shall I fear? Yahweh is the strength of my life. Of whom shall I be afraid?

2, When evildoers came at me to eat up my flesh, even my adversaries and my foes, they stumbled and fell.

3, Though an army should encamp against me, my heart shall not fear. Though war should rise against me, even then I will be confident.

4, One thing I have asked of Yahweh, that I will seek after, that I may dwell in the house of Yahweh all the days of my life, to see Yahweh’s beauty, and to inquire in his temple.

And then, there is this passage from the book of revelation...

1, This is the Revelation of Jesus Christ, which God gave him to show to his servants the things which must happen soon, which he sent and made known by his angel* to his servant, John,

2, who testified to God’s word, and of the testimony of Jesus Christ, about everything that he saw.

3, Blessed is he who reads and those who hear the words of the prophecy, and keep the things that are written in it, for the time is at hand.

4, John, to the seven assemblies that are in Asia: Grace to you and peace, from God, who is and who was and who is to come; and from the seven Spirits who are before his throne;

5, and from Jesus Christ, the faithful witness, the firstborn of the dead, and the ruler of the kings of the earth. To him who loves us, and washed us from our sins by his blood;

6, and he made us to be a Kingdom, priests* to his God and Father; to him be the glory and the dominion forever and ever. Amen.

7, Behold, he is coming with the clouds, and every eye will see him, including those who pierced him. All the tribes of the earth will mourn over him. Even so, Amen.

9, I John, your brother and partner with you in oppression, Kingdom, and perseverance in Christ Jesus, was on the isle that is called Patmos because of God’s Word and the testimony of Jesus Christ.

10, I was in the Spirit on the Lord’s day, and I heard behind me a loud voice, like a trumpet

11, saying, “*What you see, write in a book and send to the seven assemblies*: to Ephesus, Smyrna, Pergamum, Thyatira, Sardis, Philadelphia, and to Laodicea.”

12, I turned to see the voice that spoke with me. Having turned, I saw seven golden lampstands.

13, And among the lampstands was one like a son of man,* clothed with a robe reaching down to his feet, and with a golden sash around his chest.

14, His head and his hair were white as white wool, like snow. His eyes were like a flame of fire.

15, His feet were like burnished brass, as if it had been refined in a furnace. His voice was like the voice of many waters.

16, He had seven stars in his right hand. Out of his mouth proceeded a sharp two-edged sword. His face was like the sun shining at its brightest.

17, When I saw him, I fell at his feet like a dead man. He laid his right hand on me, saying, “Don’t be afraid. I am the first and the last,

18, and the Living one. I was dead, and behold, I am alive forevermore. Amen. I have the keys of Death and of Hades*.

Now, we know that from Isaiah 53 that Jesus wasn’t an attractive man as men define beauty, but I like to think that his beauty of one of the inner spirit. Just consider the words of the Beatitudes and I think you will agree with me. As I consider these things, I have more questions than answers, and frankly, I can’t wait to see Jesus and ask HIM questions until eternity ends. How about you?