A HARD HEART by Gary Rose 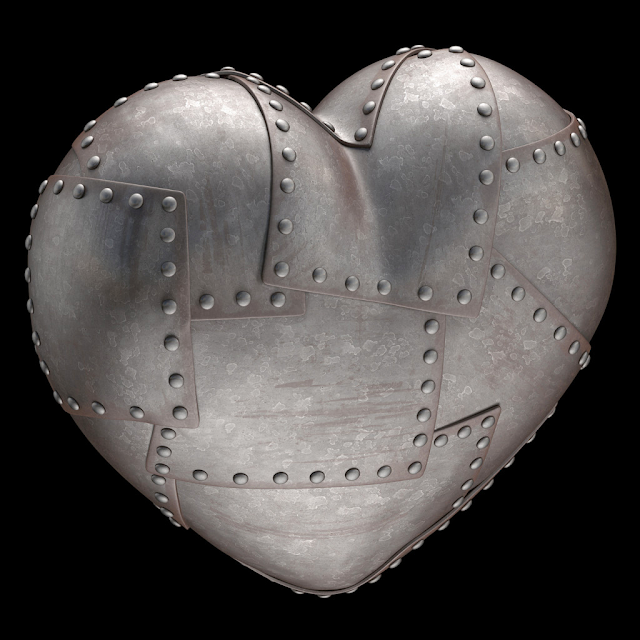 A hardened heart just doesn’t happen by accident. Yet, I imagine that only a very few people out there would admit to having a heart like the one above. I chose this picture because this heart was hardened by design. The metal was placed in the appropriate positions and fixed with rivets. And, those spots look to me like some sort of wash that would eliminate anything growing on it. In short, signed, sealed and delivered ( to Satan, of course ).

1 On that day Jesus went out of the house, and sat by the seaside.

2 Great multitudes gathered to him, so that he entered into a boat, and sat, and all the multitude stood on the beach.

3 He spoke to them many things in parables, saying, “Behold, a farmer went out to sow.

4 As he sowed, some seeds fell by the roadside, and the birds came and devoured them.

5 Others fell on rocky ground, where they didn’t have much soil, and immediately they sprang up, because they had no depth of earth.

6 When the sun had risen, they were scorched. Because they had no root, they withered away.

7 Others fell among thorns. The thorns grew up and choked them.

8 Others fell on good soil, and yielded fruit: some one hundred times as much, some sixty, and some thirty.

10 The disciples came, and said to him, “Why do you speak to them in parables?”

11 He answered them, “To you it is given to know the mysteries of the Kingdom of Heaven, but it is not given to them.

12 For whoever has, to him will be given, and he will have abundance, but whoever doesn’t have, from him will be taken away even that which he has.

13 Therefore I speak to them in parables, because seeing they don’t see, and hearing, they don’t hear, neither do they understand.

15 for this people’s heart has grown callous, their ears are dull of hearing, they have closed their eyes; or else perhaps they might perceive with their eyes, hear with their ears, understand with their heart, and should turn again; and I would heal them.’

16 “But blessed are your eyes, for they see; and your ears, for they hear.

19 When anyone hears the word of the Kingdom, and doesn’t understand it, the evil one comes, and snatches away that which has been sown in his heart. This is what was sown by the roadside.

20 What was sown on the rocky places, this is he who hears the word, and immediately with joy receives it;

21 yet he has no root in himself, but endures for a while. When oppression or persecution arises because of the word, immediately he stumbles.

22 What was sown among the thorns, this is he who hears the word, but the cares of this age and the deceitfulness of riches choke the word, and he becomes unfruitful.

23 What was sown on the good ground, this is he who hears the word, and understands it, who most certainly bears fruit, and brings forth, some one hundred times as much, some sixty, and some thirty.”

Some people just do not think spiritually and CANNOT-HEAR.

Some people have hardened their heart and have DETERMINED NOT-TO-HEAR.

Some people will hear and DO-SOMETHING-ABOUT-IT.

All this from a simple parable about a farmer that almost everyone can comprehend ( if they want to, of course ). Beyond this parable is a simple question: Is it possible for even the best of us to have a hardened heart at times? The answer is YES. Moses, when charged by God to deliver a message to Pharaoh, whined that he wasn’t a good speaker, so God gave him Aaron. Gideon simply couldn’t believe and asked for miracles. Jonah, when God told him to go to Nineveh, went in the opposite direction. And Peter even had the temerity to rebuke Jesus ( Matthew 16: 22 ).

God is patient with us and will work with us. Moses did lead the Israelite's out of Egypt, Gideon did win a great victory, the people of Nineveh did repent and Peter, eventually he came around too.

Today, take a good look at yourself realize that you are not perfect. God can work with you ( imperfections and all ). Just remember to cultivate a receptive heart and be willing to change.

God loves you and wants the very best for you.

Love HIM in return and be the very best you can be.