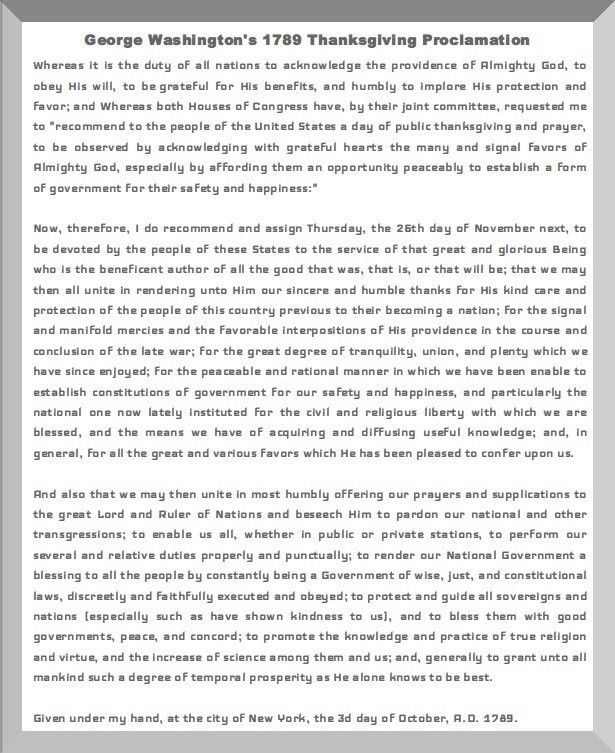 Today is thanksgiving; a special day set aside to thank God for all HE has done for us. To those who say this country was founded by deists, please read the above proclamation by our first president, George Washington.

Sooner or later, all will acknowledge God for who HE is and what HE has done for humanity.

11  I saw a great white throne, and him who sat on it, from whose face the earth and the heaven fled away. There was found no place for them.  12 I saw the dead, the great and the small, standing before the throne, and they opened books. Another book was opened, which is the book of life. The dead were judged out of the things which were written in the books, according to their works.  13 The sea gave up the dead who were in it. Death and Hades gave up the dead who were in them. They were judged, each one according to his works.  14 Death and Hades were thrown into the lake of fire. This is the second death, the lake of fire.  15 If anyone was not found written in the book of life, he was cast into the lake of fire.

9  After these things I looked, and behold, a great multitude, which no man could number, out of every nation and of all tribes, peoples, and languages, standing before the throne and before the Lamb, dressed in white robes, with palm branches in their hands.  10 They cried with a loud voice, saying, “Salvation be to our God, who sits on the throne, and to the Lamb!”   11  All the angels were standing around the throne, the elders, and the four living creatures; and they fell on their faces before his throne, and worshiped God,  12 saying, “Amen! Blessing, glory, wisdom, thanksgiving, (emphasis added) honor, power, and might, be to our God forever and ever! Amen.”

Give God thanksgiving; for what HE has done in this life and what HE will do in the next one!!! Be part of the spiritually blessed; obey his Gospel and live forever! See Acts, chapter 2, 1 Corinthians 15:1-4 and Romans 6:1-4 for more information on how to be saved from the lake of fire.
Email ThisBlogThis!Share to TwitterShare to FacebookShare to Pinterest
Newer Posts Older Posts Home
Subscribe to: Posts (Atom)