What are you really worth? 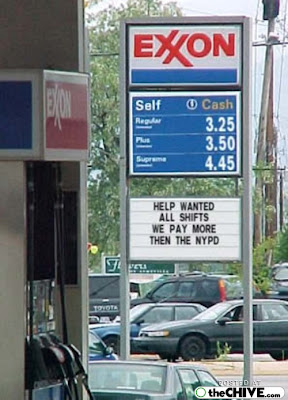 They may pay more than the NYPD, but it would seem they don't know the difference between a "then" and a "than". This sign does raise an interesting question: what are you really worth? I once worked for a pottery in central New Jersey and the plant manager told me that hiring employees was like buying a loaf of bread: "You pay what you have to in order to get the people you want". In the business world there are often a lot of different salaries for the same job, but what about the spiritual realm? The apostle Paul put it this way in his letter to the Philippians:
Php 2:5 Have this mind among yourselves, which is yours in Christ Jesus,
Php 2:6 who, though he was in the form of God, did not count equality with God a thing to be grasped,
Php 2:7 but made himself nothing, taking the form of a servant, being born in the likeness of men.
Php 2:8 And being found in human form, he humbled himself by becoming obedient to the point of death, even death on a cross.
Php 2:9 Therefore God has highly exalted him and bestowed on him the name that is above every name,
Php 2:10 so that at the name of Jesus every knee should bow, in heaven and on earth and under the earth,
Php 2:11 and every tongue confess that Jesus Christ is Lord, to the glory of God the Father.
You are worth enough to have Jesus humble himself for you; so each one of us is worth a great deal indeed. Don't ask me to put a monetary value to your real worth, but one thing is for certain.... its more than Exxon can pay.
Email ThisBlogThis!Share to TwitterShare to FacebookShare to Pinterest
Newer Posts Older Posts Home
Subscribe to: Posts (Atom)