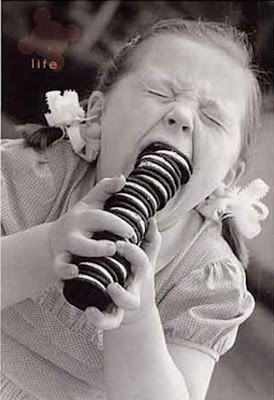 Somebody like Oreo cookies!  All she needs now is the milk!  Have you ever felt the way she does about something?  It really doesn't have to be food; it could be baseball or knitting or reading or perhaps the love of your life.  You just couldn't spend enough time, money and effort in getting your heart's desire.  But what if you had messed up?  You dropped the ball in the outfield or hurt your love so badly that you don't even speak any more?  Suppose you had a second chance to make things right?  What would you do?  Here is what the Corinthians did in response to Paul's rebuke in his first letter to them...
WEB: II Corinthians 7:11. For behold, this same thing, that you were made sorry in a godly way, what earnest care it worked in you. Yes, what defense, indignation, fear, longing, zeal, and vengeance! In everything you demonstrated yourselves to be pure in the matter.
Anybody can talk about changing their life; I would bet that there are more than a few of us who have already forgotten our "New Year's Resolutions"!!!  But the Corinthians changed their ways; they did something about how they lived and according to this passage they did it in a big way!!!  Reality is that if you really want something, you will do almost anything to get it; milk is optional!!!
Email ThisBlogThis!Share to TwitterShare to FacebookShare to Pinterest


Gen 44:1 He commanded the steward of his house, saying, "Fill the men's sacks with food, as much as they can carry, and put every man's money in his sack's mouth.
Gen 44:2 Put my cup, the silver cup, in the sack's mouth of the youngest, with his grain money." He did according to the word that Joseph had spoken.
Gen 44:3 As soon as the morning was light, the men were sent away, they and their donkeys.
Gen 44:4 When they had gone out of the city, and were not yet far off, Joseph said to his steward, "Up, follow after the men. When you overtake them, ask them, 'Why have you rewarded evil for good?
Gen 44:5 Isn't this that from which my lord drinks, and by which he indeed divines? You have done evil in so doing.' "
Gen 44:6 He overtook them, and he spoke these words to them.
Gen 44:7 They said to him, "Why does my lord speak such words as these? Far be it from your servants that they should do such a thing!
Gen 44:8 Behold, the money, which we found in our sacks' mouths, we brought again to you out of the land of Canaan. How then should we steal silver or gold out of your lord's house?
Gen 44:9 With whoever of your servants it be found, let him die, and we also will be my lord's bondservants."
Gen 44:10 He said, "Now also let it be according to your words: he with whom it is found will be my bondservant; and you will be blameless."
Gen 44:11 Then they hurried, and every man took his sack down to the ground, and every man opened his sack.
Gen 44:12 He searched, beginning with the eldest, and ending at the youngest. The cup was found in Benjamin's sack.
Gen 44:13 Then they tore their clothes, and every man loaded his donkey, and returned to the city.
Gen 44:14 Judah and his brothers came to Joseph's house, and he was still there. They fell on the ground before him.
Gen 44:15 Joseph said to them, "What deed is this that you have done? Don't you know that such a man as I can indeed divine?"
Gen 44:16 Judah said, "What will we tell my lord? What will we speak? Or how will we clear ourselves? God has found out the iniquity of your servants. Behold, we are my lord's bondservants, both we, and he also in whose hand the cup is found."
Gen 44:17 He said, "Far be it from me that I should do so. The man in whose hand the cup is found, he will be my bondservant; but as for you, go up in peace to your father."
Gen 44:18 Then Judah came near to him, and said, "Oh, my lord, please let your servant speak a word in my lord's ears, and don't let your anger burn against your servant; for you are even as Pharaoh.
Gen 44:19 My lord asked his servants, saying, 'Have you a father, or a brother?'
Gen 44:20 We said to my lord, 'We have a father, an old man, and a child of his old age, a little one; and his brother is dead, and he alone is left of his mother; and his father loves him.'
Gen 44:21 You said to your servants, 'Bring him down to me, that I may set my eyes on him.'
Gen 44:22 We said to my lord, 'The boy can't leave his father: for if he should leave his father, his father would die.'
Gen 44:23 You said to your servants, 'Unless your youngest brother comes down with you, you will see my face no more.'
Gen 44:24 It happened when we came up to your servant my father, we told him the words of my lord.
Gen 44:25 Our father said, 'Go again, buy us a little food.'
Gen 44:26 We said, 'We can't go down. If our youngest brother is with us, then we will go down: for we may not see the man's face, unless our youngest brother is with us.'
Gen 44:27 Your servant, my father, said to us, 'You know that my wife bore me two sons:
Gen 44:28 and the one went out from me, and I said, "Surely he is torn in pieces;" and I haven't seen him since.
Gen 44:29 If you take this one also from me, and harm happens to him, you will bring down my gray hairs with sorrow to Sheol.'
Gen 44:30 Now therefore when I come to your servant my father, and the boy is not with us; seeing that his life is bound up in the boy's life;
Gen 44:31 it will happen, when he sees that the boy is no more, that he will die. Your servants will bring down the gray hairs of your servant, our father, with sorrow to Sheol.
Gen 44:32 For your servant became collateral for the boy to my father, saying, 'If I don't bring him to you, then I will bear the blame to my father forever.'
Gen 44:33 Now therefore, please let your servant stay instead of the boy, a bondservant to my lord; and let the boy go up with his brothers.
Gen 44:34 For how will I go up to my father, if the boy isn't with me?--lest I see the evil that will come on my father."

http://executableoutlines.com/top/dbr2.htm
One of the best things you can do for yourself is to read your Bible daily.... Gary
Email ThisBlogThis!Share to TwitterShare to FacebookShare to Pinterest
Newer Posts Older Posts Home
Subscribe to: Posts (Atom)