And that is the rest of the story.... 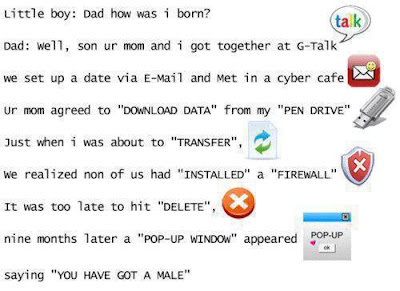 Sex; every one of us has had questions about it one time or another.  There are many ways of learning about it, some refined and others, well, crude to say the least.  "How did I get here"?(or the equivalent) is one question we all ask as we begin to comprehend the world around us.  I like the explanation above because it couches "an explanation" in modern technological terms that kids from the very tenderest of years can relate to.  But, what about Jesus? Here are a couple of different descriptions....


18 Now the birth of Jesus Christ was like this; for after his mother, Mary, was engaged to Joseph, before they came together, she was found pregnant by the Holy Spirit.  19 Joseph, her husband, being a righteous man, and not willing to make her a public example, intended to put her away secretly.  20 But when he thought about these things, behold, an angel of the Lord appeared to him in a dream, saying, “Joseph, son of David, don’t be afraid to take to yourself Mary, your wife, for that which is conceived in her is of the Holy Spirit.  21 She shall bring forth a son. You shall call his name Jesus, for it is he who shall save his people from their sins.”

22 Now all this has happened, that it might be fulfilled which was spoken by the Lord through the prophet, saying,

23 “Behold, the virgin shall be with child,
and shall bring forth a son.


They shall call his name Immanuel;”
which is, being interpreted, “God with us.”


24 Joseph arose from his sleep, and did as the angel of the Lord commanded him, and took his wife to himself;

24 Joseph arose from his sleep, and did as the angel of the Lord commanded him, and took his wife to himself;  25 and didn’t know her sexually until she had brought forth her firstborn son. He named him Jesus.

The Jews saw their lives in terms of 1. The patriarchs (Abraham to David) 2. The Captivity in Babylon and 3. The return from the promised land until the time of the Christ (see verse 17 above).  They needed to know the propriety of his lineage and the supernatural nature of his creation.  They didn't need to know the "how to", for that wouldn't be proper to discuss. The Gentiles however (see the Lucan passage above) just needed to know his line of descent.  Again, no lurid descriptions.  Why?  Because most of the people of ancient times were agrarian by occupation and learned the "how to's" at a very young age.  Anyway, how you got here is not as important as what you will do here.  As for Jesus, he did exactly what "The Christ" was supposed to do; provide a way for humans to deal with their sin problem.  And that, as they say, is the rest of the story....

Act 4:1 As they spoke to the people, the priests and the captain of the temple and the Sadducees came to them,
Act 4:2 being upset because they taught the people and proclaimed in Jesus the resurrection from the dead.
Act 4:3 They laid hands on them, and put them in custody until the next day, for it was now evening.
Act 4:4 But many of those who heard the word believed, and the number of the men came to be about five thousand.
Act 4:5 It happened in the morning, that their rulers, elders, and scribes were gathered together in Jerusalem.
Act 4:6 Annas the high priest was there, with Caiaphas, John, Alexander, and as many as were relatives of the high priest.
Act 4:7 When they had stood them in the middle of them, they inquired, "By what power, or in what name, have you done this?"
Act 4:8 Then Peter, filled with the Holy Spirit, said to them, "You rulers of the people, and elders of Israel,
Act 4:9 if we are examined today concerning a good deed done to a crippled man, by what means this man has been healed,
Act 4:10 be it known to you all, and to all the people of Israel, that in the name of Jesus Christ of Nazareth, whom you crucified, whom God raised from the dead, in him does this man stand here before you whole.
Act 4:11 He is 'the stone which was regarded as worthless by you, the builders, which has become the head of the corner.'
Act 4:12 There is salvation in none other, for neither is there any other name under heaven, that is given among men, by which we must be saved!"
Act 4:13 Now when they saw the boldness of Peter and John, and had perceived that they were unlearned and ignorant men, they marveled. They recognized that they had been with Jesus.
Act 4:14 Seeing the man who was healed standing with them, they could say nothing against it.
Act 4:15 But when they had commanded them to go aside out of the council, they conferred among themselves,
Act 4:16 saying, "What shall we do to these men? Because indeed a notable miracle has been done through them, as can be plainly seen by all who dwell in Jerusalem, and we can't deny it.
Act 4:17 But so that this spreads no further among the people, let's threaten them, that from now on they don't speak to anyone in this name."
Act 4:18 They called them, and commanded them not to speak at all nor teach in the name of Jesus.
Act 4:19 But Peter and John answered them, "Whether it is right in the sight of God to listen to you rather than to God, judge for yourselves,
Act 4:20 for we can't help telling the things which we saw and heard."
Act 4:21 When they had further threatened them, they let them go, finding no way to punish them, because of the people; for everyone glorified God for that which was done.
Act 4:22 For the man on whom this miracle of healing was performed was more than forty years old.
Act 4:23 Being let go, they came to their own company, and reported all that the chief priests and the elders had said to them.
Act 4:24 When they heard it, they lifted up their voice to God with one accord, and said, "O Lord, you are God, who made the heaven, the earth, the sea, and all that is in them;
Act 4:25 who by the mouth of your servant, David, said, 'Why do the nations rage, and the peoples plot a vain thing?
Act 4:26 The kings of the earth take a stand, and the rulers take council together, against the Lord, and against his Christ.'
Act 4:27 "For truly, in this city against your holy servant, Jesus, whom you anointed, both Herod and Pontius Pilate, with the Gentiles and the people of Israel, were gathered together
Act 4:28 to do whatever your hand and your council foreordained to happen.
Act 4:29 Now, Lord, look at their threats, and grant to your servants to speak your word with all boldness,
Act 4:30 while you stretch out your hand to heal; and that signs and wonders may be done through the name of your holy Servant Jesus."
Act 4:31 When they had prayed, the place was shaken where they were gathered together. They were all filled with the Holy Spirit, and they spoke the word of God with boldness.
Act 4:32 The multitude of those who believed were of one heart and soul. Not one of them claimed that anything of the things which he possessed was his own, but they had all things in common.
Act 4:33 With great power, the apostles gave their testimony of the resurrection of the Lord Jesus. Great grace was on them all.
Act 4:34 For neither was there among them any who lacked, for as many as were owners of lands or houses sold them, and brought the proceeds of the things that were sold,
Act 4:35 and laid them at the apostles' feet, and distribution was made to each, according as anyone had need.
Act 4:36 Joses, who by the apostles was surnamed Barnabas (which is, being interpreted, Son of Encouragement), a Levite, a man of Cyprus by race,
Act 4:37 having a field, sold it, and brought the money and laid it at the apostles' feet.