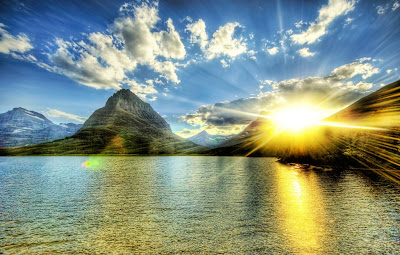 This picture has special meaning for me as I worked the overnight shift for several years. Occasionally, I would go out into the bright sunlight after a hard nights work only to be temporarily blinded by the sun. Insight is like that too, because sometimes you will work and work and then work some more on a problem to the point where you could scream with frustration. Then, unexpectedly, the answer comes to you.... just like that. It could be hours, days or longer and then suddenly you KNOW THE ANSWER. Paul's letter to the Ephesians must have made them feel like that and more.
Eph 3:1 For this cause I, Paul, am the prisoner of Christ Jesus on behalf of you Gentiles,
Eph 3:2 if it is so that you have heard of the administration of that grace of God which was given me toward you;
Eph 3:3 how that by revelation the mystery was made known to me, as I wrote before in few words,
Eph 3:4 by which, when you read, you can perceive my understanding in the mystery of Christ;
Eph 3:5 which in other generations was not made known to the children of men, as it has now been revealed to his holy apostles and prophets in the Spirit;
Eph 3:6 that the Gentiles are fellow heirs, and fellow members of the body, and fellow partakers of his promise in Christ Jesus through the Good News,
Eph 3:7 of which I was made a servant, according to the gift of that grace of God which was given me according to the working of his power.
Eph 3:8 To me, the very least of all saints, was this grace given, to preach to the Gentiles the unsearchable riches of Christ,
God has a way of working things out that is unfathomable to mere humans. Sometimes the only way I get a glimpse of understanding is to try to view my life over a few DECADES. Can you imagine a perspective from infinity? The reality is that God views everyone as important, NOT JUST THE JEWS! It took literally hundreds of years to bring the Gentiles into the picture, but God sees beyond time and space AND MADE IT SO! For those of us who have been "grafted in" to root of Judaism, it is a blessing beyond belief. The light of God shines on ALL OF HUMANITY, NOT JUST A FEW! Oh, yes and if you are working overnight right now, be sure to have a pair of sunglasses on when you leave work today, the sun shines very brightly indeed in Florida.
Email ThisBlogThis!Share to TwitterShare to FacebookShare to Pinterest
Newer Posts Older Posts Home
Subscribe to: Posts (Atom)