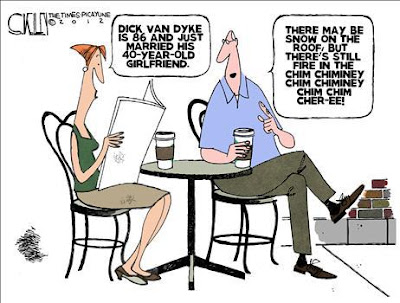 OK, this cute little cartoon is a LITTLE DATED; Dick is now 87.  I remember him best for the Dick Van Dyk show, but the reference in the picture is to his portrayal as chimney sweep in the late sixties movie "Mary Poppins".  If you remember him, then like me, you probably remember the energy he exhibited.  I am not one bit surprised that he is still active, because his enthusiasm for life and his humor are amazing.  Think your life has ended at 60 or 70?  His has not!!!  I saw him make an appearance on the Rachael Ray cooking show recently and he looked fantastic (although he is completely grey haired now).  When I saw him, I couldn't help but think of one of the most famous personages in the Old Testament, namely, Caleb.  Here are a few verses about him....

Numbers, Chapter 13
25 They returned from spying out the land at the end of forty days.  26 They went and came to Moses, and to Aaron, and to all the congregation of the children of Israel, to the wilderness of Paran, to Kadesh; and brought back word to them, and to all the congregation, and showed them the fruit of the land.  27 They told him, and said, “We came to the land where you sent us; and surely it flows with milk and honey; and this is its fruit.  28 However the people who dwell in the land are strong, and the cities are fortified and very large. Moreover, we saw the children of Anak there.  29 Amalek dwells in the land of the South: and the Hittite, and the Jebusite, and the Amorite, dwell in the hill country; and the Canaanite dwells by the sea, and along by the side of the Jordan.”  30 Caleb stilled the people before Moses, and said, “Let us go up at once, and possess it; for we are well able to overcome it.” 31 But the men who went up with him said, “We aren’t able to go up against the people; for they are stronger than we.”  32 They brought up an evil report of the land which they had spied out to the children of Israel, saying, “The land, through which we have gone to spy it out, is a land that eats up its inhabitants; and all the people who we saw in it are men of great stature.  33 There we saw the Nephilim, the sons of Anak, who come of the Nephilim: and we were in our own sight as grasshoppers, and so we were in their sight.”

Numbers, Chapter 14
30 surely you shall not come into the land, concerning which I swore that I would make you dwell therein, except Caleb the son of Jephunneh, and Joshua the son of Nun.

Joshua, Chapter 14
10 “Now, behold, Yahweh has kept me alive, as he spoke, these forty-five years, from the time that Yahweh spoke this word to Moses, while Israel walked in the wilderness. Now, behold, I am eighty-five years old, today.  11 As yet I am as strong today as I was in the day that Moses sent me: as my strength was then, even so is my strength now for war, to go out and to come in.  12 Now therefore give me this hill country, of which Yahweh spoke in that day; for you heard in that day how the Anakim were there, and great and fortified cities. It may be that Yahweh will be with me, and I shall drive them out, as Yahweh spoke.”  13 Joshua blessed him; and he gave Hebron to Caleb the son of Jephunneh for an inheritance.  14 Therefore Hebron became the inheritance of Caleb the son of Jephunneh the Kenizzite to this day; because he wholly followed Yahweh, the God of Israel.

How many people came out of Egypt to go to the promised land?  Good question, as I have seen estimates as low as 200,000 and as high as 5,000,000.  However many came out of Egypt, only two from that original group actually went into the promised land, namely, Joshua and Caleb.  Joshua was the leader and Caleb a follower, but what a follower!!!!  Read the passage from Joshua, chapter 14 again.  Here was a man who was 85 years young and still had a "gung ho" attitude!!!!  His love for God was expressed in his enthusiasm and provides us with a heroic figure to look up to.  He is an inspiration to me and should be to us all, not only for his abilities and attitude, but most of all for the love of God that motivated him!!!  May God bless all who love him with a life like this wonderful man!!!!!!
Email ThisBlogThis!Share to TwitterShare to FacebookShare to Pinterest

"THE SECOND EPISTLE TO THE CORINTHIANS" Chapter Eight by Mark Copeland