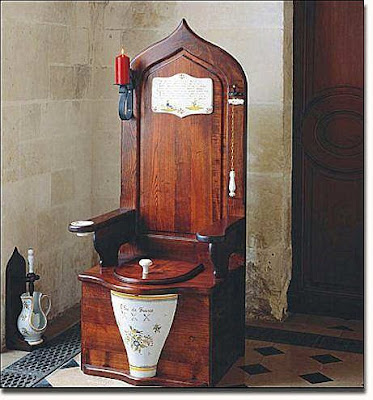 I grew up on a farm where we didn't have an inside toilet until I was a teen. So, the term outhouse has a lot of meaning to me, but the term chamber pot has the most meaning because it was my job to empty my parents' one each morning. YUK, YUK and double YUK! Then we actually installed a real flush toilet in the house and my potting days were ended; Hooray!!!!!!!!!! But one thing has always confused and perplexed me: Why is a toilet called a throne? However, this royal throne does at least help me visualize it. There is a place in the Bible that does refer to someone using a toilet and because that someone was a king, well, I suppose it was royal. The story comes from the book of Judges:
Jdg 3:12 The children of Israel again did that which was evil in the sight of Yahweh: and Yahweh strengthened Eglon the king of Moab against Israel, because they had done that which was evil in the sight of Yahweh.
Jdg 3:13 He gathered to him the children of Ammon and Amalek; and he went and struck Israel, and they possessed the city of palm trees.
Jdg 3:14 The children of Israel served Eglon the king of Moab eighteen years.
Jdg 3:15 But when the children of Israel cried to Yahweh, Yahweh raised them up a savior, Ehud the son of Gera, the Benjamite, a man left-handed. The children of Israel sent tribute by him to Eglon the king of Moab.
Jdg 3:16 Ehud made him a sword which had two edges, a cubit in length; and he girded it under his clothing on his right thigh.
Jdg 3:17 He offered the tribute to Eglon king of Moab: now Eglon was a very fat man.
Jdg 3:18 When he had made an end of offering the tribute, he sent away the people who bore the tribute.
Jdg 3:19 But he himself turned back from the quarries that were by Gilgal, and said, I have a secret errand to you, king. He said, Keep silence. All who stood by him went out from him.
Jdg 3:20 Ehud came to him; and he was sitting by himself alone in the cool upper room. Ehud said, I have a message from God to you. He arose out of his seat.
Jdg 3:21 Ehud put forth his left hand, and took the sword from his right thigh, and thrust it into his body:
Jdg 3:22 and the haft also went in after the blade; and the fat closed on the blade, for he didn't draw the sword out of his body; and it came out behind.
Jdg 3:23 Then Ehud went forth into the porch, and shut the doors of the upper room on him, and locked them.
Jdg 3:24 Now when he was gone out, his servants came; and they saw, and behold, the doors of the upper room were locked; and they said, Surely he is covering his feet in the upper chamber.
Jdg 3:25 They waited until they were ashamed; and behold, he didn't open the doors of the upper room: therefore they took the key, and opened them, and behold, their lord was fallen down dead on the earth.
Jdg 3:26 Ehud escaped while they waited, and passed beyond the quarries, and escaped to Seirah.
Jdg 3:27 It happened, when he had come, that he blew a trumpet in the hill country of Ephraim; and the children of Israel went down with him from the hill country, and he before them.
Jdg 3:28 He said to them, Follow after me; for Yahweh has delivered your enemies the Moabites into your hand. They went down after him, and took the fords of the Jordan against the Moabites, and didn't allow a man to pass over.
Jdg 3:29 They struck of Moab at that time about ten thousand men, every lusty man, and every man of valor; and there escaped not a man.
Jdg 3:30 So Moab was subdued that day under the hand of Israel. The land had rest eighty years. World English Bible
Covering ones feet is another way of saying a person was using the toilet. I can't even begin to imagine a less royal place to meet ones end. But, so it was, Eglon died on the pot. I wonder if God has a subliminal message in there somewhere? No matter where (or how) it started, Israel's cries for deliverance were heard and they had rest for eighty years. Just goes to show you-- God works in mysterious ways. But I wonder.... if the deliverance that gave the land rest eighty years happened in the room where Eglon was "covering his feet".... does that make it a restroom?
Email ThisBlogThis!Share to TwitterShare to FacebookShare to Pinterest
Newer Posts Older Posts Home
Subscribe to: Posts (Atom)