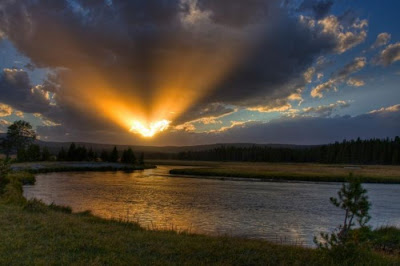 Crepuscular rays; new term of late (for me), but just another way of saying the sun is shining in a very special way. These rays form a V, which is very significant for me as a V stands for Victory.
I guess this started a long time ago, from the old World War II series "Victory at Sea", but it has become more than just something relating to war; it is a victory over sin. Want to know how to win? The answer lies in how we respond to the Word of God. Consider the parable of the Tares (darnel).

Matt 13:36-43 (WEB)
36) Then Jesus sent the multitudes away, and went into the house. His disciples came to him, saying, “Explain to us the parable of the darnel weeds of the field.”
37) He answered them, “He who sows the good seed is the Son of Man,
38) the field is the world; and the good seed, these are the children of the Kingdom; and the darnel weeds are the children of the evil one.
39) The enemy who sowed them is the devil. The harvest is the end of the age, and the reapers are angels.
40) As therefore the darnel weeds are gathered up and burned with fire; so will it be at the end of this age.
41) The Son of Man will send out his angels, and they will gather out of his Kingdom all things that cause stumbling, and those who do iniquity,
42) and will cast them into the furnace of fire. There will be weeping and the gnashing of teeth.
43) Then the righteous will shine forth like the sun in the Kingdom of their Father. He who has ears to hear, let him hear.

The Bible is more than just a book, it is the heart of God reaching out to that of his created beings. Sometimes its not easy for us to understand exactly what HE is trying to say, but over time we will get it, if we keep on searching. The disciples had a problem understanding Jesus, but thankfully they kept on asking and asking until after a time, they began to get it. This understanding of God changes us. The more we get it, the more we will shine because the truth of heaven makes those who truly follow God radiant. By the way, "V" can also stand for virtuous! Humm, virtuosity can be a VICTORY; now, there is a thought to hold on to.
Email ThisBlogThis!Share to TwitterShare to FacebookShare to Pinterest
Newer Posts Older Posts Home
Subscribe to: Posts (Atom)