The inside eventually BECOMES the outside 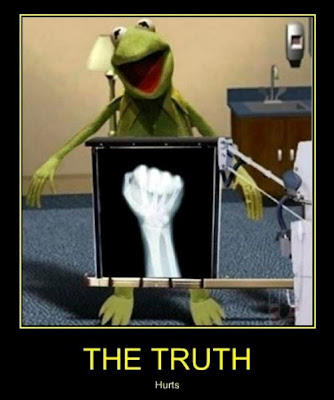 How true this is!!!  If we believe something that is untrue, it is natural for us to want to hold to what we believe, regardless....  Furthermore, we really don't LIKE someone pointing out our error.  Facing reality can be painful and can HURT!!!  But, we know from experience that sometimes HURT is good for you.  Say, for example, you have an infected cut and a puss sack forms; you need to open it up and put some sort of medicine in the wound or you may be in real trouble.  It hurts to open the wound and if you put salt into it, it hurts MORE.  But, you have done something about it and that is the POINT!!!  Now, before you actually did this, you may have noticed it yourself, or perhaps somebody pointed it out to you, but the important thing is that you realized that there was a problem and that the consequences of NOT DOING SOMETHING was unacceptable.  So, I thought of one of the most unique books of the Bible, that of Paul's letter to the Romans and his GOOD NEWS AND HIS BAD NEWS....

Romans, Chapter 1
13 Now I don’t desire to have you unaware, brothers, that I often planned to come to you, and was hindered so far, that I might have some fruit among you also, even as among the rest of the Gentiles.  14 I am debtor both to Greeks and to foreigners, both to the wise and to the foolish.  15 So, as much as is in me, I am eager to preach the Good News to you also who are in Rome.  16 For I am not ashamed of the Good News of Christ, for it is the power of God for salvation for everyone who believes; for the Jew first, and also for the Greek.  17 For in it is revealed God’s righteousness from faith to faith. As it is written, “But the righteous shall live by faith.”  18 For the wrath of God is revealed from heaven against all ungodliness and unrighteousness of men, who suppress the truth in unrighteousness,  19 because that which is known of God is revealed in them, for God revealed it to them.  20 For the invisible things of him since the creation of the world are clearly seen, being perceived through the things that are made, even his everlasting power and divinity; that they may be without excuse.  21 Because, knowing God, they didn’t glorify him as God, neither gave thanks, but became vain in their reasoning, and their senseless heart was darkened.  22 Professing themselves to be wise, they became fools,  23 and traded the glory of the incorruptible God for the likeness of an image of corruptible man, and of birds, and four-footed animals, and creeping things.  24 Therefore God also gave them up in the lusts of their hearts to uncleanness, that their bodies should be dishonored among themselves,  25 who exchanged the truth of God for a lie, and worshiped and served the creature rather than the Creator, who is blessed forever. Amen.  26 For this reason, God gave them up to vile passions. For their women changed the natural function into that which is against nature.  27 Likewise also the men, leaving the natural function of the woman, burned in their lust toward one another, men doing what is inappropriate with men, and receiving in themselves the due penalty of their error.  28 Even as they refused to have God in their knowledge, God gave them up to a reprobate mind, to do those things which are not fitting;  29 being filled with all unrighteousness, sexual immorality, wickedness, covetousness, malice; full of envy, murder, strife, deceit, evil habits, secret slanderers, 30 backbiters, hateful to God, insolent, haughty, boastful, inventors of evil things, disobedient to parents, 31 without understanding, covenant breakers, without natural affection, unforgiving, unmerciful;  32 who, knowing the ordinance of God, that those who practice such things are worthy of death, not only do the same, but also approve of those who practice them.
The GOOD NEWS was the Gospel and its saving power was for everyone, the BAD NEWS was SIN!!!!  People don't like to think about sin much, because that involves something very personal and makes them think about WHO THEY REALLY ARE, you know, on the inside, where nobody can see.  That's where God comes in; HE has standards and requires you live you life in a certain way.  You know HIM, you have seen his creation and KNOW that neither you or anyone else you know could have possibly made it.  But some people don't like the thought of acknowledging a power greater than themselves and close their minds to even the IDEA of God.  The longer they do this, the farther they distance themselves from God's truth and become more and more and more selfish and sinful (like the last few verses of the chapter).  That is the story of this chapter and a message for us all.  Now, an x-ray can't reveal the status of your mind, but the word of God can.  If you measure yourself by yourself you will get an answer that will please yourself.  BUT, if you consider how GOD looks at you, then there is hope because that realization may just cause you to change both your thinking and your life.  And that's the point, isn't it?  Take a long look at yourself; if you don't like what you see... do something about it!!!  Hint: opening your Bible and reading is a good place to begin...

"ACTS OF THE APOSTLES" Chapter Twenty-Six by Mark Copeland