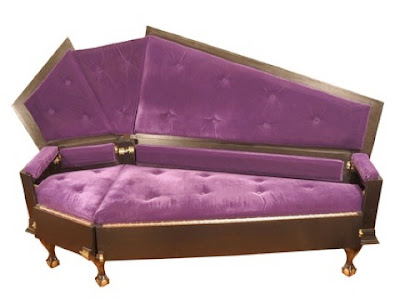 I think its a sofa, but it could be single bed. Who does it belong to? In a word... Abby on N.C.I.S.. You know her; the Gothic analytical chemist, who is part innocent, part genius, part weirdo. And Oh, yes, fully intriguing. She is the sort of character you just can't forget; someone whose every action seems etched on your brain. For me, John the Baptist seems just like her, thoroughly unforgettable.
Matt 3:1-12
3 In those days, John the Baptizer came, preaching in the wilderness of Judea, saying,2 "Repent, for the Kingdom of Heaven is at hand!"3 For this is he who was spoken of by Isaiah the prophet, saying, "The voice of one crying in the wilderness, Make ready the way of the Lord, Make his paths straight."4 Now John himself wore clothing made of camel's hair, with a leather belt around his waist. His food was locusts and wild honey.5 Then people from Jerusalem, all of Judea, and all the region around the Jordan went out to him.6 They were baptized by him in the Jordan, confessing their sins.7 But when he saw many of the Pharisees and Sadducees coming for his baptism, he said to them, "You offspring of vipers, who warned you to flee from the wrath to come?8 Therefore bring forth fruit worthy of repentance!9 Don't think to yourselves, 'We have Abraham for our father,' for I tell you that God is able to raise up children to Abraham from these stones.10 "Even now the axe lies at the root of the trees. Therefore, every tree that doesn't bring forth good fruit is cut down, and cast into the fire.11 I indeed baptize you in water for repentance, but he who comes after me is mightier than I, whose shoes I am not worthy to carry. He will baptize you in the Holy Spirit.12 His winnowing fork is in his hand, and he will thoroughly cleanse his threshing floor. He will gather his wheat into the barn, but the chaff he will burn up with unquenchable fire. WEB
He didn't mince words, he spoke directly and his overall appearance would have been something you never would forget. I WOULD LISTEN WHEN HE SPOKE; HE COULD NOT BE IGNORED. I wish he was here today because America needs someone as direct as him. Repent means repent; change is needed today. Not change for the sake of change, but change with a view to reform. Today, like in the time of the Baptist, there are many, many people who are going through the motions of religion, but the heart felt substance of it is far, far from them. Instead of cash for clunkers, we need soft hearts instead of insensitive ones. Jesus will be back soon and judgment will be decisive. Listen, and remember; there will be a test.
Email ThisBlogThis!Share to TwitterShare to FacebookShare to Pinterest
Newer Posts Older Posts Home
Subscribe to: Posts (Atom)