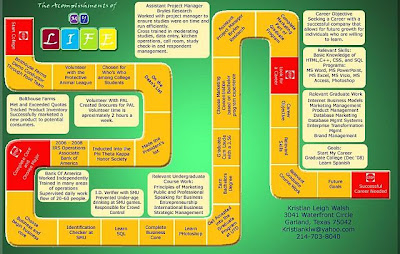 No, this is not a game!!! This is a resume!!! Very unusual, but sure to be noticed. When I saw this, I thought of my own life and what would be on my own version. All that we do is observed and noted by the creator of the entire universe; nothing is hidden to him. Think that is not important; well, consider this passage from the book of revelation.
Rev 20:11-15
11 I saw a great white throne, and him who sat on it, from whose face the earth and the heaven fled away. There was found no place for them.
12 I saw the dead, the great and the small, standing before the throne, and they opened books. Another book was opened, which is the book of life. The dead were judged out of the things which were written in the books, according to their works.
13 The sea gave up the dead who were in it. Death and Hades gave up the dead who were in them. They were judged, each one according to his works.
14 Death and Hades were thrown into the lake of fire. This is the second death, the lake of fire.
15 If anyone was not found written in the book of life, he was cast into the lake of fire. WEB
Payday, someday. Each block of our own resume builds a pathway to our own eternal destiny. In a sense we decide whether we win or lose in this life AND THE NEXT!!! So, each day make a decision to listen to God and make the right choices, in order that your own resume is a pathway to the pearly gates.
Email ThisBlogThis!Share to TwitterShare to FacebookShare to Pinterest
Newer Posts Older Posts Home
Subscribe to: Posts (Atom)