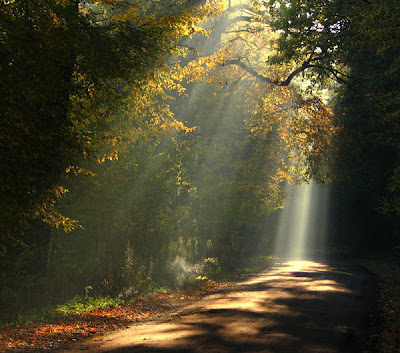 I miss upstate New York; the trees are so different in Florida. So, when I saw this picture I indulged in a bit of nostalgia. As I continued to look at it, I realized that we are all on the road through life and where we go and what we do is determined at least in part by the amount of light we let into our lives. Light (from God) is hampered mostly by ones heart, but also by the life we live. Read on to see how Jesus dealt with the problem.
Matthew 13:1-23 Complete Apostles' Bible
(1) On the same day Jesus went out of the house and sat beside the sea.
(2) And great crowds were gathered together to Him, so that He got into the boat and sat; and the crowd stood on the shore.
(3) And He spoke to them many things in parables, saying: "Behold, a sower went out to sow.
(4) And as he sowed, some seed fell alongside the road; and the birds came and devoured them.
(5) But others fell on the stony ground, where it did not have much earth; and immediately it sprang up, because it had no depth of earth.
(6) But when the sun rose, it was scorched, and because it had no root, it withered away.
(7) But others fell among thorns, and the thorns sprang up and choked them out.
(8) But others fell on good ground and it was yielding fruit: some a hundredfold, some sixty, some thirty.
(9) He who has ears to hear, let him hear!"
(10) And the disciples approached and said to Him, "Why do You speak to them in parables?"
(11) He answered and said to them, "To you it has been given to know the mysteries of the kingdom of heaven, but to them it has not been given.
(12) For whoever has, to him more shall be given, and he shall be in abundance; but whoever does not have, even what he has shall be taken away from him.
(13) Therefore I speak to them in parables, because seeing they do not see, and hearing they do not hear, nor do they understand.
(14) And in them is fulfilled the prophecy of Isaiah, which says: 'Hearing you shall hear and by no means understand, and seeing you shall see and by no means perceive.
(15) For the heart of this people has become dull, and their ears are hard of hearing, and their eyes have closed, lest they should see with their eyes, and hear with their ears, lest they should understand with their hearts and turn back, that I should heal them.'
(16) "But blessed are your eyes because they see, and your ears, because they hear.
(17) For assuredly I say to you, that many prophets and righteous men desired to see what you see, and they did not see, and to hear what you hear, and they did not hear."
(18) "Therefore hear the parable of the sower:
(19) When anyone hears the word of the kingdom, and does not understand, then the evil one comes and snatches away what was sown in his heart. This is the seed being sown beside the road.
(20) But the seed sown on stony ground, is he who hears the word and immediately receives it with joy;
(21) yet he has no root in himself, but is short-lived. For when tribulation or persecution comes because of the word, immediately he stumbles.
(22) But the seed sown in the thorns is he who hears the word, and the anxiety of this age, and the deceitfulness of riches chokes out the word, and it becomes fruitless.
(23) But the seed sown on the good ground is he who hears the word and understands it, who indeed bears fruit and produces: some a hundredfold, some sixty, some thirty."
The light I am referring to is the word of God and although you might be the most persuasive speaker and present what God has said in a magnificent manner, if the hearer isn't ready or capable of really hearing, then they just don't get it. Why, because they focus on other things and can't understand, or they don't wish to internalize it or they are preoccupied by daily living. Any and / or all of these things create an overgrowth of foliage which reduces or blocks what God has said. One last thing; you really have to want to hear; what filters through into your life from God is up to you and so is what you do with it. Jesus just tells it like it is and gives you a choice, its up to you! Anybody have a tree trimmer?
Email ThisBlogThis!Share to TwitterShare to FacebookShare to Pinterest 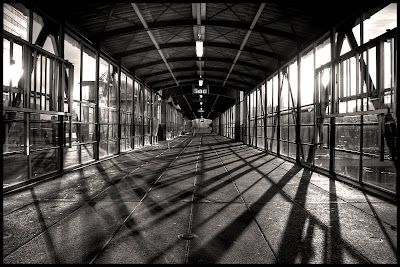 Its amazing to me how few people have seen black and white TV. I grew up with it and still enjoy watching some of the older shows like "I love Lucy" or "Gunsmoke" or "Mayberry RFD". Don't get me wrong, I enjoy my color TV a lot, but somehow black and white "feels" right. Its like trying to read a book on a computer versus a book that you can actually hold. Honestly, I love electronic equipment but sometimes the simplest way of doing things is the best. That's what they make pencils for, remember. So, when I saw this simple black and white picture I enjoyed it because of the way the light forms patterns with the walkway beams. God has a way of doing the something similar; of weaving a web through time using people to accomplish his chosen task.
Matthew 1:1-21 Complete Apostles' Bible
(1) The book of the genealogy of Jesus Christ, the Son of David, the Son of Abraham:
(2) Abraham begot Isaac, Isaac begot Jacob, and Jacob begot Judah and his brothers.
(3) Judah begot Perez and Zerah by Tamar, Perez begot Hezron, and Hezron begot Ram.
(4) Ram begot Amminadab, Amminadab begot Nahshon, and Nahshon begot Salmon.
(5) Salmon begot Boaz by Rahab, Boaz begot Obed by Ruth, Obed begot Jesse,
(6) and Jesse begot David the king. David the king begot Solomon by her who had been the wife of Uriah.
(7) Solomon begot Rehoboam, Rehoboam begot Abijah, and Abijah begot Asa.
(8) Asa begot Jehoshaphat, Jehoshaphat begot Joram, and Joram begot Uzziah.
(9) Uzziah begot Jotham, Jotham begot Ahaz, and Ahaz begot Hezekiah.
(10) Hezekiah begot Manasseh, Manasseh begot Amon, and Amon begot Josiah.
(11) Josiah begot Jeconiah and his brothers at the time of the captivity in Babylon.
(12) And after the captivity in Babylon, Jeconiah begot Shealtiel, and Shealtiel begot Zerubbabel.
(13) Zerubbabel begot Abiud, Abiud begot Eliakim, and Eliakim begot Azor.
(14) Azor begot Zadok, Zadok begot Achim, and Achim begot Eliud.
(15) Eliud begot Eleazar, Eleazar begot Matthan, and Matthan begot Jacob.
(16) And Jacob begot Joseph the husband of Mary, of whom was born Jesus who is called Christ.
(17) So all the generations from Abraham till David were fourteen generations, from David until the captivity in Babylon were fourteen generations, and from the captivity in Babylon until the Christ were fourteen generations.
(18) Now the birth of Jesus Christ was like this: After His mother Mary had been betrothed to Joseph, before they came together, she was found pregnant by the Holy Spirit.
(19) Then Joseph her husband, being righteous and not wanting to make her a public example, purposed to put her away secretly.
(20) But while he was thinking about these things, behold, an angel of the Lord appeared to him in a dream, saying, "Joseph, son of David, do not fear to take unto you Mary your wife, for that which is begotten in her is of the Holy Spirit.
(21) And she shall bring forth a Son, and you shall call His name JESUS, for He shall save His people from their sins."
Look at all the people God used! All these led to ONE PERSON at the right time in the right place with the right stuff. God took his time and provided a way out of sin. The above picture is beautiful and the pattern interesting, but the light that God uses has heavenly inspiration and beauty beyond description. Don't see the light, well, it was in the faces of all those people and eventually Jesus himself. As beautiful as the picture is, I like God's work better; people really do matter more than shadows!
Email ThisBlogThis!Share to TwitterShare to FacebookShare to Pinterest
Newer Posts Older Posts Home
Subscribe to: Posts (Atom)