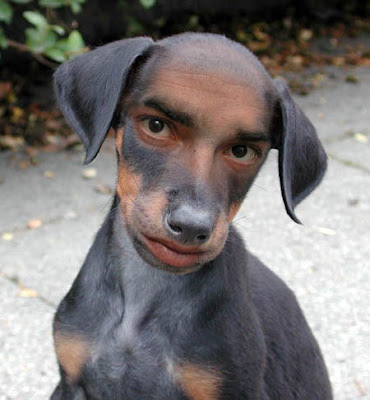 Relax, this picture isn't real; not yet anyway. Mistakes can be very dangerous, especially when it comes to programming DNA! In Florida we have "love bugs"; genetically engineered little bugs, but they have a nasty little side effect... if you don't clean them off quickly enough they can destroy the paint on your auto. OK, so they are a minor irritant, but what if the scientists try fiddling with human DNA; can a "master race" be far behind? With these things in mind consider just two verses from the book of Genesis:
Gen 1:26 And God said, Let us make man in our image, after our likeness: and let them have dominion over the fish of the sea, and over the fowl of the air, and over the cattle, and over all the earth, and over every creeping animal that creepeth upon the earth.
Gen 1:27 So God created man in his own image, in the image of God created he him; male and female created he them.
The Webster Bible
If God is perfect and we are made in the image and likeness of perfection, then why would we want to change it? However, right now, there is probably someone trying to change God's design into something better. I am just afraid of an occasional "whoops" which would force us into renaming the picture of Fido into something else... maybe Fred? The world would really be going to the dogs then!
Email ThisBlogThis!Share to TwitterShare to FacebookShare to Pinterest
Newer Posts Older Posts Home
Subscribe to: Posts (Atom)