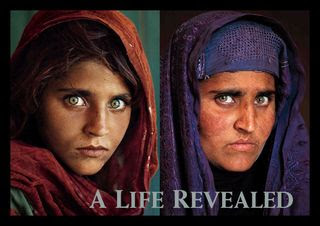 I was reading one of my favorite blogs today ("Right Truth") and I saw this picture. The picture on the left should look a little familiar to us, as she was on the cover of "The National Geographic" magazine in 1985. Her name is Sharbat Gula (which very few people knew until recently) and she is an Afgan refugee. Life has changed her and only her eyes seem to remain unchanged. She obviously has had a hard life, but what really bothered me when I read the article is that she was described as being "worn out" at age 30. Question: What do we do with someone who is worn out? Do they have any value once they are worn out, or are they worth less. Here is a passage from the book of Leviticus that should make us all think.

Admittedly, this is a problem passage for me! It seems to say some things I don't like; for instance, because I am now 60 I am worth less than I was at 20. Also, I really do not like the valuation for women and children as well. What it really refers to is the ability of the people mentioned to be able to keep their vows. That is the only way it makes sense to me. I have lived quite a while and would like to think I know MORE than I did at 20 (and am therefore more valuable). Consider this passage from the New Testament.


We all have value, all souls are the same and in Christ Jesus and all are the sons of God. I thought of the following poem and even though it is somewhat long I still wanted to include it!


The Touch of the Master's Hand
It was battered and scarred, And the auctioneer thought it hardly worth his while To waste his time on the old violin, but he held it up with a smile.
"What am I bid, good people", he cried, "Who starts the bidding for me?" "One dollar, one dollar, Do I hear two?" "Two dollars, who makes it three?" "Three dollars once, three dollars twice, going for three,"
But, No, From the room far back a gray bearded man Came forward and picked up the bow, Then wiping the dust from the old violin And tightening up the strings, He played a melody, pure and sweet As sweet as the angel sings.
The music ceased and the auctioneer With a voice that was quiet and low, Said "What now am I bid for this old violin?" As he held it aloft with its' bow.
"One thousand, one thousand, Do I hear two?" "Two thousand, Who makes it three?" "Three thousand once, three thousand twice, Going and gone", said he.
The audience cheered, But some of them cried, "We just don't understand." "What changed its' worth?" Swift came the reply. "The Touch of the Masters Hand."
And many a man with life out of tune All battered with bourbon and gin Is auctioned cheap to a thoughtless crowd Much like that old violin
A mess of pottage, a glass of wine, A game and he travels on. He is going once, he is going twice, He is going and almost gone.
But the Master comes, And the foolish crowd never can quite understand, The worth of a soul and the change that is wrought By the Touch of the Masters' Hand.
Myra Brooks Welch


Every day lived with God is a blessing, but the body will wear out and in the eyes of men we may not be worth much, but "IN CHRIST" we are all equal and worth something; I know this because of the value placed on us by Jesus (his life's blood). Don't value by appearance, but rather by character, for it is the reflection of the soul. Remember, God does not look at the outward appearance, but at the human heart (the character).
Email ThisBlogThis!Share to TwitterShare to FacebookShare to Pinterest

That is really groovy! 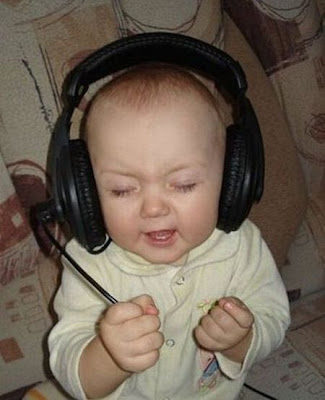 This little guy is sure enjoying himself! Music has a way of bringing happiness. But what if you have every reason to despair and you still can sing? Here is a passage to show that it can be done.


Acts 16:19-26 Complete Apostles' Bible
(19) And when her masters saw that the hope of their profit was gone, they took Paul and Silas, and dragged them to the marketplace to the rulers.
(20) And bringing them to the magistrates they said, "These men, being Jews, are agitating our city;
(21) and they are proclaiming customs which are not lawful for us to receive or to do, since we are Romans."
(22) And the crowd rose up together against them; and the magistrates tore their clothes and ordered men to beat them with rods.
(23) And when they laid many strokes on them, they cast them into prison, commanding the prison keeper to keep them securely;
(24) who, having received such a command, cast them into the inner prison and fastened their feet in the stocks.
(25) Now about midnight Paul and Silas were praying and singing hymns to God, and the prisoners were listening to them.
(26) And suddenly there was a great earthquake, so that the foundations of the prison were shaken; and immediately all the doors were opened and all the bonds were loosed.


There are different types of music; no, I am not talking about the difference between Rock and Classical or Reggae and Ragtime. There are different objects within music; a rhythmic or melody with no object, a song about interpersonal relationships (love songs), one about events (such as the Titanic song), or one about feelings (such as the 34th street song by Simon and Garfunkle). However, these types have one thing in common: "I". When the object is heavenly it is a different matter; the relationship between God and His creation changes things. The gap between the Spiritual and the physical is breached and it is as if heaven comes to Earth and God is right near by. This closeness to God brings joy and peace such as only the creator can supply. "I" centered music is focused on oneself and therefore flawed, but singing that has God as its object reaches for true perfection. The music or singing doesn't have to be spectacular or even well done, it just communes the heart of man with that of God and that WILL CHANGE THINGS! Oh, it might not cause an earthquake, but you will change because a little bit of the perfection of God will rub off on you and that is really groovy!
Email ThisBlogThis!Share to TwitterShare to FacebookShare to Pinterest
Newer Posts Older Posts Home
Subscribe to: Posts (Atom)