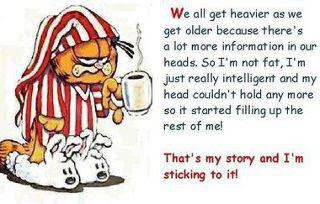 Interesting story; never heard that one before!!!  Garfield has quite a vivid imagination, but we all know the truth; either you have a medical condition that causes you to gain weight or face it, you just eat too much.  Sometimes truth is a hard thing to come to grips with and often people will do anything, say anything to avoid it.  Not only is this true today, but it was 2000 years ago when Jesus walked this Earth.  Here is a prime example from the book of Matthew...
WEB: Matthew Chapter 12

[22] Then one possessed by a demon, blind and mute, was brought to him and he healed him, so that the blind and mute man both spoke and saw. [23] All the multitudes were amazed, and said, “Can this be the son of David?” [24] But when the Pharisees heard it, they said, “This man does not cast out demons, except by Beelzebul, the prince of the demons.”

[25] Knowing their thoughts, Jesus said to them, "“Every kingdom divided against itself is brought to desolation, and every city or house divided against itself will not stand. [26] If Satan casts out Satan, he is divided against himself. How then will his kingdom stand? [27] If I by Beelzebul cast out demons, by whom do your children cast them out? Therefore they will be your judges. [28] But if I by the Spirit of God cast out demons, then the Kingdom of God has come upon you. [29] Or how can one enter into the house of the strong man, and plunder his goods, unless he first bind the strong man? Then he will plunder his house.

[33] “Either make the tree good, and its fruit good, or make the tree corrupt, and its fruit corrupt; for the tree is known by its fruit. [34] You offspring of vipers, how can you, being evil, speak good things? For out of the abundance of the heart, the mouth speaks. [35] The good man out of his good treasure brings out good things, and the evil man out of his evil treasure brings out evil things. [36] I tell you that every idle word that men speak, they will give account of it in the day of judgment. [37] For by your words you will be justified, and by your words you will be condemned.”"

Jesus did something the Pharisees could not accept; he healed someone.  So, because Jesus' power didn't fit in with their concept of what should be done (and they considered their understanding to be correct because THEY knew the Scriptures) they reasoned it must be of evil.  Jesus tore their reasoning apart and showed them the TRUTH.  They were committing an ETERNAL SIN!!!  Just goes to show you... no matter how smart you think are; God is always right!  Best thing to do is to just accept the TRUTH for what it is and go from there.  "Reasoning" from wrong motives is destructive; both Garfield and the Pharisees needed to learn that little lesson.  Still, the picture is cute... I especially like the slippers; they remind me of the bunny costume in "The Christmas Story".  Garfield being Garfield, I doubt if he gets beat up by his classmates, though.
Email ThisBlogThis!Share to TwitterShare to FacebookShare to Pinterest


1Pe 4:1 Forasmuch then as Christ suffered for us in the flesh, arm yourselves also with the same mind; for he who has suffered in the flesh has ceased from sin;
1Pe 4:2 that you no longer should live the rest of your time in the flesh for the lusts of men, but for the will of God.
1Pe 4:3 For we have spent enough of our past time doing the desire of the Gentiles, and having walked in lewdness, lusts, drunken binges, orgies, carousings, and abominable idolatries.
1Pe 4:4 They think it is strange that you don't run with them into the same excess of riot, blaspheming:
1Pe 4:5 who will give account to him who is ready to judge the living and the dead.
1Pe 4:6 For to this end the Good News was preached even to the dead, that they might be judged indeed as men in the flesh, but live as to God in the spirit.
1Pe 4:7 But the end of all things is near. Therefore be of sound mind, self-controlled, and sober in prayer.
1Pe 4:8 And above all things be earnest in your love among yourselves, for love covers a multitude of sins.
1Pe 4:9 Be hospitable to one another without grumbling.
1Pe 4:10 As each has received a gift, employ it in serving one another, as good managers of the grace of God in its various forms.
1Pe 4:11 If anyone speaks, let it be as it were the very words of God. If anyone serves, let it be as of the strength which God supplies, that in all things God may be glorified through Jesus Christ, to whom belong the glory and the dominion forever and ever. Amen.
1Pe 4:12 Beloved, don't be astonished at the fiery trial which has come upon you, to test you, as though a strange thing happened to you.
1Pe 4:13 But because you are partakers of Christ's sufferings, rejoice; that at the revelation of his glory you also may rejoice with exceeding joy.
1Pe 4:14 If you are insulted for the name of Christ, you are blessed; because the Spirit of glory and of God rests on you. On their part he is blasphemed, but on your part he is glorified.
1Pe 4:15 For let none of you suffer as a murderer, or a thief, or an evil doer, or a meddler in other men's matters.
1Pe 4:16 But if one of you suffers for being a Christian, let him not be ashamed; but let him glorify God in this matter.
1Pe 4:17 For the time has come for judgment to begin with the household of God. If it begins first with us, what will happen to those who don't obey the Good News of God?
1Pe 4:18 "If it is hard for the righteous to be saved, what will happen to the ungodly and the sinner?"
1Pe 4:19 Therefore let them also who suffer according to the will of God in doing good entrust their souls to him, as to a faithful Creator.
Email ThisBlogThis!Share to TwitterShare to FacebookShare to Pinterest

I have always set the Lord before me by Mark Copeland