The color of life 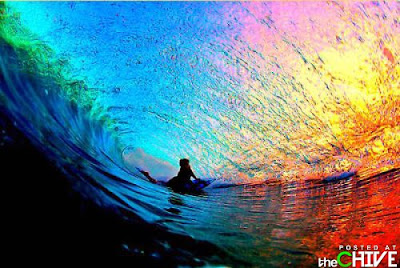 I know that this is a picture, but it looks like a painting to me.  Its as if someone painted everything above the waterline with little dots and the result was both picture and painting.  In reality I understand that the spray from the wave has distorted the image, but the impression remains with me still.  One thing that the picture practically shouts is life.  Its hard to imagine that the person on the surfboard doesn't feel exhilarated with the combination of sea, wave and color.  Yet, I wonder how many of us go through life daily in a humdrum way, living our lives the same way, day after day after day after day until we become numb with the repetition.  But, there is a better way.  We need a guide to help us and the only one that will do is a heavenly one.  Jesus is someone you can trust, someone who will never let you down, someone who will show you what life is all about...
WEB: John Chapter 10
[1] "“Most certainly, I tell you, one who doesn’t enter by the door into the sheep fold, but climbs up some other way, the same is a thief and a robber. [2] But one who enters in by the door is the shepherd of the sheep. [3] The gatekeeper opens the gate for him, and the sheep listen to his voice. He calls his own sheep by name, and leads them out. [4] Whenever he brings out his own sheep, he goes before them, and the sheep follow him, for they know his voice. [5] They will by no means follow a stranger, but will flee from him; for they don’t know the voice of strangers.”" [6] Jesus spoke this parable to them, but they didn’t understand what he was telling them.
[7] Jesus therefore said to them again, "“Most certainly, I tell you, I am the sheep’s door. [8] All who came before me are thieves and robbers, but the sheep didn’t listen to them. [9] I am the door. If anyone enters in by me, he will be saved, and will go in and go out, and will find pasture. [10] The thief only comes to steal, kill, and destroy. I came that they may have life, and may have it abundantly.
In our electronic age, we are bombarded with information.  Our lives are influenced in so many ways by people who do not have our best interest at heart.  Think of all the TV commercials you have seen during your lifetime.  Buy this and life will be better, get my book and you will succeed or lose weight and  really enjoy life.  There is no end to it because its all about greed.  But, there is one voice out there that beckons with a different motive; Jesus.  He is the door to true life (verse 10 above) and really cares.  Trust him and him alone to guide you through life and discover what real life is all about.  Somehow its like I am on the surfboard in the picture and I experience everything I should and nothing can distract me.  This world and all its treasures mean nothing; with God's guidance life becomes painted with all the colors of the rainbow and means something.
Email ThisBlogThis!Share to TwitterShare to FacebookShare to Pinterest

"THE GOSPEL OF MATTHEW" Introduction by Mark Copeland