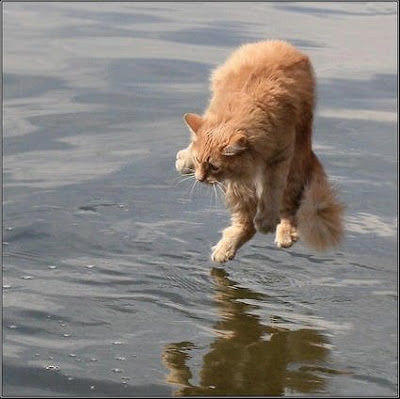 The rainy day had just begun to clear and the sun was shining as I passed Hack funeral home in Schaghticoke and started unto the two lane bridge. I wasn't going that fast, maybe 30 mph at most, but I began to skid. My skid turned into a full circle and then another and finally I was going forward, but by the passenger side of the car first. Then in horror, I noticed the car coming in my direction was doing the SAME THING. We just kept coming at one another and getting closer and closer. Finally we both stopped... just inches from each other. I am not sure how long it was before we moved our cars, but I know that I was a bit shaken and from the look on the other drivers face she was frightened. If we had hit, one of us could have gone off the bridge and it was a long, long way to the bottom.
When I saw the picture of the cat it reminded me of my skidding experience so long ago. The cat realizes what is about to happen and is fixated upon its impending doom. I know there was nothing I could have done to avoid my "almost" accident, but one thing is for sure; I can do a lot with the lifetime I have left to me. The question remains, Are you ready for the reality of this Bible passage?
Rev 20:11 And I saw a great white throne, and him that sat on it, from whose face the earth and the heaven fled away; and there was found no place for them.
Rev 20:12 And I saw the dead, small and great, stand before God; and the books were opened: and another book was opened, which is the book of life: and the dead were judged out of the things which were written in the books, according to their works.
Rev 20:13 And the sea gave up the dead which were in it; and death and hell delivered up the dead which were in them: and they were judged every man according to their works.
Rev 20:14 And death and hell were cast into the lake of fire. This is the second death.
Rev 20:15 And whoever was not found written in the book of life was cast into the lake of fire.
The Webster Bible
Email ThisBlogThis!Share to TwitterShare to FacebookShare to Pinterest
Newer Posts Older Posts Home
Subscribe to: Posts (Atom)