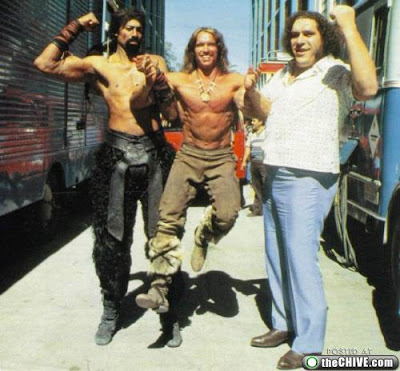 I don't know who the man on the left is, but the center one appears to be Arnold Schwartzennegger and the one on the right is Andre the Giant. Compared to the other two, Arnold looks like a tiny terminator. That is something to think about, because Arnold is one big guy. Compared to Andre, though he is a pipsqueak. That's the problem with comparison; someone else is always bigger, or smarter or more refined or .... whatever. The following passage from 2 Corinthians is something to think about.

2 Corinthians 10:7-18 WEB (R)
(7) Do you look at things only as they appear in front of your face? If anyone trusts in himself that he is Christ's, let him consider this again with himself, that, even as he is Christ's, so also we are Christ's.
(8) For though I should boast somewhat abundantly concerning our authority, (which the Lord gave for building you up, and not for casting you down) I will not be disappointed,
(9) that I may not seem as if I desire to terrify you by my letters.
(10) For, "His letters," they say, "are weighty and strong, but his bodily presence is weak, and his speech is despised."
(11) Let such a person consider this, that what we are in word by letters when we are absent, such are we also in deed when we are present.
(12) For we are not bold to number or compare ourselves with some of those who commend themselves. But they themselves, measuring themselves by themselves, and comparing themselves with themselves, are without understanding.
(13) But we will not boast beyond proper limits, but within the boundaries with which God appointed to us, which reach even to you.
(14) For we don't stretch ourselves too much, as though we didn't reach to you. For we came even as far as to you with the Good News of Christ,
(15) not boasting beyond proper limits in other men's labors, but having hope that as your faith grows, we will be abundantly enlarged by you in our sphere of influence,
(16) so as to preach the Good News even to the parts beyond you, not to boast in what someone else has already done.
(17) But "he who boasts, let him boast in the Lord."
(18) For it isn't he who commends himself who is approved, but whom the Lord commends.

Boasting is a one way street to embarrassment. There is an exception, however and that is found in verse 17. If someone boasts about God, he can't be outdone. I like it!!!!
Email ThisBlogThis!Share to TwitterShare to FacebookShare to Pinterest
Newer Posts Older Posts Home
Subscribe to: Posts (Atom)