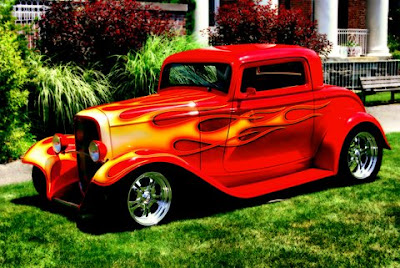 One cool car! You don't even have to look underneath the hood to know that this baby is going to fly!! Why? Because no one is going to paint an auto like this, put racing wheels if its performance is like a pinto MPG! I would guess this little "chariot of fire" would go at least 130. When I saw this car it reminded me of Elijah going to heaven. The passage from the book of second kings tells the tale.

2Ki 2:9 It happened, when they had gone over, that Elijah said to Elisha, Ask what I shall do for you, before I am taken from you. Elisha said, please let a double portion of your spirit be on me.
2Ki 2:10 He said, "You have asked a hard thing. If you see me when I am taken from you, it shall be so for you; but if not, it shall not be so."
2Ki 2:11 It happened, as they still went on, and talked, that behold, a chariot of fire and horses of fire separated them; and Elijah went up by a whirlwind into heaven. WEB

I would really have liked to see that happen! Even better, imagine being Elisha! The fantastic spectacle was confirmation that he was to be literally twice the prophet of his master Elijah. Talk about encouragement! I have always wondered about Elisha, though; why ask for a double portion of the spirit? I like to think he just wanted to serve Yahweh better and not because he wanted a chariot with more "horse power" than Elijah. I wonder if there are any speed limits when entering heaven?
Email ThisBlogThis!Share to TwitterShare to FacebookShare to Pinterest 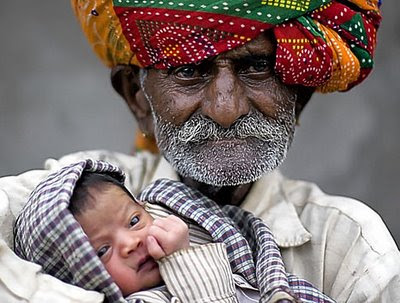 He is neither the Great-grandfather nor the Grandfather, but rather the father. This man was 90 years young when this photo was taken and plans to father children until he is 100. I can not even fathom his optimism. When others are dying all around him, HE wants more children. Strange, isn't it? Well, not so strange. There was a man in a similar situation in the Bible; lets read from the book of Genesis.
Gen 15:1 After these things the word of Yahweh came to Abram in a vision, saying, "Don't be afraid, Abram. I am your shield, your exceedingly great reward."
Gen 15:2 Abram said, "Lord Yahweh, what will you give me, seeing I go childless, and he who will inherit my estate is Eliezer of Damascus?"
Gen 15:3 Abram said, "Behold, to me you have given no seed: and, behold, one born in my house is my heir."
Gen 15:4 Behold, the word of Yahweh came to him, saying, "This man will not be your heir, but he who will come forth out of your own body will be your heir."
Gen 15:5 Yahweh brought him outside, and said, "Look now toward the sky, and count the stars, if you are able to count them." He said to Abram, "So shall your seed be."
Gen 15:6 He believed in Yahweh; and he reckoned it to him for righteousness. WEB
Abram believed he would be childless, but God had other ideas. If someone told me that I would be a father again, I would simply not believe it. Abram did and Yahweh reckoned that belief as righteousness. The man in the photo and Abram have one thing in common; they had belief that it could happen and belief is a very powerful force indeed. As for me, well, I don't think I would have the patience to do it all over again. Besides, the thought of all those dirty diapers... whew!
Email ThisBlogThis!Share to TwitterShare to FacebookShare to Pinterest
Newer Posts Older Posts Home
Subscribe to: Posts (Atom)