Butterflies, death and the will of God 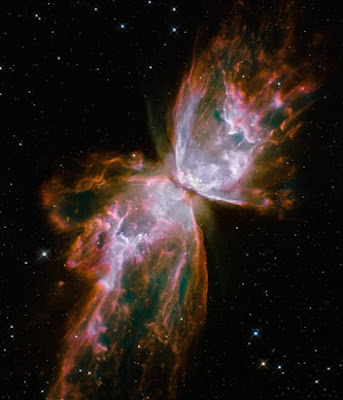 Behold: The beauty of the butterfly nebula!!!  Hubble really takes nice pictures of the cosmos, doesn't it?  It makes the mind marvel at how God could create such beauty!!!  But, don't forget that there was a cost to it; namely, the destruction of a star!!!  Somehow, though, it seems worth it because of the beauty of such a wonder in the sky.  Sometimes we forget that the beautiful things of this world often come from not-so-good occurrences.  Here is but one example...
WEB: Genesis Chapter 50

[15] When Joseph’s brothers saw that their father was dead, they said, “It may be that Joseph will hate us, and will fully pay us back for all of the evil which we did to him.” [16] They sent a message to Joseph, saying, “Your father commanded before he died, saying, [17] ‘You shall tell Joseph, “Now please forgive the disobedience of your brothers, and their sin, because they did evil to you.”’ Now, please forgive the disobedience of the servants of the God of your father.” Joseph wept when they spoke to him. [18] His brothers also went and fell down before his face; and they said, “Behold, we are your servants.” [19] Joseph said to them, “Don’t be afraid, for am I in the place of God? [20] As for you, you meant evil against me, but God meant it for good, to bring to pass, as it is this day, to save many people alive. [21] Now therefore don’t be afraid. I will nourish you and your little ones.” He comforted them, and spoke kindly to them.
Joseph was treated very badly by his brothers, but ultimately it was from God.  Joseph knew this and fortunately for the eleven they were blessed by his insight.  From their perspective, Joseph could have just as easily put all of them into slavery after Israel's death, but thank God he didn't.  Spiritual insight is something we all should try to cultivate and the way to do it is to read the Scriptures.  They will give us insight into the truth and wisdom to know how to handle all the not-so-good things that we may be exposed to.  Understanding this is fundamental to Christianity, just as seeing the beauty of an exploded nebula and knowing that it came from the death of a star is to an astronomer.
Email ThisBlogThis!Share to TwitterShare to FacebookShare to Pinterest

"THE BOOK OF ECCLESIASTES" Chapter Four by Mark Copeland