When a word processor is a typewriter... 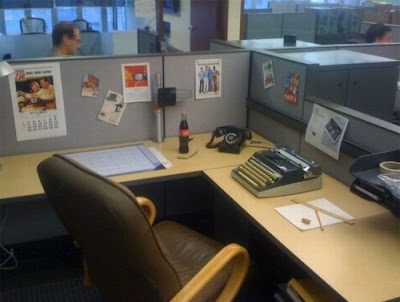 Just because something is old does NOT mean its bad.  Brains (young or OLD), pencils, slide rules and yes, even a typewriter can be useful.  When you remember a phone number instead of just using speed dial, guess what, you remembered something; your brain actually works.  If you use a piece of paper and a pencil to do math; again, brain in gear.  If the power goes out and you use your handy, dandy slide rule to determine the square root of some number, you have just one more option in life.  When I saw this picture, I thought of yesterday, yes, I mean yesterday!!  October 27th was the very first day I used the Ubuntu 11.10 operating system exclusively.  I still had to do some configuration and getting used to its very simple way of doing things (did I mention that everything is free ???) but I had a GREAT TIME.  Why couldn't Windows have been this simple??????  One of the programs I installed was a simple word processor called "Focus Writer".  Its claim to fame is simplicity in use and focus on just WRITING!!! One thing I especially liked though, was the option to turn on typewriter sounds.  Using it was a trip down memory lane, but better.  Imagine, a typewriter with cut and paste and delete!!!!  Wow!  I fell in love and for a brief period felt 40 years younger!!!!!  Sometimes old things can be the BEST THINGS!!!  Now, consider the follow verse from the book of Jeremiah...
WEB: Jeremiah Chapter 6
[16] Thus says Yahweh, “Stand in the ways and see, and ask for the old paths, ‘Where is the good way?’ and walk in it, and you will find rest for your souls. But they said, ‘We will not walk in it.’ [17] I set watchmen over you, saying, ‘Listen to the sound of the trumpet!’ But they said, ‘We will not listen!’ [18] Therefore hear, you nations, and know, congregation, what is among them. [19] Hear, earth! Behold, I will bring evil on this people, even the fruit of their thoughts, because they have not listened to my words; and as for my law, they have rejected it. [20] To what purpose comes there to me frankincense from Sheba, and the sweet cane from a far country? your burnt offerings are not acceptable, nor your sacrifices pleasing to me.”
Want to know if something is valuable?  Ask the question: Has it endured the test of time?  If the answer is "YES" then its probably worth something; it HAS ENDURED!!!  Which is why diamonds are worth more than marshmallows!!!  Think old people aren't worth anything?  Then just ask them a question about history or maybe even what a SLIDE-RULE IS? Take this principle just a bit farther... Why is a house a better investment than a bicycle?  The house will be worth more than the bicycle in 20, 30 or 40 years.  Going a bit farther even, consider how we view our lives.  If we just live for the moment and take no thought as to how we handle our money or maintain our house or treat our spouse, what do you think is going to happen in a few decades?  Probably something that is less than wonderful!!!  How about the spiritual side of your life?  What is going to happen to you in 50 or 60 years from now.  Don't know?  Find out, read your Bible and know.  You may not like the answer, but you will know and if you know, you CAN CHANGE YOUR DESTINY!!!  How, by believing that what is there is true and doing what it says to do with your life.  At this point, turn to Acts chapter two and read and reread it.  The language is plain and direct, so you need to ask yourself... Have I done what it tells me to do?  Don't be like the people in Jeremiah's time, who heard what to do and didn't do it.  Follow the "old paths" and obey the instructions of Acts chapter two and avoid evil.  Remember, Old CAN BE GOOD, but even better...OLD CAN SAVE YOUR LIFE?  What's next?  That's up to you.  Want more information... quick let me type it out for you on my word processor that is a typewriter.  Boy, am I a geek or what?
Email ThisBlogThis!Share to TwitterShare to FacebookShare to Pinterest


1Th 5:1 But concerning the times and the seasons, brothers, you have no need that anything be written to you.
1Th 5:2 For you yourselves know well that the day of the Lord comes like a thief in the night.
1Th 5:3 For when they are saying, "Peace and safety," then sudden destruction will come on them, like birth pains on a pregnant woman; and they will in no way escape.
1Th 5:4 But you, brothers, aren't in darkness, that the day should overtake you like a thief.
1Th 5:5 You are all children of light, and children of the day. We don't belong to the night, nor to darkness,
1Th 5:6 so then let's not sleep, as the rest do, but let's watch and be sober.
1Th 5:7 For those who sleep, sleep in the night, and those who are drunk are drunk in the night.
1Th 5:8 But let us, since we belong to the day, be sober, putting on the breastplate of faith and love, and, for a helmet, the hope of salvation.
1Th 5:9 For God didn't appoint us to wrath, but to the obtaining of salvation through our Lord Jesus Christ,
1Th 5:10 who died for us, that, whether we wake or sleep, we should live together with him.
1Th 5:11 Therefore exhort one another, and build each other up, even as you also do.
1Th 5:12 But we beg you, brothers, to know those who labor among you, and are over you in the Lord, and admonish you,
1Th 5:13 and to respect and honor them in love for their work's sake. Be at peace among yourselves.
1Th 5:14 We exhort you, brothers, admonish the disorderly, encourage the fainthearted, support the weak, be patient toward all.
1Th 5:15 See that no one returns evil for evil to anyone, but always follow after that which is good, for one another, and for all.
1Th 5:16 Rejoice always.
1Th 5:17 Pray without ceasing.
1Th 5:18 In everything give thanks, for this is the will of God in Christ Jesus toward you.
1Th 5:19 Don't quench the Spirit.
1Th 5:20 Don't despise prophesies.
1Th 5:21 Test all things, and hold firmly that which is good.
1Th 5:22 Abstain from every form of evil.
1Th 5:23 May the God of peace himself sanctify you completely. May your whole spirit, soul, and body be preserved blameless at the coming of our Lord Jesus Christ.
1Th 5:24 He who calls you is faithful, who will also do it.
1Th 5:25 Brothers, pray for us.
1Th 5:26 Greet all the brothers with a holy kiss.
1Th 5:27 I solemnly command you by the Lord that this letter be read to all the holy brothers.
1Th 5:28 The grace of our Lord Jesus Christ be with you. Amen.