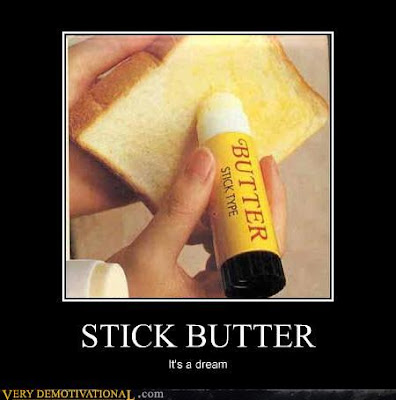 Not every new idea is a good one, but this one sure is!!!  I can't even begin to guess how many mornings I have started to make toast and then realized the butter was no where to be found, let alone a knife to spread it!!!  Sometimes, ideas may not seem to be good at first, then much later you realize their value.  Here is one such case, concerning a young man called John Mark....

Acts, Chapter 15
36 After some days Paul said to Barnabas, “Let’s return now and visit our brothers in every city in which we proclaimed the word of the Lord, to see how they are doing.”  37 Barnabas planned to take John, who was called Mark, with them also.  38 But Paul didn’t think that it was a good idea to take with them someone who had withdrawn from them in Pamphylia, and didn’t go with them to do the work.  39 Then the contention grew so sharp that they separated from each other. Barnabas took Mark with him, and sailed away to Cyprus,  40 but Paul chose Silas, and went out, being commended by the brothers to the grace of God.  41 He went through Syria and Cilicia, strengthening the assemblies.

2 Timothy, Chapter 4
6 For I am already being offered, and the time of my departure has come.  7 I have fought the good fight. I have finished the course. I have kept the faith.  8 From now on, there is stored up for me the crown of righteousness, which the Lord, the righteous judge, will give to me on that day; and not to me only, but also to all those who have loved his appearing.  9 Be diligent to come to me soon,  10 for Demas left me, having loved this present world, and went to Thessalonica; Crescens to Galatia, and Titus to Dalmatia.  11 Only Luke is with me. Take Mark, and bring him with you, for he is useful to me for service.

The apostle Paul was a brilliant man, chosen by God to spread the Good News of God to the gentiles.  God gave him insight into his will and much of the New Testament was written by him.  But Paul was NOT A PERFECT MAN!!! He was mistaken about John Mark and near the end of his life realized it (see the 2 Timothy passage above).  Its nice to know that people can change for the better (or maybe in John Mark's case, vindicated) and hopefully that will be true for all of us.  Don't let your judgment be so inflexible that you cannot change.  In other words... get a new stick (and I don't mean butter, either)!

2Ki 24:1 In his days Nebuchadnezzar king of Babylon came up, and Jehoiakim became his servant three years: then he turned and rebelled against him.
2Ki 24:2 Yahweh sent against him bands of the Chaldeans, and bands of the Syrians, and bands of the Moabites, and bands of the children of Ammon, and sent them against Judah to destroy it, according to the word of Yahweh, which he spoke by his servants the prophets.
2Ki 24:3 Surely at the commandment of Yahweh came this on Judah, to remove them out of his sight, for the sins of Manasseh, according to all that he did,
2Ki 24:4 and also for the innocent blood that he shed; for he filled Jerusalem with innocent blood: and Yahweh would not pardon.
2Ki 24:5 Now the rest of the acts of Jehoiakim, and all that he did, aren't they written in the book of the chronicles of the kings of Judah?
2Ki 24:6 So Jehoiakim slept with his fathers; and Jehoiachin his son reigned in his place.
2Ki 24:7 The king of Egypt didn't come again out of his land any more; for the king of Babylon had taken, from the brook of Egypt to the river Euphrates, all that pertained to the king of Egypt.
2Ki 24:8 Jehoiachin was eighteen years old when he began to reign; and he reigned in Jerusalem three months: and his mother's name was Nehushta the daughter of Elnathan of Jerusalem.
2Ki 24:9 He did that which was evil in the sight of Yahweh, according to all that his father had done.
2Ki 24:10 At that time the servants of Nebuchadnezzar king of Babylon came up to Jerusalem, and the city was besieged.
2Ki 24:11 Nebuchadnezzar king of Babylon came to the city, while his servants were besieging it;
2Ki 24:12 and Jehoiachin the king of Judah went out to the king of Babylon, he, and his mother, and his servants, and his princes, and his officers: and the king of Babylon took him in the eighth year of his reign.
2Ki 24:13 He carried out there all the treasures of the house of Yahweh, and the treasures of the king's house, and cut in pieces all the vessels of gold, which Solomon king of Israel had made in the temple of Yahweh, as Yahweh had said.
2Ki 24:14 He carried away all Jerusalem, and all the princes, and all the mighty men of valor, even ten thousand captives, and all the craftsmen and the smiths; none remained, save the poorest sort of the people of the land.
2Ki 24:15 He carried away Jehoiachin to Babylon; and the king's mother, and the king's wives, and his officers, and the chief men of the land, carried he into captivity from Jerusalem to Babylon.
2Ki 24:16 All the men of might, even seven thousand, and the craftsmen and the smiths one thousand, all of them strong and apt for war, even them the king of Babylon brought captive to Babylon.
2Ki 24:17 The king of Babylon made Mattaniah, Jehoiachin's father's brother, king is his place, and changed his name to Zedekiah.
2Ki 24:18 Zedekiah was twenty-one years old when he began to reign; and he reigned eleven years in Jerusalem: and his mother's name was Hamutal the daughter of Jeremiah of Libnah.
2Ki 24:19 He did that which was evil in the sight of Yahweh, according to all that Jehoiakim had done.
2Ki 24:20 For through the anger of Yahweh did it happen in Jerusalem and Judah, until he had cast them out from his presence. Zedekiah rebelled against the king of Babylon.

"THE FIRST EPISTLE TO THE CORINTHIANS" Chapter Ten by Mark Copeland