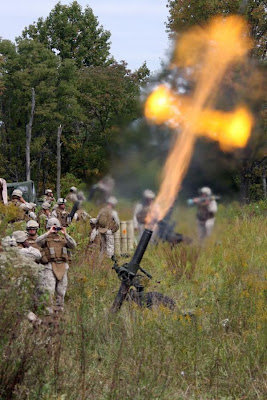 I wonder if this photo was altered? Probably, but you never know. I picked it because of something I saw on TV today. Terry Jones was looking for a sign from God and wouldn't you know an Iman gave it to him. Intrigue around the on again off again Koran burning (perhaps on for Sept. 11, perhaps not). I find it coincidental that suddenly a local Iman becomes involved with a NYC Iman who is planning to build a mosque on the site of the despicable airplane attack of nine years ago. Then, along comes Donald Trump to save the day (with a 25% above purchase price bonus). Could it be that suddenly some people are looking for an easy way out of a difficult situation and invoking God in the matter makes everything alright. The question is: How do we know what is real and what is unreal? Consider the following passage:
Acts 3:12-22 (WEB)
12) When Peter saw it, he responded to the people, “You men of Israel, why do you marvel at this man? Why do you fasten your eyes on us, as though by our own power or godliness we had made him walk?
13) The God of Abraham, Isaac, and Jacob, the God of our fathers, has glorified his Servant Jesus, whom you delivered up, and denied in the presence of Pilate, when he had determined to release him.
14) But you denied the Holy and Righteous One, and asked for a murderer to be granted to you,
15) and killed the Prince of life, whom God raised from the dead, to which we are witnesses.
16) By faith in his name, his name has made this man strong, whom you see and know. Yes, the faith which is through him has given him this perfect soundness in the presence of you all.
17) “Now, brothers, I know that you did this in ignorance, as did also your rulers.
18) But the things which God announced by the mouth of all his prophets, that Christ should suffer, he thus fulfilled.
19) “Repent therefore, and turn again, that your sins may be blotted out, so that there may come times of refreshing from the presence of the Lord,
20) and that he may send Christ Jesus, who was ordained for you before,
21) whom heaven must receive until the times of restoration of all things, which God spoke long ago by the mouth of his holy prophets.
22) For Moses indeed said to the fathers, ‘The Lord God will raise up a prophet for you from among your brothers, like me. You shall listen to him in all things whatever he says to you.
(Acts 3:12-22, WEB)

Jesus was God's sign, his messenger. To explain all his message in the context of this blog would be impossible, but everyone will agree he preached love. In light of this, I have to ask: How is this book burning an example of love? It appears to be predicated upon hate and without doubt violates the foundations of religious freedom this country is founded upon. For once, I find myself actually praising our current president for his words on this matter!!! The truth is that people can find a "sign" practically anywhere, if they look hard enough; but, that doesn't mean that their "sign" is from God. More likely than not, it is from their own desire for something. I pray that this proposed burning be stopped and cooler heads rule the situation. Do yourself a favor, listen to Jesus and NOT Terry Jones. Remember, people tend to photo-shop life as well as computer images.
Email ThisBlogThis!Share to TwitterShare to FacebookShare to Pinterest 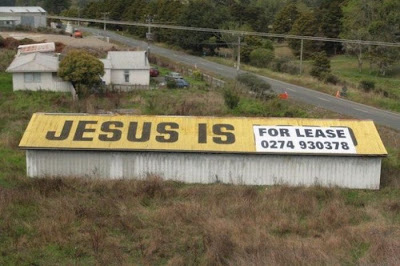 Jesus is "for lease"? Really? Of course not, but the sign does make you do a double take, though. Money and religion; now there is a combination! I can honestly say money (or the lack of it) caused so many problems during my ministerial years that it hindered all my best efforts. Why? Because over the past few decades there has been so much damage done by tele-evangelists that people are reluctant to give as they probably should. So much so, that even when a congregation asked me to preach on it I would hesitate. Yet, I did as I was asked and I had a good teacher, as you will see by the following passage.
2 Corinthians 9:1-10 (WEB)
1) It is indeed unnecessary for me to write to you concerning the service to the saints,
2) for I know your readiness, of which I boast on your behalf to them of Macedonia, that Achaia has been prepared for a year past. Your zeal has stirred up very many of them.
3) But I have sent the brothers that our boasting on your behalf may not be in vain in this respect, that, just as I said, you may be prepared,
4) so that I won’t by any means, if there come with me any of Macedonia and find you unprepared, we (to say nothing of you) should be disappointed in this confident boasting.
5) I thought it necessary therefore to entreat the brothers that they would go before to you, and arrange ahead of time the generous gift that you promised before, that the same might be ready as a matter of generosity, and not of greediness.
6) Remember this: he who sows sparingly will also reap sparingly. He who sows bountifully will also reap bountifully.
7) Let each man give according as he has determined in his heart; not grudgingly, or under compulsion; for God loves a cheerful giver.
8) And God is able to make all grace abound to you, that you, always having all sufficiency in everything, may abound to every good work.
9) As it is written, “He has scattered abroad, he has given to the poor. His righteousness remains forever.”
10) Now may he who supplies seed to the sower and bread for food, supply and multiply your seed for sowing, and increase the fruits of your righteousness;
(2 Corinthians 9:1-10, WEB)

The passage really is self-explanatory, but let me sum it up in a phrase: Jesus is LORD. If Jesus is truly LORD, then money doesn't really matter as much as WE think it does. How much should a person give? The answer is found in another question: How much do you love your LORD? When I saw the picture above, I knew of course that Jesus was not "for lease", but that in fact the words under the sign were LORD. But, it does make you think, doesn't it?
Email ThisBlogThis!Share to TwitterShare to FacebookShare to Pinterest
Newer Posts Older Posts Home
Subscribe to: Posts (Atom)