You just never know about people 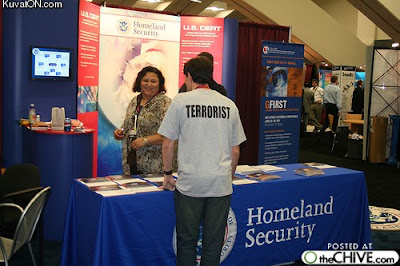 I marvel at the security of the Homeland Security booth! Given the events of the past few years, this man must be a little "off" to even wear this t-shirt. If only all terrorists would wear Id's then this world would be a far better place. This picture does raise the question: How do you tell the "good guys" from the "not so good" ones? Sometimes you have a feeling about people though and here is an example of one who has a most unusual name: Doeg.

1Sa 22:6 Saul heard that David was discovered, and the men who were with him: now Saul was sitting in Gibeah, under the tamarisk tree in Ramah, with his spear in his hand, and all his servants were standing about him.
1Sa 22:7 Saul said to his servants who stood about him, Hear now, you Benjamites; will the son of Jesse give everyone of you fields and vineyards, will he make you all captains of thousands and captains of hundreds,
1Sa 22:8 that all of you have conspired against me, and there is none who discloses to me when my son makes a league with the son of Jesse, and there is none of you who is sorry for me, or discloses to me that my son has stirred up my servant against me, to lie in wait, as at this day?
1Sa 22:9 Then answered Doeg the Edomite, who stood by the servants of Saul, and said, I saw the son of Jesse coming to Nob, to Ahimelech the son of Ahitub.
1Sa 22:10 He inquired of Yahweh for him, and gave him food, and gave him the sword of Goliath the Philistine.
1Sa 22:11 Then the king sent to call Ahimelech the priest, the son of Ahitub, and all his father's house, the priests who were in Nob: and they came all of them to the king.
1Sa 22:12 Saul said, Hear now, you son of Ahitub. He answered, Here I am, my lord.
1Sa 22:13 Saul said to him, Why have you conspired against me, you and the son of Jesse, in that you have given him bread, and a sword, and have inquired of God for him, that he should rise against me, to lie in wait, as at this day?
1Sa 22:14 Then Ahimelech answered the king, and said, Who among all your servants is so faithful as David, who is the king's son-in-law, and is taken into your council, and is honorable in your house?
1Sa 22:15 Have I today begun to inquire of God for him? be it far from me: don't let the king impute anything to his servant, nor to all the house of my father; for your servant knows nothing of all this, less or more.
1Sa 22:16 The king said, You shall surely die, Ahimelech, you, and all your father's house.
1Sa 22:17 The king said to the guard who stood about him, Turn, and kill the priests of Yahweh; because their hand also is with David, and because they knew that he fled, and didn't disclose it to me. But the servants of the king wouldn't put forth their hand to fall on the priests of Yahweh. 1Sa 22:18 The king said to Doeg, Turn and attack the priests! Doeg the Edomite turned, and he attacked the priests, and he killed on that day eighty-five people who wore a linen ephod.
1Sa 22:19 Nob, the city of the priests, struck he with the edge of the sword, both men and women, children and nursing babies, and cattle and donkeys and sheep, with the edge of the sword.
1Sa 22:20 One of the sons of Ahimelech, the son of Ahitub, named Abiathar, escaped, and fled after David.
1Sa 22:21 Abiathar told David that Saul had slain Yahweh's priests.
1Sa 22:22 David said to Abiathar, I knew on that day, when Doeg the Edomite was there, that he would surely tell Saul: I have occasioned the death of all the persons of your father's house.
1Sa 22:23 Stay with me, don't be afraid; for he who seeks my life seeks your life: for with me you shall be in safeguard.
World English Bible

Doeg informed the Saul about David; OK, that's not so bad. What is bad though is that he kills the priests of Yahweh even though they proclaim their innocence and the conduct of those around Saul seems to side with the priests. You just never know about people, some just have no conscience at all like this Doeg. David did however and protected Ahimelech. Maybe he should have followed his instinct and done something about Doeg, but even good people make mistakes. Besides, Doeg wasn't wearing his terrorist T-Shirt.
Email ThisBlogThis!Share to TwitterShare to FacebookShare to Pinterest
Newer Posts Older Posts Home
Subscribe to: Posts (Atom)