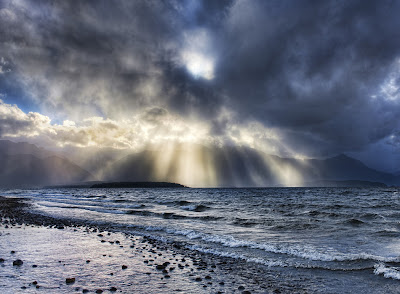 It has taken quite a bit of adjustment to become a "Floridian". The warmer temperatures thins your blood out and now 70 degrees feels like 50 did a decade ago. Until I saw this picture I had almost forgotten how gray and dreary the sky can be in the winters of upstate New York. Yet, the rays of light in the picture give hope; hope of fairer skies. The Bible has a lot to say about hope, far more than I could ever begin to address in this blog. But consider just one man; Abraham.

Romans 4
1) What then will we say that Abraham, our forefather, has found according to the flesh?
2) For if Abraham was justified by works, he has something to boast about, but not toward God.
3) For what does the Scripture say? “Abraham believed God, and it was accounted to him for righteousness.”
4) Now to him who works, the reward is not counted as grace, but as something owed.
5) But to him who doesn’t work, but believes in him who justifies the ungodly, his faith is accounted for righteousness.
6) Even as David also pronounces blessing on the man to whom God counts righteousness apart from works,
7) “Blessed are they whose iniquities are forgiven, whose sins are covered.
8) Blessed is the man whom the Lord will by no means charge with sin.”
9) Is this blessing then pronounced on the circumcised, or on the uncircumcised also? For we say that faith was accounted to Abraham for righteousness.
10) How then was it counted? When he was in circumcision, or in uncircumcision? Not in circumcision, but in uncircumcision.
11) He received the sign of circumcision, a seal of the righteousness of the faith which he had while he was in uncircumcision, that he might be the father of all those who believe, though they might be in uncircumcision, that righteousness might also be accounted to them.
12) He is the father of circumcision to those who not only are of the circumcision, but who also walk in the steps of that faith of our father Abraham, which he had in uncircumcision.
13) For the promise to Abraham and to his seed that he should be heir of the world wasn’t through the law, but through the righteousness of faith.
14) For if those who are of the law are heirs, faith is made void, and the promise is made of no effect.
15) For the law works wrath, for where there is no law, neither is there disobedience.
16) For this cause it is of faith, that it may be according to grace, to the end that the promise may be sure to all the seed, not to that only which is of the law, but to that also which is of the faith of Abraham, who is the father of us all.
17) As it is written, “I have made you a father of many nations.” This is in the presence of him whom he believed: God, who gives life to the dead, and calls the things that are not, as though they were.
18) Who in hope believed against hope, to the end that he might become a father of many nations, according to that which had been spoken, “So will your seed be.”
19) Without being weakened in faith, he didn’t consider his own body, already having been worn out, (he being about a hundred years old), and the deadness of Sarah’s womb.
20) Yet, looking to the promise of God, he didn’t waver through unbelief, but grew strong through faith, giving glory to God,
21) and being fully assured that what he had promised, he was also able to perform.
22) Therefore it also was “reckoned to him for righteousness.”
23) Now it was not written that it was accounted to him for his sake alone,
24) but for our sake also, to whom it will be accounted, who believe in him who raised Jesus, our Lord, from the dead,
25) who was delivered up for our trespasses, and was raised for our justification.
Here was a man of faith. Put yourself in his position for a moment; 100 years old, a 90 year old wife and no child. God tells you that you are going to be father and you believe it; really believe it. Wow, what faith!! Yet Abraham was a mere man, subject to all the problems that we humans encounter, but being given a promise by God, HE GREW STRONGER! There may never be another man like Abraham, yet his life is an example to us all and his faith can be OUR FAITH. God in heaven, thank you for this man; because of him it is easier to trust in God and have hope. Reminds me of the old song "blue skies", but so far I haven't thought of how the water in the picture fits it. Hopefully, I will think of something; I promise.
Email ThisBlogThis!Share to TwitterShare to FacebookShare to Pinterest
Newer Posts Older Posts Home
Subscribe to: Posts (Atom)