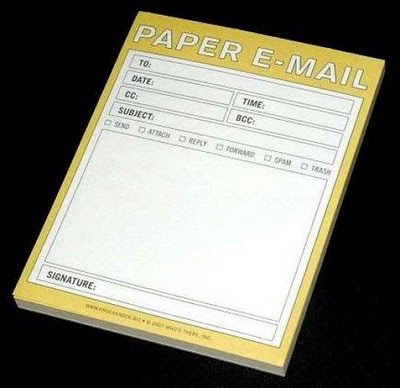 Paper e-mail; interesting title, we used to call it a note.  But, I suppose the youth of today may never have seen this, as computers have replaced a great many things.  This is nothing new, however, because even in the time of the new testament, sometimes its just easier to do things more simply.  The apostle John wrote...

2nd John
12 Having many things to write to you, I don’t want to do so with paper and ink, but I hope to come to you, and to speak face to face, that our joy may be made full.

Whether it be communication via a note, a telegraph message, snail-mail or even a written letter (as in John's case, above) sometimes its actually better to see people face to face.  You can tell so much more that way! Its personal, its natural and doesn't require any externals.  Maybe that is why God didn't put notepads at the end of our wrists... he wanted us to talk!
Email ThisBlogThis!Share to TwitterShare to FacebookShare to Pinterest

"THE EPISTLE TO THE ROMANS" Chapter Six by Mark Copeland