The wake I leave behind 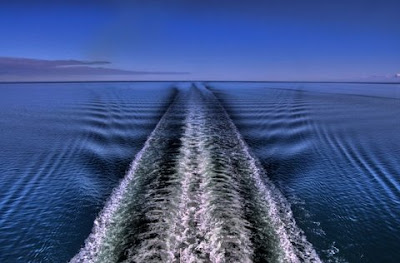 Some of my earliest memories are of being on my father's speedboat and watching the wake that was left behind. Life is somewhat like being on that speedboat; ever forward, with the effects of what you do left behind you. Family, the work you have done and the people who call you friend all say a great deal about you. While these are important, I think the things that really matter are those things that bring about change in the lives of others; encouragement, understanding and most of all the love that you give away will be the most important part of your life's "wake". Nothing lasts forever, but your life could have an impact on literally thousands of people. Some people live their lives as if they will never end; but all do. I like this passage from the book of Second Peter because it reminds me that someday everything I have ever done will be on display.
2Pe 3:3 knowing this first of all, that scoffers will come in the last days with scoffing, following their own sinful desires.
2Pe 3:4 They will say, "Where is the promise of his coming? For ever since the fathers fell asleep, all things are continuing as they were from the beginning of creation."
2Pe 3:5 For they deliberately overlook this fact, that the heavens existed long ago, and the earth was formed out of water and through water by the word of God,
2Pe 3:6 and that by means of these the world that then existed was deluged with water and perished.
2Pe 3:7 But by the same word the heavens and earth that now exist are stored up for fire, being kept until the day of judgment and destruction of the ungodly.
2Pe 3:8 But do not overlook this one fact, beloved, that with the Lord one day is as a thousand years, and a thousand years as one day.
2Pe 3:9 The Lord is not slow to fulfill his promise as some count slowness, but is patient toward you, not wishing that any should perish, but that all should reach repentance.
2Pe 3:10 But the day of the Lord will come like a thief, and then the heavens will pass away with a roar, and the heavenly bodies will be burned up and dissolved, and the earth and the works that are done on it will be exposed. ESV
I don't know when and I really don't understand how, but what we do here and now will be shown for what it really is. I guess that is where faith comes in, where you come to the point of asking yourself: What have I done with my life and how will I be judged for it? I know that I cannot change the past, but I can determine that from now on the wake I leave behind will be better each day! Think about your life and then do something about it; no one is promised tomorrow, we only have today. And oh, yes... watch where you are driving your boat, you might hit a reef of sin!
Email ThisBlogThis!Share to TwitterShare to FacebookShare to Pinterest
Newer Posts Older Posts Home
Subscribe to: Posts (Atom)