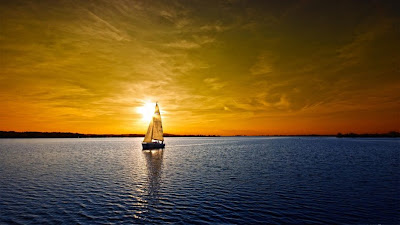 I will let you in on a little secret: I have always wanted a sailboat.  For years I have imagined the pleasure of being on the open water, the wind blowing in my face, with no daily pressures or deadlines.  Right now, I don't foresee this as ever happening.  I have no idea how I could possibly raise the funds necessary to do this or whether or not I am just too old to even try such a thing.  However, I can envision the peace and tranquility that this picture represents and realize that someday I will experience such joy... in heaven.  And here is why I know it...
WEB: Revelation of John Chapter 22
[1] He showed me a river of water of life, clear as crystal, proceeding out of the throne of God and of the Lamb, [2] in the middle of its street. On this side of the river and on that was the tree of life, bearing twelve kinds of fruits, yielding its fruit every month. The leaves of the tree were for the healing of the nations. [3] There will be no curse any more. The throne of God and of the Lamb will be in it, and his servants serve him. [4] They will see his face, and his name will be on their foreheads. [5] There will be no night, and they need no lamp light; for the Lord God will illuminate them. They will reign forever and ever.
Eventually this scripture will become a reality for me and that is better than any sailboat or peaceful day that I could ever possibly imagine.  To be with Jesus is better than anything this world could possibly offer.; it will be a "dream come true".  When you know that your dreams will come true, nothing else really matters, even something you think that you have always wanted.  Besides, who knows if I might get seasick on the water...
Email ThisBlogThis!Share to TwitterShare to FacebookShare to Pinterest


Rev 17:1 One of the seven angels who had the seven bowls came and spoke with me, saying, "Come here. I will show you the judgment of the great prostitute who sits on many waters,
Rev 17:2 with whom the kings of the earth committed sexual immorality, and those who dwell in the earth were made drunken with the wine of her sexual immorality."
Rev 17:3 He carried me away in the Spirit into a wilderness. I saw a woman sitting on a scarlet-colored animal, full of blasphemous names, having seven heads and ten horns.
Rev 17:4 The woman was dressed in purple and scarlet, and decked with gold and precious stones and pearls, having in her hand a golden cup full of abominations and the impurities of the sexual immorality of the earth.
Rev 17:5 And on her forehead a name was written, "MYSTERY, BABYLON THE GREAT, THE MOTHER OF THE PROSTITUTES AND OF THE ABOMINATIONS OF THE EARTH."
Rev 17:6 I saw the woman drunken with the blood of the saints, and with the blood of the martyrs of Jesus. When I saw her, I wondered with great amazement.
Rev 17:7 The angel said to me, "Why do you wonder? I will tell you the mystery of the woman, and of the beast that carries her, which has the seven heads and the ten horns.
Rev 17:8 The beast that you saw was, and is not; and is about to come up out of the abyss and to go into destruction. Those who dwell on the earth and whose names have not been written in the book of life from the foundation of the world will marvel when they see that the beast was, and is not, and shall be present.
Rev 17:9 Here is the mind that has wisdom. The seven heads are seven mountains, on which the woman sits.
Rev 17:10 They are seven kings. Five have fallen, the one is, the other has not yet come. When he comes, he must continue a little while.
Rev 17:11 The beast that was, and is not, is himself also an eighth, and is of the seven; and he goes to destruction.
Rev 17:12 The ten horns that you saw are ten kings who have received no kingdom as yet, but they receive authority as kings, with the beast, for one hour.
Rev 17:13 These have one mind, and they give their power and authority to the beast.
Rev 17:14 These will war against the Lamb, and the Lamb will overcome them, for he is Lord of lords, and King of kings. They also will overcome who are with him, called and chosen and faithful."
Rev 17:15 He said to me, "The waters which you saw, where the prostitute sits, are peoples, multitudes, nations, and languages.
Rev 17:16 The ten horns which you saw, and the beast, these will hate the prostitute, and will make her desolate, and will make her naked, and will eat her flesh, and will burn her utterly with fire.
Rev 17:17 For God has put in their hearts to do what he has in mind, and to be of one mind, and to give their kingdom to the beast, until the words of God should be accomplished.
Rev 17:18 The woman whom you saw is the great city, which reigns over the kings of the earth."


Rev 18:1 After these things, I saw another angel coming down out of the sky, having great authority. The earth was illuminated with his glory.
Rev 18:2 He cried with a mighty voice, saying, "Fallen, fallen is Babylon the great, and she has become a habitation of demons, a prison of every unclean spirit, and a prison of every unclean and hateful bird!
Rev 18:3 For all the nations have drunk of the wine of the wrath of her sexual immorality, the kings of the earth committed sexual immorality with her, and the merchants of the earth grew rich from the abundance of her luxury."
Rev 18:4 I heard another voice from heaven, saying, "Come out of her, my people, that you have no participation in her sins, and that you don't receive of her plagues,
Rev 18:5 for her sins have reached to the sky, and God has remembered her iniquities.
Rev 18:6 Return to her just as she returned, and repay her double as she did, and according to her works. In the cup which she mixed, mix to her double.
Rev 18:7 However much she glorified herself, and grew wanton, so much give her of torment and mourning. For she says in her heart, 'I sit a queen, and am no widow, and will in no way see mourning.'
Rev 18:8 Therefore in one day her plagues will come: death, mourning, and famine; and she will be utterly burned with fire; for the Lord God who has judged her is strong.
Rev 18:9 The kings of the earth, who committed sexual immorality and lived wantonly with her, will weep and wail over her, when they look at the smoke of her burning,
Rev 18:10 standing far away for the fear of her torment, saying, 'Woe, woe, the great city, Babylon, the strong city! For your judgment has come in one hour.'
Rev 18:11 The merchants of the earth weep and mourn over her, for no one buys their merchandise any more;
Rev 18:12 merchandise of gold, silver, precious stones, pearls, fine linen, purple, silk, scarlet, all expensive wood, every vessel of ivory, every vessel made of most precious wood, and of brass, and iron, and marble;
Rev 18:13 and cinnamon, incense, perfume, frankincense, wine, olive oil, fine flour, wheat, sheep, horses, chariots, and people's bodies and souls.
Rev 18:14 The fruits which your soul lusted after have been lost to you, and all things that were dainty and sumptuous have perished from you, and you will find them no more at all.
Rev 18:15 The merchants of these things, who were made rich by her, will stand far away for the fear of her torment, weeping and mourning;
Rev 18:16 saying, 'Woe, woe, the great city, she who was dressed in fine linen, purple, and scarlet, and decked with gold and precious stones and pearls!
Rev 18:17 For in an hour such great riches are made desolate.' Every shipmaster, and everyone who sails anywhere, and mariners, and as many as gain their living by sea, stood far away,
Rev 18:18 and cried out as they looked at the smoke of her burning, saying, 'What is like the great city?'
Rev 18:19 They cast dust on their heads, and cried, weeping and mourning, saying, 'Woe, woe, the great city, in which all who had their ships in the sea were made rich by reason of her great wealth!' For in one hour is she made desolate.
Rev 18:20 "Rejoice over her, O heaven, you saints, apostles, and prophets; for God has judged your judgment on her."
Rev 18:21 A mighty angel took up a stone like a great millstone and cast it into the sea, saying, "Thus with violence will Babylon, the great city, be thrown down, and will be found no more at all.
Rev 18:22 The voice of harpists, minstrels, flute players, and trumpeters will be heard no more at all in you. No craftsman, of whatever craft, will be found any more at all in you. The sound of a mill will be heard no more at all in you.
Rev 18:23 The light of a lamp will shine no more at all in you. The voice of the bridegroom and of the bride will be heard no more at all in you; for your merchants were the princes of the earth; for with your sorcery all the nations were deceived.
Rev 18:24 In her was found the blood of prophets and of saints, and of all who have been slain on the earth."
Email ThisBlogThis!Share to TwitterShare to FacebookShare to Pinterest

Distracted by Good by Mark Copeland