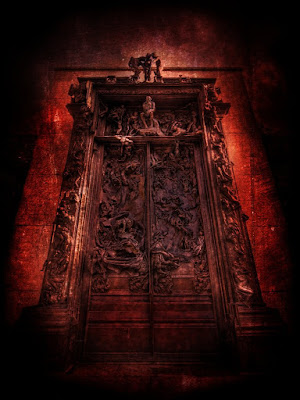 Dante's gate to hell is terrifying sight. I have never thought about Hell much, except that I don't want to go there. However, someone I used to work with confessed that in a drug-induced state he had visited there. What struck him most was the sense of ever-present dread at the overpowering hatred all around him... and the searing, scorching heat!!! There were beings (I assume the cast down angels) with rather large fangs and hands that ended in razor sharp nails. However, their most prominent feature was their crimson eyes that glowed with intimidating hatred. This vision scared him so much that he actually stopped his wicked lifestyle for a few days. However, even this experience wasn't enough to stop him for long and I am sorry to say his old ways returned and even became worse. The Bible refers to Hell in several places and this one is told by Jesus himself in the book of Luke.
Luk 16:19 And there was a certain rich man; and he was accustomed to don a purple robe and fine linen, making merry in luxury day by day.
Luk 16:20 And there was a certain poor one named Lazarus who had been laid at his doorway, having been ulcerated,
Luk 16:21 and longing to be filled from the crumbs that were falling from the table of the rich one. But coming, even the dogs licked his sores.
Luk 16:22 And it happened, the poor one died and was carried away by the angels into the bosom of Abraham. And the rich one also died and was buried.
Luk 16:23 And being in torments in hell, lifting up his eyes, he sees Abraham afar off and Lazarus in his bosom.
Luk 16:24 And calling he said, Father Abraham, have pity on me and send Lazarus that he may dip the tip of his finger in water and cool my tongue, for I am suffering in this flame.
Luk 16:25 But Abraham said, Child, remember that you fully received your good things in your lifetime, and Lazarus likewise the bad things. But now he is comforted, and you are suffering.
Luk 16:26 And besides all these things, a great chasm has been fixed between us and you, so that those desiring to pass from here to you are not able, nor can they pass from there to us.
LITV
No way out, none at all! Hell is a place you really don't return from. It is something to be very, very afraid of. Yet how many untold myriads of those who refuse to follow God will be there! This isn't just a one time experience like my co-worked had--- its forever! Final judgment and that's that. It doesn't have to happen though, people have the gift of free will and the opportunity to change as long as there is life. So, listen, already! Turn to God for help, before its too late, and the hope of heaven turns into the despair of the utterly condemned sufferer.
Email ThisBlogThis!Share to TwitterShare to FacebookShare to Pinterest
Newer Posts Older Posts Home
Subscribe to: Posts (Atom)