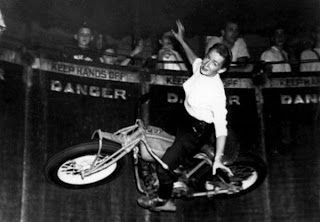 Well, here I am again; its late at night and my legs are preventing me from sleeping, so I thought I would do a post.  Then I came upon this picture.  Nothing I haven't seen before, but it did bring back memories of the Schaghticoke fair in upstate New York and the first time I saw someone do this (I think I was about 8 or 9).  It was pretty amazing then, but now, well, I know how its done so its no big deal.  Yet, I do remember how wonderful it was to see it the first time.  Reminds me of something the Apostle Paul wrote.
Ephesians 3:1-11 (WEB)1) For this cause I, Paul, am the prisoner of Christ Jesus on behalf of you Gentiles,
2) if it is so that you have heard of the administration of that grace of God which was given me toward you;
3) how that by revelation the mystery was made known to me, as I wrote before in few words,
4) by which, when you read, you can perceive my understanding in the mystery of Christ;
5) which in other generations was not made known to the children of men, as it has now been revealed to his holy apostles and prophets in the Spirit;
6) that the Gentiles are fellow heirs, and fellow members of the body, and fellow partakers of his promise in Christ Jesus through the Good News,
7) of which I was made a servant, according to the gift of that grace of God which was given me according to the working of his power.
8) To me, the very least of all saints, was this grace given, to preach to the Gentiles the unsearchable riches of Christ,
9) and to make all men see what is the administration of the mystery which for ages has been hidden in God, who created all things through Jesus Christ;
10) to the intent that now through the assembly the manifold wisdom of God might be made known to the principalities and the powers in the heavenly places,
11) according to the eternal purpose which he purposed in Christ Jesus our Lord;


If you have ever read all the way through the old testament, then you know how strange some of the prophets can be; Ezekiel, Daniel, Joel, just to mention a few.  Then imagine you read Ephesians for the first time... bingo, everything makes sense; it all fits together!!!  Perhaps for some this Ephesians passage may seem "old hat", but every single time I read it, its new and refreshes my spiritual being.  Now that is something great indeed!!!  Oh, yes, don't ask me if I would try doing that motorcycle stunt; I wouldn't even think about it.  Any volunteers out there?
Email ThisBlogThis!Share to TwitterShare to FacebookShare to Pinterest
Newer Posts Older Posts Home
Subscribe to: Posts (Atom)