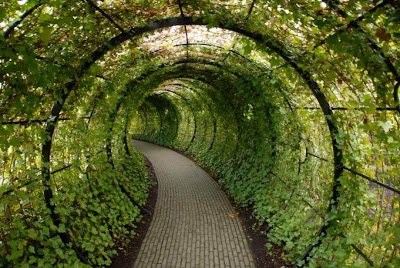 What would you call this? A living tunnel, an extended Arboretum, or a "V-e-g-e tunnel" or something else?  Whatever it is, the word RELAXING comes to mind!  Individual potted plants don't do a lot for me, but this does!!!  Its enclosed, but not so much so as to cause claustrophobia. Simply put, its relaxing.  A lot of things in life are like that... they remind you of feelings; take this famous Psalm of king David...

A Psalm by David.

1 Yahweh is my shepherd:
I shall lack nothing.


2 He makes me lie down in green pastures.
He leads me beside still waters.


3 He restores my soul.
He guides me in the paths of righteousness for his name’s sake.


4 Even though I walk through the valley of the shadow of death,
I will fear no evil, for you are with me.
Your rod and your staff, they comfort me.


5 You prepare a table before me in the presence of my enemies.


You anoint my head with oil.
My cup runs over.


6 Surely goodness and loving kindness shall follow me all the days of my life,
and I will dwell in Yahweh’s house forever.

This Psalm simply exudes "caring"!!!  God will care for me and I have nothing to be overly concerned about.  I can relax, live my life and KNOW THAT EVERYTHING WILL BE OKAY!!!  Perhaps contentment would be a good alternate word.  You pick what seems appropriate for you.  All I know is that the picture and the Psalm seem to go together and they seem to say that the path of your life is pleasant.  Not a bad thought on a warm Spring day.  Go outside, enjoy the returning greenery and remember... God made it all... and for your enjoyment!!!!
Email ThisBlogThis!Share to TwitterShare to FacebookShare to Pinterest