Nothing more, nothing less. 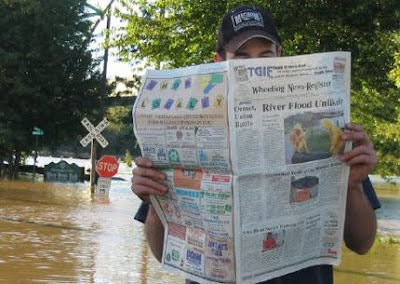 Want to know the future; don't read this paper. There is not going to be a flood...right! We humans are always fascinated by "inside knowledge" because it is a form of power. But when it comes to matters of religion, we already have everything we need to know. Yet the religious leaders came to Jesus asking for a sign; Why?


Matthew 16:1-4 WEB (R)
(1) The Pharisees and Sadducees came, and testing him, asked him to show them a sign from heaven.
(2) But he answered them, "When it is evening, you say, 'It will be fair weather, for the sky is red.'
(3) In the morning, 'It will be foul weather today, for the sky is red and threatening.' Hypocrites! You know how to discern the appearance of the sky, but you can't discern the signs of the times!
(4) An evil and adulterous generation seeks after a sign, and there will be no sign given to it, except the sign of the prophet Jonah." He left them, and departed.

If there is a lot of water, there may be a flood; daa! Still, some people will say there is no flood, even when the waters are up to their knees. Jesus had told the religious leaders who he was and performed many miracles before chapter sixteen, but that wasn't enough. So, why were they asking again? Because they wanted to find fault with him; to discredit him because they really did not WANT TO BELIEVE. This was a sign of their evil heart and lack of spiritual perception. Truth is, we believe exactly what we want to, nothing more, nothing less.
Email ThisBlogThis!Share to TwitterShare to FacebookShare to Pinterest 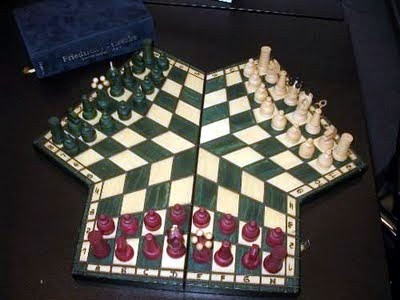 I imagine most people have never heard of three player chess, but it has perked my curiosity over the years. It seems to me that it would be more like war than the standard chess I have played over the years; more true to what war is really like. It also occurred to me that this board could also represent truth as well; my truth, your truth and God's truth. Having this thought I thought about Pilate's response to Jesus....

John 18:33-38 WEB (R)
(33) Pilate therefore entered again into the Praetorium, called Jesus, and said to him, "Are you the King of the Jews?"
(34) Jesus answered him, "Do you say this by yourself, or did others tell you about me?"
(35) Pilate answered, "I'm not a Jew, am I? Your own nation and the chief priests delivered you to me. What have you done?"
(36) Jesus answered, "My Kingdom is not of this world. If my Kingdom were of this world, then my servants would fight, that I wouldn't be delivered to the Jews. But now my Kingdom is not from here."
(37) Pilate therefore said to him, "Are you a king then?" Jesus answered, "You say that I am a king. For this reason I have been born, and for this reason I have come into the world, that I should testify to the truth. Everyone who is of the truth listens to my voice."
(38) Pilate said to him, "What is truth?" When he had said this, he went out again to the Jews, and said to them, "I find no basis for a charge against him.

If even Pilate could see Jesus was innocent, what does this say about the Jews? To me, the term "narrow minded" comes to mind. But, that is from my perspective; I might have thought differently about them if I lived in A.D. 33. The point is that we should be open to the views of others and consider truth in the three fold perspective of mine, yours and God's. Hint, the more you focus on the last one in the list, the better you will be able to understand the other two. Now, having said all this, I wonder if alliances are allowed in three player chess; if so, I pick God.
Email ThisBlogThis!Share to TwitterShare to FacebookShare to Pinterest
Newer Posts Older Posts Home
Subscribe to: Posts (Atom)