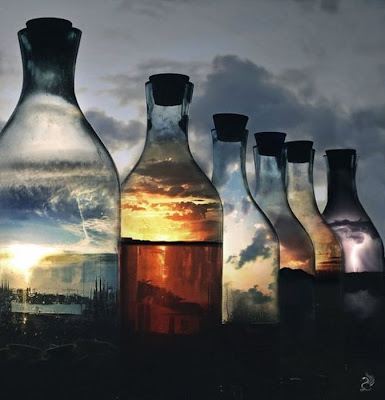 Behold, the power of photo-shop!!!  Clever, but not clever enough!!!  I might have believed it if it had not been for the second, fourth and fifth bottles.  There is no way something that different could be of the same scene.  Except of course, if they were of the same scene over a period of time and the pictures were merged.  Whatever, they were still shopped.  These bottles remind me a little of faith in that they may all be of the same scene, just progressively.  That's how our life works, we progress through time and so does our understanding of THE FAITH.  Which in turn reminds me of the book of Jude...

The Book of Jude
1 Jude, a servant of Jesus Christ, and brother of James, to those who are called, sanctified by God the Father, and kept for Jesus Christ:  2 Mercy to you and peace and love be multiplied.
3 Beloved, while I was very eager to write to you about our common salvation, I was constrained to write to you exhorting you to contend earnestly for the faith which was once for all delivered to the saints.  4 For there are certain men who crept in secretly, even those who were long ago written about for this condemnation: ungodly men, turning the grace of our God into indecency, and denying our only Master, God, and Lord, Jesus Christ.

THE TRUTH DOES NOT CHANGE!  Our perception of it may improve over time, but what is true is true and that is that, period.  There are those who try to manipulate it or change it or pervert it, but as long as we keep going back to the Bible for our standards... no problem.  What standards?  The words Jesus said, the books Acts, Romans, Galatians.  Believe something religious?  Have book, chapter a verse for it?  If not, why not?  Be careful out there, there are as many lies as there are liars, so think.... Book, Chapter and Verse, again and again and again.  When you understand it all together, you won't need photo-shop for a second.  However, a good memory will help!!!

"ACTS OF THE APOSTLES" Chapter Nineteen by Mark Copeland