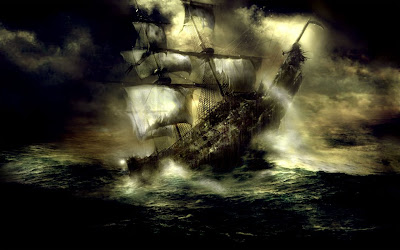 If I were on that ship I would be terrified!! Just the thought of drowning is unsettling. Still, the picture is interesting because it portrays what could happen in real life. Ships sink, people die. Harsh reality, but true. But what if a ship sinking was a "good thing"? Consider this passage from the book of Acts.
Act 27:9 When much time had passed and the voyage was now dangerous, because the Fast had now already gone by, Paul admonished them,
Act 27:10 and said to them, "Sirs, I perceive that the voyage will be with injury and much loss, not only of the cargo and the ship, but also of our lives."
Act 27:11 But the centurion gave more heed to the master and to the owner of the ship than to those things which were spoken by Paul.
Act 27:12 Because the haven was not suitable to winter in, the majority advised going to sea from there, if by any means they could reach Phoenix, and winter there, which is a port of Crete, looking northeast and southeast.
Act 27:13 When the south wind blew softly, supposing that they had obtained their purpose, they weighed anchor and sailed along Crete, close to shore.
Act 27:14 But before long, a stormy wind beat down from shore, which is called Euroclydon.
Act 27:15 When the ship was caught, and couldn't face the wind, we gave way to it, and were driven along.
Act 27:16 Running under the lee of a small island called Clauda, we were able, with difficulty, to secure the boat.
Act 27:17 After they had hoisted it up, they used cables to help reinforce the ship. Fearing that they would run aground on the Syrtis sand bars, they lowered the sea anchor, and so were driven along.
Act 27:18 As we labored exceedingly with the storm, the next day they began to throw things overboard.
Act 27:19 On the third day, they threw out the ship's tackle with their own hands.
Act 27:20 When neither sun nor stars shone on us for many days, and no small storm pressed on us, all hope that we would be saved was now taken away.
Act 27:21 When they had been long without food, Paul stood up in the middle of them, and said, "Sirs, you should have listened to me, and not have set sail from Crete, and have gotten this injury and loss.
Act 27:22 Now I exhort you to cheer up, for there will be no loss of life among you, but only of the ship.
Act 27:23 For there stood by me this night an angel, belonging to the God whose I am and whom I serve,
Act 27:24 saying, 'Don't be afraid, Paul. You must stand before Caesar. Behold, God has granted you all those who sail with you.'
Act 27:25 Therefore, sirs, cheer up! For I believe God, that it will be just as it has been spoken to me.
Act 27:26 But we must run aground on a certain island."
World English Bible
The bad news: This ship will sink. The good news: Your lives will be spared. Why, because an angel of God had told Paul so. They did escape and God used their situation to the betterment of the proclamation of the Gospel. God works like that; sometimes bad things happen to us in order that something greater can be accomplished. So, the next time something really, really bad happens in your life consider that it may be a stepping stone to something really wonderful!
Email ThisBlogThis!Share to TwitterShare to FacebookShare to Pinterest
Newer Posts Older Posts Home
Subscribe to: Posts (Atom)