Where is Pablo Picasso when you really need him??? 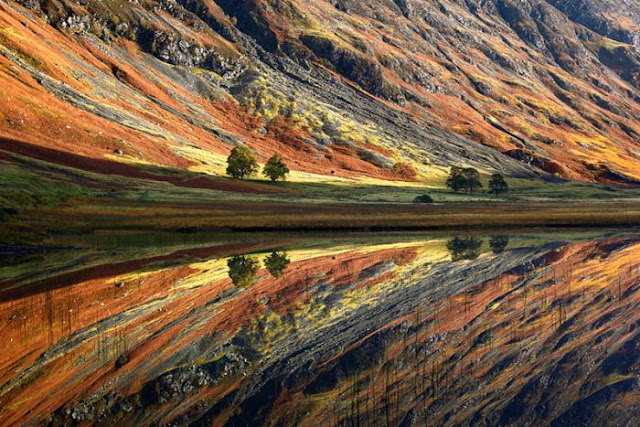 Its late and for some reason I can't sleep and so what better time to do a blog post.  As I looked through my collection of pictures, I kept staring at this one and oddly enough for the longest time I just could not tell what it was.  My first thought was that it was a painting of Pablo Picasso, but, no. Then I realized it was a reflection of a multi-colored hillside on a river nearby.  Regardless, it was one thing representing another and so vivid an image came to my mind that it made me remember this passage from the book of Ezekiel...

Jdg 21:1 Now the men of Israel had sworn in Mizpah, saying, There shall not any of us give his daughter to Benjamin as wife.
Jdg 21:2 The people came to Bethel, and sat there until evening before God, and lifted up their voices, and wept sore.
Jdg 21:3 They said, Yahweh, the God of Israel, why has this happened in Israel, that there should be today one tribe lacking in Israel?
Jdg 21:4 It happened on the next day that the people rose early, and built there an altar, and offered burnt offerings and peace offerings.
Jdg 21:5 The children of Israel said, Who is there among all the tribes of Israel who didn't come up in the assembly to Yahweh? For they had made a great oath concerning him who didn't come up to Yahweh to Mizpah, saying, He shall surely be put to death.
Jdg 21:6 The children of Israel grieved for Benjamin their brother, and said, There is one tribe cut off from Israel this day.
Jdg 21:7 How shall we do for wives for those who remain, seeing we have sworn by Yahweh that we will not give them of our daughters to wives?
Jdg 21:8 They said, What one is there of the tribes of Israel who didn't come up to Yahweh to Mizpah? Behold, there came none to the camp from Jabesh Gilead to the assembly.
Jdg 21:9 For when the people were numbered, behold, there were none of the inhabitants of Jabesh Gilead there.
Jdg 21:10 The congregation sent there twelve thousand men of the most valiant, and commanded them, saying, Go and strike the inhabitants of Jabesh Gilead with the edge of the sword, with the women and the little ones.
Jdg 21:11 This is the thing that you shall do: you shall utterly destroy every male, and every woman who has lain by man.
Jdg 21:12 They found among the inhabitants of Jabesh Gilead four hundred young virgins, who had not known man by lying with him; and they brought them to the camp to Shiloh, which is in the land of Canaan.
Jdg 21:13 The whole congregation sent and spoke to the children of Benjamin who were in the rock of Rimmon, and proclaimed peace to them.
Jdg 21:14 Benjamin returned at that time; and they gave them the women whom they had saved alive of the women of Jabesh Gilead: and yet so they weren't enough for them.
Jdg 21:15 The people grieved for Benjamin, because that Yahweh had made a breach in the tribes of Israel.
Jdg 21:16 Then the elders of the congregation said, How shall we do for wives for those who remain, seeing the women are destroyed out of Benjamin?
Jdg 21:17 They said, There must be an inheritance for those who are escaped of Benjamin, that a tribe not be blotted out from Israel.
Jdg 21:18 However we may not give them wives of our daughters, for the children of Israel had sworn, saying, Cursed be he who gives a wife to Benjamin.
Jdg 21:19 They said, Behold, there is a feast of Yahweh from year to year in Shiloh, which is on the north of Bethel, on the east side of the highway that goes up from Bethel to Shechem, and on the south of Lebonah.
Jdg 21:20 They commanded the children of Benjamin, saying, Go and lie in wait in the vineyards,
Jdg 21:21 and see, and behold, if the daughters of Shiloh come out to dance in the dances, then come out of the vineyards, and each man catch his wife of the daughters of Shiloh, and go to the land of Benjamin.
Jdg 21:22 It shall be, when their fathers or their brothers come to complain to us, that we will say to them, Grant them graciously to us, because we didn't take for each man his wife in battle, neither did you give them to them, else you would now be guilty.
Email ThisBlogThis!Share to TwitterShare to FacebookShare to Pinterest

Joh 9:1 As he passed by, he saw a man blind from birth.
Joh 9:2 His disciples asked him, "Rabbi, who sinned, this man or his parents, that he was born blind?"
Joh 9:3 Jesus answered, "Neither did this man sin, nor his parents; but, that the works of God might be revealed in him.
Joh 9:4 I must work the works of him who sent me, while it is day. The night is coming, when no one can work.
Joh 9:5 While I am in the world, I am the light of the world."
Joh 9:6 When he had said this, he spat on the ground, made mud with the saliva, anointed the blind man's eyes with the mud,
Joh 9:7 and said to him, "Go, wash in the pool of Siloam" (which means "Sent"). So he went away, washed, and came back seeing.
Joh 9:8 The neighbors therefore, and those who saw that he was blind before, said, "Isn't this he who sat and begged?"
Joh 9:9 Others were saying, "It is he." Still others were saying, "He looks like him." He said, "I am he."
Joh 9:10 They therefore were asking him, "How were your eyes opened?"
Joh 9:11 He answered, "A man called Jesus made mud, anointed my eyes, and said to me, 'Go to the pool of Siloam, and wash.' So I went away and washed, and I received sight."
Joh 9:12 Then they asked him, "Where is he?" He said, "I don't know."
Joh 9:13 They brought him who had been blind to the Pharisees.
Joh 9:14 It was a Sabbath when Jesus made the mud and opened his eyes.
Joh 9:15 Again therefore the Pharisees also asked him how he received his sight. He said to them, "He put mud on my eyes, I washed, and I see."
Joh 9:16 Some therefore of the Pharisees said, "This man is not from God, because he doesn't keep the Sabbath." Others said, "How can a man who is a sinner do such signs?" There was division among them.
Joh 9:17 Therefore they asked the blind man again, "What do you say about him, because he opened your eyes?" He said, "He is a prophet."
Joh 9:18 The Jews therefore did not believe concerning him, that he had been blind, and had received his sight, until they called the parents of him who had received his sight,
Joh 9:19 and asked them, "Is this your son, who you say was born blind? How then does he now see?"
Joh 9:20 His parents answered them, "We know that this is our son, and that he was born blind;
Joh 9:21 but how he now sees, we don't know; or who opened his eyes, we don't know. He is of age. Ask him. He will speak for himself."
Joh 9:22 His parents said these things because they feared the Jews; for the Jews had already agreed that if any man would confess him as Christ, he would be put out of the synagogue.
Joh 9:23 Therefore his parents said, "He is of age. Ask him."
Joh 9:24 So they called the man who was blind a second time, and said to him, "Give glory to God. We know that this man is a sinner."
Joh 9:25 He therefore answered, "I don't know if he is a sinner. One thing I do know: that though I was blind, now I see."
Joh 9:26 They said to him again, "What did he do to you? How did he open your eyes?"
Joh 9:27 He answered them, "I told you already, and you didn't listen. Why do you want to hear it again? You don't also want to become his disciples, do you?"
Joh 9:28 They insulted him and said, "You are his disciple, but we are disciples of Moses.
Joh 9:29 We know that God has spoken to Moses. But as for this man, we don't know where he comes from."
Joh 9:30 The man answered them, "How amazing! You don't know where he comes from, yet he opened my eyes.
Joh 9:31 We know that God doesn't listen to sinners, but if anyone is a worshipper of God, and does his will, he listens to him.
Joh 9:32 Since the world began it has never been heard of that anyone opened the eyes of someone born blind.
Joh 9:33 If this man were not from God, he could do nothing."
Joh 9:34 They answered him, "You were altogether born in sins, and do you teach us?" They threw him out.
Joh 9:35 Jesus heard that they had thrown him out, and finding him, he said, "Do you believe in the Son of God?"
Joh 9:36 He answered, "Who is he, Lord, that I may believe in him?"
Joh 9:37 Jesus said to him, "You have both seen him, and it is he who speaks with you."
Joh 9:38 He said, "Lord, I believe!" and he worshiped him.
Joh 9:39 Jesus said, "I came into this world for judgment, that those who don't see may see; and that those who see may become blind."
Joh 9:40 Those of the Pharisees who were with him heard these things, and said to him, "Are we also blind?"
Joh 9:41 Jesus said to them, "If you were blind, you would have no sin; but now you say, 'We see.' Therefore your sin remains.

"ACTS OF THE APOSTLES" Chapter Fifteen