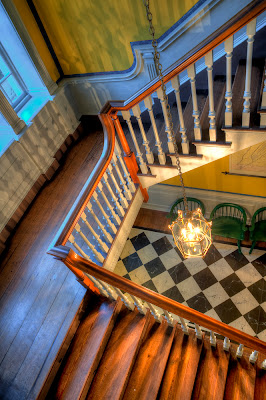 This picture reminds me of the staircases that were in my Great-Aunt's brownstones in Boston.  They were old, but you tell that at one time people of great wealth had owned them.  Whenever I was in Boston, inspecting her property was a priority, so I spent a lot of time going up and down stairs like these.  Naturally, they reminded me of two passages in the Scriptures and here they are...
WEB: Genesis Chapter 28

[10] Jacob went out from Beersheba, and went toward Haran. [11] He came to a certain place, and stayed there all night, because the sun had set. He took one of the stones of the place, and put it under his head, and lay down in that place to sleep. [12] He dreamed. Behold, a stairway set upon the earth, and its top reached to heaven. Behold, the angels of God ascending and descending on it. [13] Behold, Yahweh stood above it, and said, “I am Yahweh, the God of Abraham your father, and the God of Isaac. The land whereon you lie, to you will I give it, and to your seed. [14] Your seed will be as the dust of the earth, and you will spread abroad to the west, and to the east, and to the north, and to the south. In you and in your seed will all the families of the earth be blessed. [15] Behold, I am with you, and will keep you, wherever you go, and will bring you again into this land. For I will not leave you, until I have done that which I have spoken of to you.”

[16] Jacob awakened out of his sleep, and he said, “Surely Yahweh is in this place, and I didn’t know it.” [17] He was afraid, and said, “How dreadful is this place! This is none other than God’s house, and this is the gate of heaven.”
WEB: John Chapter 1

[43] On the next day, he was determined to go out into Galilee, and he found Philip. Jesus said to him, "“Follow me.”" [44] Now Philip was from Bethsaida, of the city of Andrew and Peter. [45] Philip found Nathanael, and said to him, “We have found him, of whom Moses in the law, and the prophets, wrote: Jesus of Nazareth, the son of Joseph.”

[46] Nathanael said to him, “Can any good thing come out of Nazareth?”

Philip said to him, “Come and see.”

[47] Jesus saw Nathanael coming to him, and said about him, "“Behold, an Israelite indeed, in whom is no deceit!”"

Jesus answered him, "“Before Philip called you, when you were under the fig tree, I saw you.”"

[49] Nathanael answered him, “Rabbi, you are the Son of God! You are King of Israel!”

[50] Jesus answered him, "“Because I told you, ‘I saw you underneath the fig tree,’ do you believe? You will see greater things than these!”" [51] He said to him, "“Most certainly, I tell you, hereafter you will see heaven opened, and the angels of God ascending and descending on the Son of Man.”"
Jacob and Philip were two very different individuals.  They did have something in common, though... they had an encounter with God.  He showed them the way to heaven and I can't really imagine a better thing to know about.  The more I think about it, stairs will never be the same again!!!
Email ThisBlogThis!Share to TwitterShare to FacebookShare to Pinterest


Heb 13:1 Let brotherly love continue.
Heb 13:2 Don't forget to show hospitality to strangers, for in doing so, some have entertained angels without knowing it.
Heb 13:3 Remember those who are in bonds, as bound with them; and those who are ill-treated, since you are also in the body.
Heb 13:4 Let marriage be held in honor among all, and let the bed be undefiled: but God will judge the sexually immoral and adulterers.
Heb 13:5 Be free from the love of money, content with such things as you have, for he has said, "I will in no way leave you, neither will I in any way forsake you."
Heb 13:6 So that with good courage we say, "The Lord is my helper. I will not fear. What can man do to me?"
Heb 13:7 Remember your leaders, men who spoke to you the word of God, and considering the results of their conduct, imitate their faith.
Heb 13:8 Jesus Christ is the same yesterday, today, and forever.
Heb 13:9 Don't be carried away by various and strange teachings, for it is good that the heart be established by grace, not by food, through which those who were so occupied were not benefited.
Heb 13:10 We have an altar from which those who serve the holy tabernacle have no right to eat.
Heb 13:11 For the bodies of those animals, whose blood is brought into the holy place by the high priest as an offering for sin, are burned outside of the camp.
Heb 13:12 Therefore Jesus also, that he might sanctify the people through his own blood, suffered outside of the gate.
Heb 13:13 Let us therefore go out to him outside of the camp, bearing his reproach.
Heb 13:14 For we don't have here an enduring city, but we seek that which is to come.
Heb 13:15 Through him, then, let us offer up a sacrifice of praise to God continually, that is, the fruit of lips which proclaim allegiance to his name.
Heb 13:16 But don't forget to be doing good and sharing, for with such sacrifices God is well pleased.
Heb 13:17 Obey your leaders and submit to them, for they watch on behalf of your souls, as those who will give account, that they may do this with joy, and not with groaning, for that would be unprofitable for you.
Heb 13:18 Pray for us, for we are persuaded that we have a good conscience, desiring to live honorably in all things.
Heb 13:19 I strongly urge you to do this, that I may be restored to you sooner.
Heb 13:20 Now may the God of peace, who brought again from the dead the great shepherd of the sheep with the blood of an eternal covenant, our Lord Jesus,
Heb 13:21 make you complete in every good work to do his will, working in you that which is well pleasing in his sight, through Jesus Christ, to whom be the glory forever and ever. Amen.
Heb 13:22 But I exhort you, brothers, endure the word of exhortation, for I have written to you in few words.
Heb 13:23 Know that our brother Timothy has been freed, with whom, if he comes shortly, I will see you.
Heb 13:24 Greet all of your leaders and all the saints. The Italians greet you.
Heb 13:25 Grace be with you all. Amen.
Email ThisBlogThis!Share to TwitterShare to FacebookShare to Pinterest

Prove yourself a man, by Mark Copeland