Yours means yours and not MINE! 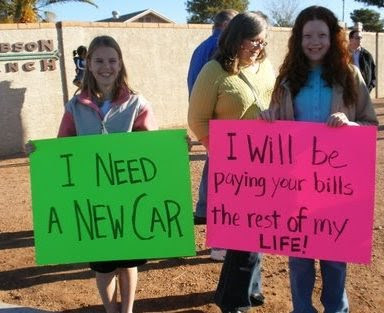 Today, it is fashionable to expect the GOVERNMENT to give you the things you want or need. Couple this with one very large trend of lack of personal responsibility and you have a disaster waiting to happen. Something for nothing has become the mantra of our government. This is not only unfair to those who have to work for what they have, but if just about everyone does it, society as we know it is doomed. There was a similar problem in New Testament times and the Apostle Paul writes to the Thessalonians about it.
2 Thess 3:6-12
6 Now we command you, brothers, in the name of our Lord Jesus Christ, that you withdraw yourselves from every brother who walks in rebellion, and not after the tradition which they received from us.
7 For you know how you ought to imitate us. For we didn't behave ourselves rebelliously among you,
8 neither did we eat bread from anyone's hand without paying for it, but in labor and travail worked night and day, that we might not burden any of you;
9 not because we don't have the right, but to make ourselves an example to you, that you should imitate us.
10 For even when we were with you, we commanded you this: "If anyone will not work, neither let him eat."
11 For we hear of some who walk among you in rebellion, who don't work at all, but are busybodies.
12 Now those who are that way, we command and exhort in the Lord Jesus Christ, that with quietness they work, and eat their own bread. WEB
Please note that refusal to work is characterized as rebellion. Strong words given further emphasis by the Apostle who worked for a living. Paul made tents and served the God of Heaven on his own time. He had every right to expect monetary help for his efforts to spread the Gospel, but he gave up that right so that his message might carry more weight to his listeners. If you claim to follow Christ....work. There are jobs out there; you may not like them, but they are there. Otherwise, why are so many aliens coming into the USA from Mexico? Think this is a hard stance? Well, reread the passage again; it is very plain. As far as the picture above goes, well, I don't mind paying my own bills, I just think its wrong for someone else to expect me to pay theirs.
Email ThisBlogThis!Share to TwitterShare to FacebookShare to Pinterest
Newer Posts Older Posts Home
Subscribe to: Posts (Atom)