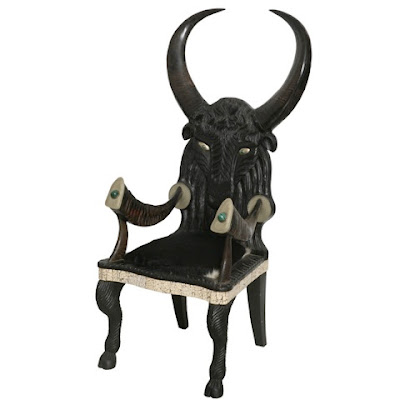 If Satan had a throne, what would it look like? Who knows, but this picture just might fill the bill. Why? Because Satan was (and still is) on a power trip (as shown by the horns). The color is right, since God is light, naturally Satan would be black. Since God is love, Satan would naturally be hate. God has exalted man, so Satan would naturally do the opposite and exalt the animal world. In short, whatever God is, wants, desires or works at, Satan wants the exact opposite. This passage from revelation will prove interesting.
Rev 2:12-17
12 "To the angel of the assembly in Pergamum write: "He who has the sharp two-edged sword says these things:
13 "I know your works and where you dwell, where Satan's throne is. You hold firmly to my name, and didn't deny my faith in the days of Antipas my witness, my faithful one, who was killed among you, where Satan dwells.
14 But I have a few things against you, because you have there some who hold the teaching of Balaam, who taught Balak to throw a stumbling block before the children of Israel, to eat things sacrificed to idols, and to commit sexual immorality.
15 So you also have some who hold to the teaching of the Nicolaitans likewise .
16 Repent therefore, or else I am coming to you quickly, and I will make war against them with the sword of my mouth.
17 He who has an ear, let him hear what the Spirit says to the assemblies. To him who overcomes, to him I will give of the hidden manna, and I will give him a white stone, and on the stone a new name written, which no one knows but he who receives it.WEB
One of Satan's best "tricks" is to get the unwitting human to accept something "more" in the way of deity and his best method is to use sex along with this. Fortunately, we have Jesus, who has both shown us the way and helps us become and remain Spiritual. To those who "overcome" Satan and his ways, God will give him 1. hidden manna 2. a white stone 3. a new name. In other words, Spiritual sustenance, freedom and a new life. What more could someone ever want? After all, it is better to bow in heaven rather than sit on a throne in hell! I don't know about you, but I am going to watch where I sit from now on and besides, BLACK MAKES ME NERVOUS!!
Email ThisBlogThis!Share to TwitterShare to FacebookShare to Pinterest

A face to remember 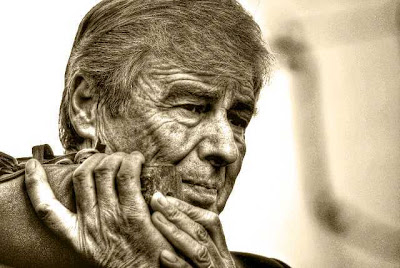 If you look at this man's face for awhile, you may see what I do; someone who has worked hard all his life, someone who has paid his dues. Age is catching up with him; the wrinkles are all there, but there is something about the man's eyes that speaks the firmness of his resolve. He is definitely someone you should take seriously. God is like that too, when he says something, you should pay attention and really do what he says to do. This passage from the book of Genesis is an example.
Gen 3:17-19
17 To Adam he said, "Because you have listened to your wife's voice, and have eaten of the tree, of which I commanded you, saying, 'You shall not eat of it,' cursed is the ground for your sake. In toil you will eat of it all the days of your life.
18 Thorns also and thistles will it bring forth to you; and you will eat the herb of the field.
19 By the sweat of your face will you eat bread until you return to the ground, for out of it you were taken. For you are dust, and to dust you shall return."WEB
The results of Adam's disobedience are still with us; life can be very hard indeed. But difficult times can also have the effect of making us stronger, more capable of handling any situation that may come our way. This is what I think of when I look at the man in the picture; someone who can take care of himself. Just think how much easier life would be if he really knew Jesus; I believe that too would be visible on his face. Tomorrow, first thing in the morning, when you brush your teeth, ask yourself: "What is written on my face"? The answer might surprise you.
Email ThisBlogThis!Share to TwitterShare to FacebookShare to Pinterest
Newer Posts Older Posts Home
Subscribe to: Posts (Atom)