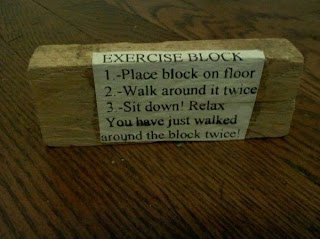 I was sick for a few weeks and haven't been doing my walks with Linda.  Today, we started walking again and although it was humid, we did the normal two blocks, so when I saw this picture, naturally it caught my eye.  Sometimes its hard to walk, sometimes not, but its always worth it.  That is what I keep telling myself anyway.  It would be easy to walk around the block in the picture, but it probably wouldn't do any good.  Facing the reality of that is something we all should do; the Corinthians did...
WEB: I Corinthians Chapter 6
[9] Or don’t you know that the unrighteous will not inherit the Kingdom of God? Don’t be deceived. Neither the sexually immoral, nor idolaters, nor adulterers, nor male prostitutes, nor homosexuals, [10] nor thieves, nor covetous, nor drunkards, nor slanderers, nor extortioners, will inherit the Kingdom of God. [11] Such were some of you, but you were washed. But you were sanctified. But you were justified in the name of the Lord Jesus, and in the Spirit of our God.
Today, we call sin by other names; somehow, by changing the name for what we do wrong seems to remove the consequences for our actions.  But, the thing is... it really doesn't.  We may call adultery "an affair" or homosexuality "gay" or living in sin "cohabitation" but they are what they are and there will be a price to pay.  There always is; no matter what the sin may be. Paul told the Corinthians what they had been, in no uncertain terms and what God had done for them in equally descriptive terms.  How God had cleansed them from their sins and made them sanctified (set apart for holy purposes).  Walking around an "exercise block" on the floor is not the same as taking a real walk around the block and never will be.  No matter what society may label sin today, it is still sin and the sooner that is realized, the better.
Email ThisBlogThis!Share to TwitterShare to FacebookShare to Pinterest


Gen 49:1 Jacob called to his sons, and said: "Gather yourselves together, that I may tell you that which will happen to you in the days to come.
Gen 49:2 Assemble yourselves, and hear, you sons of Jacob. Listen to Israel, your father.
Gen 49:3 "Reuben, you are my firstborn, my might, and the beginning of my strength; excelling in dignity, and excelling in power.
Gen 49:4 Boiling over as water, you shall not excel; because you went up to your father's bed, then defiled it. He went up to my couch.
Gen 49:5 "Simeon and Levi are brothers. Their swords are weapons of violence.
Gen 49:6 My soul, don't come into their council. My glory, don't be united to their assembly; for in their anger they killed men. In their self-will they hamstrung cattle.
Gen 49:7 Cursed be their anger, for it was fierce; and their wrath, for it was cruel. I will divide them in Jacob, and scatter them in Israel.
Gen 49:8 "Judah, your brothers will praise you. Your hand will be on the neck of your enemies. Your father's sons will bow down before you.
Gen 49:9 Judah is a lion's cub. From the prey, my son, you have gone up. He stooped down, he crouched as a lion, as a lioness. Who will rouse him up?
Gen 49:10 The scepter will not depart from Judah, nor the ruler's staff from between his feet, until he comes to whom it belongs. To him will the obedience of the peoples be.
Gen 49:11 Binding his foal to the vine, his donkey's colt to the choice vine; he has washed his garments in wine, his robes in the blood of grapes.
Gen 49:12 His eyes will be red with wine, his teeth white with milk.
Gen 49:13 "Zebulun will dwell at the haven of the sea. He will be for a haven of ships. His border will be on Sidon.
Gen 49:14 "Issachar is a strong donkey, lying down between the saddlebags.
Gen 49:15 He saw a resting place, that it was good, the land, that it was pleasant. He bows his shoulder to the burden, and becomes a servant doing forced labor.
Gen 49:16 "Dan will judge his people, as one of the tribes of Israel.
Gen 49:17 Dan will be a serpent in the way, an adder in the path, That bites the horse's heels, so that his rider falls backward.
Gen 49:18 I have waited for your salvation, Yahweh.
Gen 49:19 "A troop will press on Gad, but he will press on their heel.
Gen 49:20 "Asher's food will be rich. He will yield royal dainties.
Gen 49:21 "Naphtali is a doe set free, who bears beautiful fawns.
Gen 49:22 "Joseph is a fruitful vine, a fruitful vine by a spring. His branches run over the wall.
Gen 49:23 The archers have sorely grieved him, shot at him, and persecute him:
Gen 49:24 But his bow remained strong. The arms of his hands were made strong, by the hands of the Mighty One of Jacob, (from there is the shepherd, the stone of Israel),
Gen 49:25 even by the God of your father, who will help you; by the Almighty, who will bless you, with blessings of heaven above, blessings of the deep that lies below, blessings of the breasts, and of the womb.
Gen 49:26 The blessings of your father have prevailed above the blessings of your ancestors, above the boundaries of the ancient hills. They will be on the head of Joseph, on the crown of the head of him who is separated from his brothers.
Gen 49:27 "Benjamin is a ravenous wolf. In the morning he will devour the prey. At evening he will divide the spoil."
Gen 49:28 All these are the twelve tribes of Israel, and this is what their father spoke to them and blessed them. He blessed everyone according to his blessing.
Gen 49:29 He instructed them, and said to them, "I am to be gathered to my people. Bury me with my fathers in the cave that is in the field of Ephron the Hittite,
Gen 49:30 in the cave that is in the field of Machpelah, which is before Mamre, in the land of Canaan, which Abraham bought with the field from Ephron the Hittite as a burial place.
Gen 49:31 There they buried Abraham and Sarah, his wife. There they buried Isaac and Rebekah, his wife, and there I buried Leah:
Gen 49:32 the field and the cave that is therein, which was purchased from the children of Heth."
Gen 49:33 When Jacob made an end of charging his sons, he gathered up his feet into the bed, and yielded up the spirit, and was gathered to his people.

"THE BOOK OF JOB" The Great Debate: Second Cycle Of Speeches (15-21) by Mark Copeland