Right before your eyes 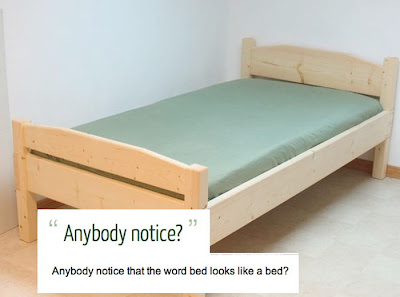 If bed were a little bit more square  (bEd), the bed might be a bit more comfortable.  Whoever noticed the similarity of the word to the object is very observant!  Sometimes things are right in front of you and you just don't see them; take this verse from the book of Mark for example....

Mark, Chapter 16
15 He said to them, "“Go into all the world, and preach the Good News to the whole creation.  16 He who believes and is baptized will be saved; but he who disbelieves will be condemned.

Jesus is speaking: To paraphrase; he says to go everywhere and proclaim the Good News (the Gospel) to everyone.  Most people have no problem with this, but the next verse gives some people problems.  My breakdown goes like this: He who believes + baptized = saved.  He who disbelieves ( - baptized ) = condemned.  The person who has concrete confidence in the Good News of Jesus and passively submits to being baptized is saved.  The person whose belief has no concrete confidence does not really believe enough to submit to God's will and obey the command to be baptized and therefore is condemned by their lack of true faith.  From past experience, I know that some out there will think this harsh or legalistic, but truthfully, it is not.  Consider this passage from the book of James:

James, Chapter 2
19 You believe that God is one. You do well. The demons also believe, and shudder.

I have never heard of anyone who says that a demon will be in heaven. So, just believing in God isn't enough.  If that weren't enough to state the obvious, consider the following passages...

Acts, chapter 2
38 Peter said to them, “Repent, and be baptized, every one of you, in the name of Jesus Christ for the forgiveness of sins, and you will receive the gift of the Holy Spirit.

Titus, Chapter 3
4 But when the kindness of God our Savior and his love toward mankind appeared,  5 not by works of righteousness, which we did ourselves, but according to his mercy, he saved us, through the washing of regeneration and renewing by the Holy Spirit, 6 whom he poured out on us richly, through Jesus Christ our Savior; 7 that, being justified by his grace, we might be made heirs according to the hope of eternal life.

Romans, Chapter 6
1 What shall we say then? Shall we continue in sin, that grace may abound?  2 May it never be! We who died to sin, how could we live in it any longer?  3 Or don’t you know that all we who were baptized into Christ Jesus were baptized into his death?  4 We were buried therefore with him through baptism to death, that just like Christ was raised from the dead through the glory of the Father, so we also might walk in newness of life.  5 For if we have become united with him in the likeness of his death, we will also be part of his resurrection; 6 knowing this, that our old man was crucified with him, that the body of sin might be done away with, so that we would no longer be in bondage to sin.  7 For he who has died has been freed from sin.  8 But if we died with Christ, we believe that we will also live with him; 9 knowing that Christ, being raised from the dead, dies no more. Death no more has dominion over him!  10 For the death that he died, he died to sin one time; but the life that he lives, he lives to God.  11 Thus consider yourselves also to be dead to sin, but alive to God in Christ Jesus our Lord.

The reason for baptism is simple... to get rid of sins.  When your hands are dirty, what do you do?  You wash them of course!  Why, to get rid of your dirt problem. You have to the desire to want to get rid of the dirt and then actually wash.  Sin is really no different.  Simply put, belief in Jesus (true, obedient faith) when coupled with baptism washes your sins away. Belief+baptism=salvation.  Read it again and believe it, because its true.  After awhile you will wonder how you could ever see it any other way....

"THE FIRST EPISTLE TO THE CORINTHIANS" Chapter Nine by Mark Copeland