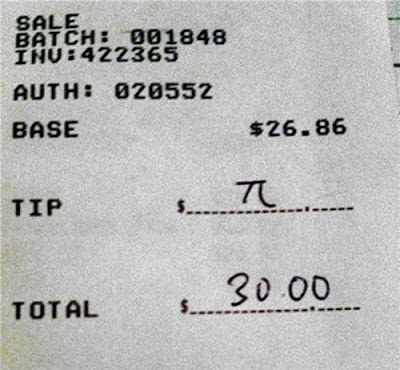 I can just picture the restaurant server looking at this receipt and wondering: "Who is this person"?  Perhaps its one of the cast members of "The Big Bang" or maybe a math teacher or one of the millions of very unusal people out there.  Who knows?  There is nothing wrong with being "intelligent", as long as you don't put others down.  Some people who are blessed with an above average mind can be sensible and very reasonable human beings.  Here is an example of this...
WEB: Acts Chapter 13
[4] So, being sent out by the Holy Spirit, they went down to Seleucia. From there they sailed to Cyprus. [5] When they were at Salamis, they proclaimed the word of God in the Jewish synagogues. They had also John as their attendant. [6] When they had gone through the island to Paphos, they found a certain sorcerer, a false prophet, a Jew, whose name was Bar Jesus, [7] who was with the proconsul, Sergius Paulus, a man of understanding. This man summoned Barnabas and Saul, and sought to hear the word of God. [8] But Elymas the sorcerer (for so is his name by interpretation) withstood them, seeking to turn aside the proconsul from the faith. [9] But Saul, who is also called Paul, filled with the Holy Spirit, fastened his eyes on him, [10] and said, “Full of all deceit and all cunning, you son of the devil, you enemy of all righteousness, will you not cease to pervert the right ways of the Lord? [11] Now, behold, the hand of the Lord is on you, and you will be blind, not seeing the sun for a season!”

Immediately a mist and darkness fell on him. He went around seeking someone to lead him by the hand. [12] Then the proconsul, when he saw what was done, believed, being astonished at the teaching of the Lord.
A procounsul was a "somebody"!  He had real power and authority in the Roman world.  He both heard the teaching and saw the miracle and believed.  He used his intelligence wisely.  Christianity is for the learned as well as the uneducated.  If there is any doubt in your mind, read the book of Romans; its like reading a book about logic.  The tip in the picture is a numerical symbol for 3.14 (rounded), but personally, I prefer to think about a real pie myself (and not a pie-in-the-face, either).  Life should not be over analyzed, just accepted. Humm, isn't that exactly what Sergius Paulus did?
Email ThisBlogThis!Share to TwitterShare to FacebookShare to Pinterest


2Th 3:1 Finally, brothers, pray for us, that the word of the Lord may spread rapidly and be glorified, even as also with you;
2Th 3:2 and that we may be delivered from unreasonable and evil men; for not all have faith.
2Th 3:3 But the Lord is faithful, who will establish you, and guard you from the evil one.
2Th 3:4 We have confidence in the Lord concerning you, that you both do and will do the things we command.
2Th 3:5 May the Lord direct your hearts into the love of God, and into the patience of Christ.
2Th 3:6 Now we command you, brothers, in the name of our Lord Jesus Christ, that you withdraw yourselves from every brother who walks in rebellion, and not after the tradition which they received from us.
2Th 3:7 For you know how you ought to imitate us. For we didn't behave ourselves rebelliously among you,
2Th 3:8 neither did we eat bread from anyone's hand without paying for it, but in labor and travail worked night and day, that we might not burden any of you;
2Th 3:9 not because we don't have the right, but to make ourselves an example to you, that you should imitate us.
2Th 3:10 For even when we were with you, we commanded you this: "If anyone will not work, neither let him eat."
2Th 3:11 For we hear of some who walk among you in rebellion, who don't work at all, but are busybodies.
2Th 3:12 Now those who are that way, we command and exhort in the Lord Jesus Christ, that with quietness they work, and eat their own bread.
2Th 3:13 But you, brothers, don't be weary in doing well.
2Th 3:14 If any man doesn't obey our word in this letter, note that man, that you have no company with him, to the end that he may be ashamed.
2Th 3:15 Don't count him as an enemy, but admonish him as a brother.
2Th 3:16 Now may the Lord of peace himself give you peace at all times in all ways. The Lord be with you all.
2Th 3:17 The greeting of me, Paul, with my own hand, which is the sign in every letter: this is how I write.
2Th 3:18 The grace of our Lord Jesus Christ be with you all. Amen.