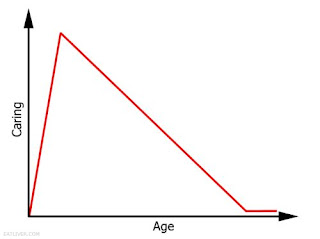 This graph is a lie!!!  While it is true that advanced age changes some things, caring is not one of them.  Its just that there is more to love; more grandchildren, more friends and acquaintances. Even though you have more time to yourself (assuming that you did in fact retire), yet more people in your life means more to do.  This did not originate with me, for read what the apostle Paul says...

The Book Philemon
1 Paul, a prisoner of Christ Jesus, and Timothy our brother, to Philemon, our beloved fellow worker,  2 to the beloved Apphia, to Archippus, our fellow soldier, and to the assembly in your house: 3 Grace to you and peace from God our Father and the Lord Jesus Christ.  4 I thank my God always, making mention of you in my prayers,  5 hearing of your love, and of the faith which you have toward the Lord Jesus, and toward all the saints;  6 that the fellowship of your faith may become effective, in the knowledge of every good thing which is in us in Christ Jesus.  7 For we have much joy and comfort in your love, because the hearts of the saints have been refreshed through you, brother.  8 Therefore, though I have all boldness in Christ to command you that which is appropriate,  9 yet for love’s sake I rather beg, being such a one as Paul, the aged, but also a prisoner of Jesus Christ.  10 I beg you for my child, whom I have become the father of in my chains, Onesimus,  11 who once was useless to you, but now is useful to you and to me. 12 I am sending him back. Therefore receive him, that is, my own heart, 13 whom I desired to keep with me, that on your behalf he might serve me in my chains for the Good News.  14 But I was willing to do nothing without your consent, that your goodness would not be as of necessity, but of free will.  15 For perhaps he was therefore separated from you for a while, that you would have him forever,  16 no longer as a slave, but more than a slave, a beloved brother, especially to me, but how much rather to you, both in the flesh and in the Lord.  17 If then you count me a partner, receive him as you would receive me. 18 But if he has wronged you at all, or owes you anything, put that to my account.  19 I, Paul, write this with my own hand: I will repay it (not to mention to you that you owe to me even your own self besides).

Onesimus was a runaway slave.  This was a crime and punishable by death.  However, he became a Christian and its obvious that Paul loved him.  Loved him enough to assume the debt of whatever he had done BEFORE Onesimus had begun to follow Jesus.  Paul's letter to Philemon (who was Onesimus' owner) is a touching statement about the depth of feeling an older person can possess.  I am very happy to say that most everyone I know who is advanced in years cares about others.  Years have a way of teaching us how to love... believe it, because its true.

1Sa 27:1 David said in his heart, I shall now perish one day by the hand of Saul: there is nothing better for me than that I should escape into the land of the Philistines; and Saul will despair of me, to seek me any more in all the borders of Israel: so shall I escape out of his hand.
1Sa 27:2 David arose, and passed over, he and the six hundred men who were with him, to Achish the son of Maoch, king of Gath.
1Sa 27:3 David lived with Achish at Gath, he and his men, every man with his household, even David with his two wives, Ahinoam the Jezreelitess, and Abigail the Carmelitess, Nabal's wife.
1Sa 27:4 It was told Saul that David was fled to Gath: and he sought no more again for him.
1Sa 27:5 David said to Achish, If now I have found favor in your eyes, let them give me a place in one of the cities in the country, that I may dwell there: for why should your servant dwell in the royal city with you?
1Sa 27:6 Then Achish gave him Ziklag that day: why Ziklag pertains to the kings of Judah to this day.
1Sa 27:7 The number of the days that David lived in the country of the Philistines was a full year and four months.
1Sa 27:8 David and his men went up, and made a raid on the Geshurites, and the Girzites, and the Amalekites; for those nations were the inhabitants of the land, who were of old, as you go to Shur, even to the land of Egypt.
1Sa 27:9 David struck the land, and saved neither man nor woman alive, and took away the sheep, and the cattle, and the donkeys, and the camels, and the clothing; and he returned, and came to Achish.
1Sa 27:10 Achish said, Against whom have you made a raid today? David said, Against the South of Judah, and against the South of the Jerahmeelites, and against the South of the Kenites.
1Sa 27:11 David saved neither man nor woman alive, to bring them to Gath, saying, Lest they should tell of us, saying, So did David, and so has been his manner all the while he has lived in the country of the Philistines.
1Sa 27:12 Achish believed David, saying, He has made his people Israel utterly to abhor him; therefore he shall be my servant forever.

1Sa 28:1 It happened in those days, that the Philistines gathered their armies together for warfare, to fight with Israel. Achish said to David, Know assuredly that you shall go out with me in the army, you and your men.
1Sa 28:2 David said to Achish, Therefore you shall know what your servant will do. Achish said to David, Therefore will I make you keeper of my head for ever.
1Sa 28:3 Now Samuel was dead, and all Israel had lamented him, and buried him in Ramah, even in his own city. Saul had put away those who had familiar spirits, and the wizards, out of the land.
1Sa 28:4 The Philistines gathered themselves together, and came and encamped in Shunem: and Saul gathered all Israel together, and they encamped in Gilboa.
1Sa 28:5 When Saul saw the army of the Philistines, he was afraid, and his heart trembled greatly.
1Sa 28:6 When Saul inquired of Yahweh, Yahweh didn't answer him, neither by dreams, nor by Urim, nor by prophets.
1Sa 28:7 Then said Saul to his servants, Seek me a woman who has a familiar spirit, that I may go to her, and inquire of her. His servants said to him, Behold, there is a woman who has a familiar spirit at Endor.
1Sa 28:8 Saul disguised himself, and put on other clothing, and went, he and two men with him, and they came to the woman by night: and he said, Please divine to me by the familiar spirit, and bring me up whoever I shall name to you.
1Sa 28:9 The woman said to him, Behold, you know what Saul has done, how he has cut off those who have familiar spirits, and the wizards, out of the land: why then do you lay a snare for my life, to cause me to die?
1Sa 28:10 Saul swore to her by Yahweh, saying, As Yahweh lives, there shall no punishment happen to you for this thing.
1Sa 28:11 Then said the woman, Whom shall I bring up to you? He said, Bring me up Samuel.
1Sa 28:12 When the woman saw Samuel, she cried with a loud voice; and the woman spoke to Saul, saying, Why have you deceived me? for you are Saul.
1Sa 28:13 The king said to her, Don't be afraid: for what do you see? The woman said to Saul, I see a god coming up out of the earth.
1Sa 28:14 He said to her, What form is he of? She said, An old man comes up; and he is covered with a robe. Saul perceived that it was Samuel, and he bowed with his face to the ground, and did obeisance.
1Sa 28:15 Samuel said to Saul, Why have you disquieted me, to bring me up? Saul answered, I am sore distressed; for the Philistines make war against me, and God is departed from me, and answers me no more, neither by prophets, nor by dreams: therefore I have called you, that you may make known to me what I shall do.
1Sa 28:16 Samuel said, Why then do you ask of me, seeing Yahweh has departed from you, and has become your adversary?
1Sa 28:17 Yahweh has done to you as he spoke by me: and Yahweh has torn the kingdom out of your hand, and given it to your neighbor, even to David.
1Sa 28:18 Because you didn't obey the voice of Yahweh, and didn't execute his fierce wrath on Amalek, therefore Yahweh has done this thing to you this day.
1Sa 28:19 Moreover Yahweh will deliver Israel also with you into the hand of the Philistines; and tomorrow you and your sons will be with me: Yahweh will deliver the army of Israel also into the hand of the Philistines.
1Sa 28:20 Then Saul fell immediately his full length on the earth, and was sore afraid, because of the words of Samuel: and there was no strength in him; for he had eaten no bread all the day, nor all the night.
1Sa 28:21 The woman came to Saul, and saw that he was sore troubled, and said to him, Behold, your handmaid has listened to your voice, and I have put my life in my hand, and have listened to your words which you spoke to me.
1Sa 28:22 Now therefore, please listen also to the voice of your handmaid, and let me set a morsel of bread before you; and eat, that you may have strength, when you go on your way.
1Sa 28:23 But he refused, and said, I will not eat. But his servants, together with the woman, constrained him; and he listened to their voice. So he arose from the earth, and sat on the bed.
1Sa 28:24 The woman had a fattened calf in the house; and she hurried, and killed it; and she took flour, and kneaded it, and did bake unleavened bread of it:
1Sa 28:25 and she brought it before Saul, and before his servants; and they ate. Then they rose up, and went away that night.
Email ThisBlogThis!Share to TwitterShare to FacebookShare to Pinterest

"THE EPISTLE TO THE ROMANS" Chapter Two by Mark Copeland