Rev 4:1 After these things I looked and saw a door opened in heaven, and the first voice that I heard, like a trumpet speaking with me, was one saying, "Come up here, and I will show you the things which must happen after this."
Rev 4:2 Immediately I was in the Spirit. Behold, there was a throne set in heaven, and one sitting on the throne
Rev 4:3 that looked like a jasper stone and a sardius. There was a rainbow around the throne, like an emerald to look at.
Rev 4:4 Around the throne were twenty-four thrones. On the thrones were twenty-four elders sitting, dressed in white garments, with crowns of gold on their heads.
Rev 4:5 Out of the throne proceed lightnings, sounds, and thunders. There were seven lamps of fire burning before his throne, which are the seven Spirits of God.
Rev 4:6 Before the throne was something like a sea of glass, similar to crystal. In the midst of the throne, and around the throne were four living creatures full of eyes before and behind.
Rev 4:7 The first creature was like a lion, and the second creature like a calf, and the third creature had a face like a man, and the fourth was like a flying eagle.
Rev 4:8 The four living creatures, each one of them having six wings, are full of eyes around and within. They have no rest day and night, saying, "Holy, holy, holy is the Lord God, the Almighty, who was and who is and who is to come!"
Rev 4:9 When the living creatures give glory, honor, and thanks to him who sits on the throne, to him who lives forever and ever,
Rev 4:10 the twenty-four elders fall down before him who sits on the throne, and worship him who lives forever and ever, and throw their crowns before the throne, saying,
Rev 4:11 "Worthy are you, our Lord and God, the Holy One, to receive the glory, the honor, and the power, for you created all things, and because of your desire they existed, and were created!"
Email ThisBlogThis!Share to TwitterShare to FacebookShare to Pinterest

What does the LORD require of you by Mark Copeland

http://executableoutlines.com/text/mic6_6.htm
One of my favorite passages from the book of Micah... Gary
Email ThisBlogThis!Share to TwitterShare to FacebookShare to Pinterest 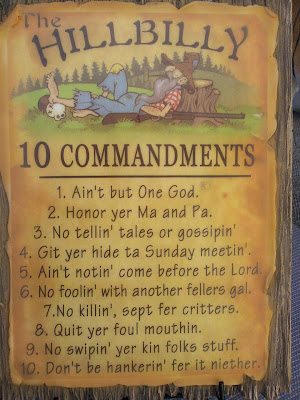 The Ten Commandments; two days in a row?  But, when I saw this today, I couldn't resist.  Okay, this list isn't in the identical order and doesn't have all the same concepts, but I like it anyway.  Just think about it for awhile and then read where it comes from...
WEB: Deuteronomy Chapter 5

[6] “I am Yahweh your God, who brought you out of the land of Egypt, out of the house of bondage.

[7] “You shall have no other gods before me.

[8] “You shall not make an engraved image for yourself, any likeness of what is in heaven above, or what is in the earth beneath, or that is in the water under the earth: [9] you shall not bow down yourself to them, nor serve them; for I, Yahweh, your God, am a jealous God, visiting the iniquity of the fathers on the children, and on the third and on the fourth generation of those who hate me; [10] and showing loving kindness to thousands of those who love me and keep my commandments.

[11] “You shall not take the name of Yahweh your God in vain: for Yahweh will not hold him guiltless who takes his name in vain.

[16] “Honor your father and your mother, as Yahweh your God commanded you; that your days may be long, and that it may go well with you, in the land which Yahweh your God gives you.

[18] “Neither shall you commit adultery.

[20] “Neither shall you give false testimony against your neighbor.

[21] “Neither shall you covet your neighbor’s wife; neither shall you desire your neighbor’s house, his field, or his male servant, or his female servant, his ox, or his donkey, or anything that is your neighbor’s.”
Aside from missing a few things, our "hillbilly list" isn't bad at all.  Why?  Because of what it tries to do; namely, take a Biblical teaching and put it in the vernacular.  Something we can understand and apply to our daily lives.  Just as long as we understand this, we are fine.  Don't try to correct our reclining friend, appreciate his attitude and try to understand more of the Bible ourselves.  Now, on to the New Testament....
Email ThisBlogThis!Share to TwitterShare to FacebookShare to Pinterest

Neither shall they learn war anymore by Mark Copeland

http://executableoutlines.com/text/mic4_1.htm
Oh, it this were a reality... Gary
Email ThisBlogThis!Share to TwitterShare to FacebookShare to Pinterest
Newer Posts Older Posts Home
Subscribe to: Posts (Atom)