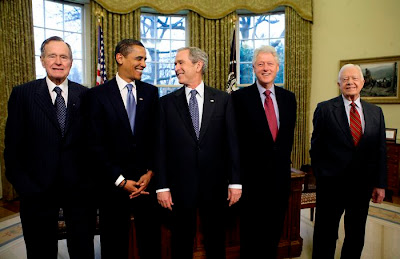 Five presidents of the United States of America. From Jimmy Carter in the 70's to our current Barak Obama, they have led our country. I wonder, which one of them was the greatest? In my book the greatest one isn't even there; for Ronald Regan isn't there. And even he had his faults. So, who really is the greatest? Well, we could argue this all day and all night, but does it really matter? What matters is that they all served (or are serving) our country the best they could. The following passage from Matthew talks a bit about greatness, service and sacrifice.
Matthew 20:17-28 (WEB)
17) As Jesus was going up to Jerusalem, he took the twelve disciples aside, and on the way he said to them,
18) “Behold, we are going up to Jerusalem, and the Son of Man will be delivered to the chief priests and scribes, and they will condemn him to death,
19) and will hand him over to the Gentiles to mock, to scourge, and to crucify; and the third day he will be raised up.”
20) Then the mother of the sons of Zebedee came to him with her sons, kneeling and asking a certain thing of him.
21) He said to her, “What do you want?” She said to him, “Command that these, my two sons, may sit, one on your right hand, and one on your left hand, in your Kingdom.”
22) But Jesus answered, “You don’t know what you are asking. Are you able to drink the cup that I am about to drink, and be baptized with the baptism that I am baptized with?” They said to him, “We are able.”
23) He said to them, “You will indeed drink my cup, and be baptized with the baptism that I am baptized with, but to sit on my right hand and on my left hand is not mine to give; but it is for whom it has been prepared by my Father.”
24) When the ten heard it, they were indignant with the two brothers.
25) But Jesus summoned them, and said, “You know that the rulers of the nations lord it over them, and their great ones exercise authority over them.
26) It shall not be so among you, but whoever desires to become great among you shall be your servant.
27) Whoever desires to be first among you shall be your bondservant,
28) even as the Son of Man came not to be served, but to serve, and to give his life as a ransom for many.” (Matthew 20:17-28, WEB)

Having said Ronald Regan was the greatest was based upon what I think he did for the country and his efforts caused me to give him this title. Even he didn't do what Jesus did; for Jesus changed the lives of untold millions upon millions of people. Now that is greatness; continued service for 2000 years and counting. As great as the men in the picture are, they will never top that record.

By the way, the man with the highest I.Q. is Jimmy Carter. Coming in at 167, he is the smartest.
Email ThisBlogThis!Share to TwitterShare to FacebookShare to Pinterest
Newer Posts Older Posts Home
Subscribe to: Posts (Atom)