The power of foolishness 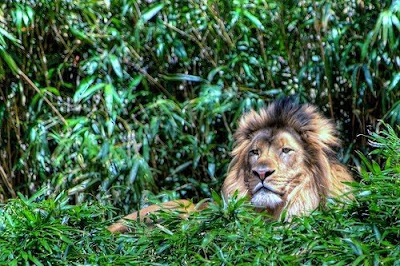 Anyone who knows me well, knows I like lions, but you may not know why. Its easy to see why someone would like them, for they are noble beasts, but for me that's really not the reason. To me lions are a representation of the power of God, of Jesus, the lamb of God who is really The lion of the tribe of Judah. To many this may sound like foolishness, but consider the following passage from 1 Corinthians with one from the book of Revelation.
1Co 1:18 For the word of the cross is foolishness to those who are dying, but to us who are saved it is the power of God.
1Co 1:19 For it is written, "I will destroy the wisdom of the wise, I will bring the discernment of the discerning to nothing."
1Co 1:20 Where is the wise? Where is the scribe? Where is the lawyer of this world? Hasn't God made foolish the wisdom of this world?
1Co 1:21 For seeing that in the wisdom of God, the world through its wisdom didn't know God, it was God's good pleasure through the foolishness of the preaching to save those who believe.
1Co 1:22 For Jews ask for signs, Greeks seek after wisdom,
1Co 1:23 but we preach Christ crucified; a stumbling block to Jews, and foolishness to Greeks,
1Co 1:24 but to those who are called, both Jews and Greeks, Christ is the power of God and the wisdom of God.
1Co 1:25 Because the foolishness of God is wiser than men, and the weakness of God is stronger than men.
and
Rev 5:1 I saw, in the right hand of him who sat on the throne, a book written inside and outside, sealed shut with seven seals.
Rev 5:2 I saw a mighty angel proclaiming with a loud voice, "Who is worthy to open the book, and to break its seals?"
Rev 5:3 No one in heaven above, or on the earth, or under the earth, was able to open the book, or to look in it.
Rev 5:4 And I wept much, because no one was found worthy to open the book, or to look in it.
Rev 5:5 One of the elders said to me, "Don't weep. Behold, the Lion who is of the tribe of Judah, the Root of David, has overcome; he who opens the book and its seven seals."
Rev 5:6 I saw in the midst of the throne and of the four living creatures, and in the midst of the elders, a Lamb standing, as though it had been slain, having seven horns, and seven eyes, which are the seven Spirits of God, sent out into all the earth.
Rev 5:7 Then he came, and he took it out of the right hand of him who sat on the throne.
Rev 5:8 Now when he had taken the book, the four living creatures and the twenty-four elders fell down before the Lamb, each one having a harp, and golden bowls full of incense, which are the prayers of the saints.
Rev 5:9 They sang a new song, saying, "You are worthy to take the book, and to open its seals: for you were killed, and bought us for God with your blood, out of every tribe, language, people, and nation,

Even the foolishness of God is more powerful than the greatest strength in either Earth or heaven. Satan tricked man into sin; that one, and then Jesus was crucified and Satan said, "That's two", but God said: Jesus won. That's how a lamb becomes a lion and that's something to roar about.
Email ThisBlogThis!Share to TwitterShare to FacebookShare to Pinterest
Newer Posts Older Posts Home
Subscribe to: Posts (Atom)