Many thanks to Terry Grams at northernpartners.com.  By the way, this is a great website if you are interested in railroad pocket watches!!!
Email ThisBlogThis!Share to TwitterShare to FacebookShare to Pinterest 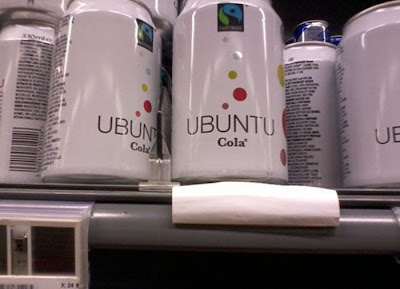 During the past 12 months, a good friend of mine (Bruce Arnold) introduced me to an alternative to Microsoft Windows operating systems, Linux UBUNTU.  This open source system is free, runs faster and more reliably than Windows and has thousands of free programs.  Question: Why would I ever want to stay with the Microsoft products?  Aside from a very few programs that I haven't outgrown, I have no good reason to stay with the overrated, overpriced, clunky "standard".  Which brings me to the picture.  Does anyone out there know where I can buy this...???  Admittedly, its a shot in the dark, but right now I would at least try something new; who knows, maybe it will be GREAT!!!  Whether or not it will be better is any one's guess, but I am in the mood for something NEW, SOMETHING BETTER.  Its hard NOT to think of the book of Hebrews when I think of something BETTER....

Hebrews, Chapter 10
1 For the law, having a shadow of the good to come, not the very image of the things, can never with the same sacrifices year by year, which they offer continually, make perfect those who draw near.  2 Or else wouldn’t they have ceased to be offered, because the worshippers, having been once cleansed, would have had no more consciousness of sins?  3 But in those sacrifices there is a yearly reminder of sins.  4 For it is impossible that the blood of bulls and goats should take away sins.  5 Therefore when he comes into the world, he says,“Sacrifice and offering you didn’t desire,but you prepared a body for me;  6 You had no pleasure in whole burnt offerings and sacrifices for sin.  7 Then I said, ‘Behold, I have come (in the scroll of the book it is written of me)to do your will, O God.’”  8 Previously saying, “Sacrifices and offerings and whole burnt offerings and sacrifices for sin you didn’t desire, neither had pleasure in them” (those which are offered according to the law), 9 then he has said, “Behold, I have come to do your will.” He takes away the first, that he may establish the second,  10 by which will we have been sanctified through the offering of the body of Jesus Christ once for all.  11 Every priest indeed stands day by day serving and often offering the same sacrifices, which can never take away sins,  12 but he, when he had offered one sacrifice for sins forever, sat down on the right hand of God;  13 from that time waiting until his enemies are made the footstool of his feet.  14 For by one offering he has perfected forever those who are being sanctified.  15 The Holy Spirit also testifies to us, for after saying,  16 “This is the covenant that I will make with them:‘After those days,’ says the Lord,‘I will put my laws on their heart,I will also write them on their mind;’”then he says,  17 “I will remember their sins and their iniquities no more.”  18 Now where remission of these is, there is no more offering for sin. 19 Having therefore, brothers, boldness to enter into the holy place by the blood of Jesus,  20 by the way which he dedicated for us, a new and living way, through the veil, that is to say, his flesh; 21 and having a great priest over the house of God,  22 let’s draw near with a true heart in fullness of faith, having our hearts sprinkled from an evil conscience, and having our body washed with pure water,  23 let us hold fast the confession of our hope without wavering; for he who promised is faithful.  24 Let us consider how to provoke one another to love and good works,  25 not forsaking our own assembling together, as the custom of some is, but exhorting one another; and so much the more, as you see the Day approaching.  26 For if we sin willfully after we have received the knowledge of the truth, there remains no more a sacrifice for sins, 27 but a certain fearful expectation of judgment, and a fierceness of fire which will devour the adversaries.  28 A man who disregards Moses’ law dies without compassion on the word of two or three witnesses.  29 How much worse punishment, do you think, will he be judged worthy of, who has trodden under foot the Son of God, and has counted the blood of the covenant with which he was sanctified an unholy thing, and has insulted the Spirit of grace?  30 For we know him who said, “Vengeance belongs to me,” says the Lord, “I will repay.”Again, “The Lord will judge his people.”  31 It is a fearful thing to fall into the hands of the living God.

The nation of Israel had a long history of rebelling against God.  They rebelled time and time again, only to realize their error after prolonged suffering.  But the problem was that they could not completely keep God's law and violation demanded punishment.  Enter Jesus and a new way, a better way; faith.  Instead of law breaking, faith-living became the standard.  Jesus made things very personal by HIS sacrifice.  He made one sacrifice (himself) for sins and had done with it; which, of course is much better than repeated offerings. This makes things simpler which is better.  Which is why I migrated to Ubuntu.  Now, if can only find this cola....
Email ThisBlogThis!Share to TwitterShare to FacebookShare to Pinterest

1Sa 6:1 The ark of Yahweh was in the country of the Philistines seven months.
1Sa 6:2 The Philistines called for the priests and the diviners, saying, "What shall we do with the ark of Yahweh? Show us with which we shall send it to its place."
1Sa 6:3 They said, "If you send away the ark of the God of Israel, don't send it empty; but by all means return him a trespass offering: then you shall be healed, and it shall be known to you why his hand is not removed from you."
1Sa 6:4 Then they said, "What shall be the trespass offering which we shall return to him?" They said, "Five golden tumors, and five golden mice, according to the number of the lords of the Philistines; for one plague was on you all, and on your lords.
1Sa 6:5 Therefore you shall make images of your tumors, and images of your mice that mar the land; and you shall give glory to the God of Israel: peradventure he will lighten his hand from off you, and from off your gods, and from off your land.
1Sa 6:6 Why then do you harden your hearts, as the Egyptians and Pharaoh hardened their hearts? When he had worked wonderfully among them, didn't they let the people go, and they departed?
1Sa 6:7 Now therefore take and prepare yourselves a new cart, and two milk cows, on which there has come no yoke; and tie the cows to the cart, and bring their calves home from them;
1Sa 6:8 and take the ark of Yahweh, and lay it on the cart; and put the jewels of gold, which you return him for a trespass offering, in a coffer by its side; and send it away, that it may go.
1Sa 6:9 Behold; if it goes up by the way of its own border to Beth Shemesh, then he has done us this great evil: but if not, then we shall know that it is not his hand that struck us; it was a chance that happened to us."
1Sa 6:10 The men did so, and took two milk cows, and tied them to the cart, and shut up their calves at home;
1Sa 6:11 and they put the ark of Yahweh on the cart, and the coffer with the mice of gold and the images of their tumors.
1Sa 6:12 The cows took the straight way by the way to Beth Shemesh; they went along the highway, lowing as they went, and didn't turn aside to the right hand or to the left; and the lords of the Philistines went after them to the border of Beth Shemesh.
1Sa 6:13 They of Beth Shemesh were reaping their wheat harvest in the valley; and they lifted up their eyes, and saw the ark, and rejoiced to see it.
1Sa 6:14 The cart came into the field of Joshua of Beth Shemesh, and stood there, where there was a great stone: and they split the wood of the cart, and offered up the cows for a burnt offering to Yahweh.
1Sa 6:15 The Levites took down the ark of Yahweh, and the coffer that was with it, in which the jewels of gold were, and put them on the great stone: and the men of Beth Shemesh offered burnt offerings and sacrificed sacrifices the same day to Yahweh.
1Sa 6:16 When the five lords of the Philistines had seen it, they returned to Ekron the same day.
1Sa 6:17 These are the golden tumors which the Philistines returned for a trespass offering to Yahweh: for Ashdod one, for Gaza one, for Ashkelon one, for Gath one, for Ekron one;
1Sa 6:18 and the golden mice, according to the number of all the cities of the Philistines belonging to the five lords, both of fortified cities and of country villages, even to the great stone, whereon they set down the ark of Yahweh, which stone remains to this day in the field of Joshua of Beth Shemesh.
1Sa 6:19 He struck of the men of Beth Shemesh, because they had looked into the ark of Yahweh, he struck of the people fifty thousand seventy men; and the people mourned, because Yahweh had struck the people with a great slaughter.
1Sa 6:20 The men of Beth Shemesh said, Who is able to stand before Yahweh, this holy God? and to whom shall he go up from us?
1Sa 6:21 They sent messengers to the inhabitants of Kiriath Jearim, saying, The Philistines have brought back the ark of Yahweh; come down, and bring it up to yourselves.

"ACTS OF THE APOSTLES" Chapter Twenty by Mark Copeland